Pope tells Jesuits to walk to peripheries, be open to future 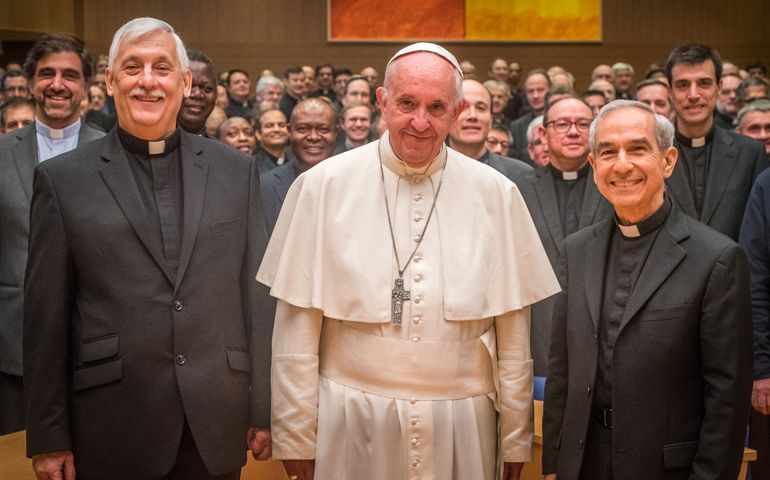 Pope Francis, speaking both as pope and a Jesuit, asked members of the Society of Jesus to continue to journey to where Christ is most needed, and always ask God for consolation, compassion and help in discernment.

The Jesuits aim to "move forward, overcoming the impediments which the enemy of human nature puts in our way when, in serving God, we are seeking the greater good," the pope told more than 200 Jesuits chosen to represent the more than 16,000 Jesuits at the order's general congregation.

Given that the Society of Jesus' way of proceeding for "the greater good is accomplished through joy, the cross and through the church, our mother," the pope said he wished to help revive its zeal for mission by reflecting on those three points.

Instead of the usual custom of general congregation delegates going to the Vatican to meet the pope, Pope Francis went to the Jesuits' Rome headquarters Oct. 24 to meet them. He was greeted by Venezuelan Fr. Arturo Sosa, who was elected superior general of the order Oct. 14, as well as by other members. He spent more than three hours at the headquarters, including time devoted to a "private conversation," according to the Vatican press office.

After taking part in morning prayer with the delegates, Pope Francis delivered a lengthy reflection on how the Society of Jesus can best serve God, the church and the world, while remaining true to its Ignatian identity and zeal for mission.

He said the Jesuit way of journeying and moving forward as followers of the Lord requires: asking God insistently for consolation; allowing oneself to be moved by Jesus crucified on the cross for one's sins; and doing good by being led by the Holy Spirit and by thinking with the church.

The true work of the Jesuits, he said, is to offer the people of God consolation and help them so that "the enemy of human nature does not rob us of joy — the joy of evangelizing, the joy of the family, the joy of the church, the joy of creation."

May this joy not be stripped from "us, either by despair before the magnitude of the evils of the world or by the misunderstandings between those who intend to do good," he said, and may it not be replaced "with foolish joys that are always at hand in all human enterprises."

Even when feeling unworthy, Jesuits should still pray persistently for consolation so that they may be a sincere, joyful bearers of the Gospel, he said.

"Good news cannot be given with a sad face. Joy is not a decorative 'add-on'" nor is it a cosmetic, "special effect," he said. "It is a clear indicator of grace; it shows that love is active, working and present."

"This joy of the explicit proclamation of the Gospel — through preaching the faith and practicing justice and mercy — is that which leads the Society to go to all the peripheries," the pope said. "The Jesuit is a servant of the joy of the Gospel."

Jesuits can move forward by "letting ourselves be moved by the Lord placed on the cross — by him in person and by him present in so many of our brothers and sisters who are suffering (and are) the great majority of humankind," he said, quoting the late-Fr. Pedro Arrupe who said that wherever there is pain, the Society of Jesus is there.

God's mercy isn't an abstract term, but "a lifestyle," Pope Francis said. Too often, people "dilute" the life-giving power of mercy with "our abstract formulations and legalistic conditions."

God "looks upon us with mercy and chooses us," sending people out to bring that same mercy "to the poorest, to sinners, to 'discarded' people and those crucified in the present world, who suffer injustice and violence."

Only when people experience firsthand God's healing mercy on their own wounds "will we lose the fear of allowing ourselves be moved by the immense suffering of our brothers and sisters, and will we hasten to walk patiently with our people, learning from them the best way of helping and serving them."

Lastly, journeying forward in doing good requires the grace of discernment — so that actions are inspired by "the good Spirit," which roots people to the church, he said.

It is in the church that the Holy Spirit works and "distributes the diversity of her charisms for the common good," Pope Francis said. The importance of thinking with the church is what lies behind the Jesuit St. Peter Faber's insistence that "those who wanted to reform the church were right, but that God did not want to correct it through their means."

Thinking with the church, "without losing peace and with joy, considering the sins we see, in us as well as in others, and in the structures that we have created, involves carrying the cross, experiencing poverty and humiliations," he said.

St. Ignatius advised personal reflection before speaking or acting in response to clear contradictions in order to operate according to the good Spirit. His invitation is not so much a guideline for how to respond to controversy, but a reminder to "act against" an anti-ecclesial spirit and orient oneself fully toward the mother — the church — "not to justify a debatable position, but to make room so that the Spirit could act in its own time."

Pope Francis said that serving the Holy Spirit with discernment "makes us men of the church — not clerical, but ecclesial — men for others."

"We don't walk alone or comfortably, but we walk with 'a heart that does not rest, that does not close in on itself but beats to the rhythm of a journey undertaken together with all the people faithful to God,'" he said.

Vatican | Pope tells Jesuits to walk to peripheries, be open to future

Nigerian Jesuit calls new superior general 'someone you can relate with'