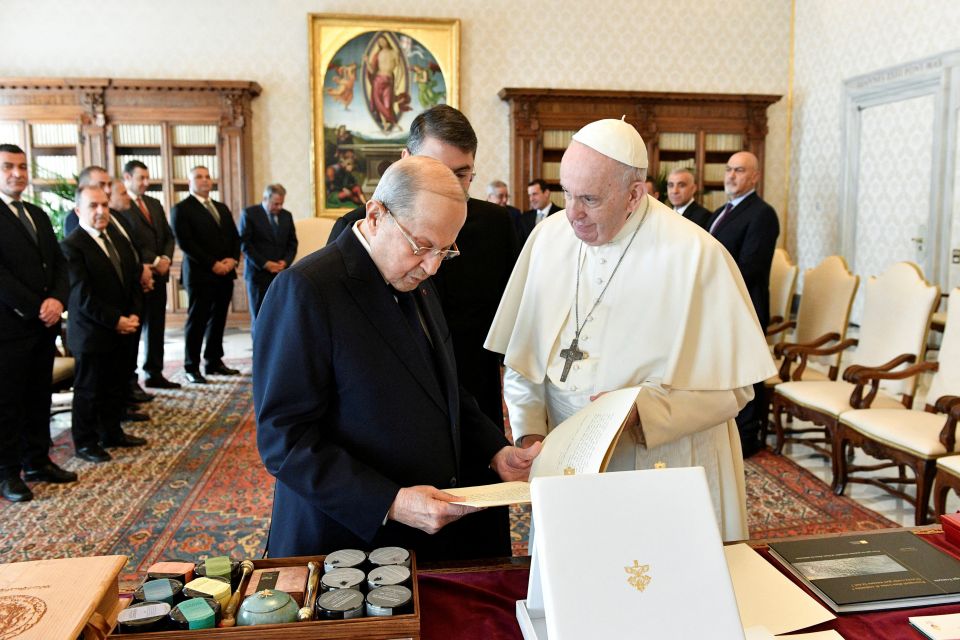 BEIRUT — Pope Francis told Lebanon's president the country has a special place in his prayers, and he reiterated his intention to visit.

During his March 21 meeting at the Vatican with President Michel Aoun, a Maronite Catholic, Pope Francis noted that, despite the current tense international situation, "Lebanon does not lose sight of concerns of the Holy See," Lebanon's national news agency reported.

Although it was not mentioned in the official Vatican statement about the meeting, the news agency reported Pope Francis again said he intends to visit Lebanon, without specifying a possible date.

"Soon I will visit Lebanon. This is a decision I have made, because Lebanon remains ... a model for the world," Pope Francis was reported to have said.

"Suffering Lebanon looks forward to your visit, as a living proof of its resurrection," Aoun told Pope Francis. "We hope that your visit to our land will be realized as soon as possible."

"I am looking forward to this visit as a glimmer of hope," Aoun said, noting that a papal visit would help confirm Lebanon as a model for living together. "We still consider Lebanon today as a center of convergence in the world between Christianity and Islam."

Since 2019, Lebanon has been mired in what the World Bank has described as one of the worst financial meltdowns in history. Nearly 80% of the population has fallen into poverty in the previously middle-income country.

The Lebanese president thanked Pope Francis on behalf of the Lebanese "for your solidarity with its people during the unprecedented series of crises it is going through."

"Lebanese, Christians and Muslims, are suffering from the consequences of these crises, and they are determined together to defeat them" the president said.

"We have recently witnessed a massive wave of emigration abroad," in particular among the highly educated, Aoun told Pope Francis. This exodus, he said, "poses a threat to identity and pluralism in Lebanon and contributes to weakening the Christian presence in the East."

Pope: Priests are called to console, not heap obligations on people