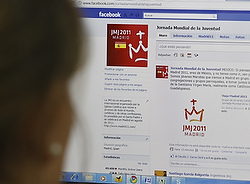 So it’s fitting that the real Pope Benedict XVI on Monday cautioned against creating false online profiles on social networks that are now an “integral part of human life.”

In the Vatican’s latest effort to come to terms with 21st-century technology, Benedict blessed the use of social networks but also warned that digital communication poses special dangers to Christian values and face-to-face relationships.

The pope made his remarks in his annual message for the World Day of Social Communications, which is June 5.

The growth of the Internet offers “new and more complex intellectual and spiritual horizons [and] new forms of shared awareness” Benedict said, and encouraged Christians “to join the network of relationships which the digital era has made possible.”

But he cautioned that digital communication is typically “one-sided” and potentially misleading.

“In the search for sharing, for `friends’, there is the challenge to be authentic and faithful and not give in to the illusion of constructing an artificial public profile for oneself,” Benedict wrote.

The pope also emphasized that “virtual contact cannot and must not take the place of direct human contact with people at every level of our lives.”

Benedict recommended a distinctively “Christian way” of online life, in which a user’s “digital profile” and online activity are “fully consistent with the Gospel,” as well as “honest and open, responsible and respectful of others.”

The Vatican has had a mixed experience with the Internet since launching its first Web site in 1995.

According to a confidential 2009 cable from the U.S. embassy to the Vatican released last month as part of the WikiLeaks trove, “most of the top ranks of the Vatican —- all men, generally in their 70s —- do not understand modern media and new information technologies” and “many officials do not even have official e-mail accounts.”

Benedict himself has said a quick Google search could have spared him international condemnation when he decided in 2009 to lift the excommunication of ultra-traditionalist Bishop Richard Williamson, who was well known online as a vocal Holocaust denier.

“I have learned the lesson that in the future in the Holy See we will have to pay greater attention to that source of news,” the pope wrote at the time.

As part of the Vatican’s effort to get up to date, it launched a YouTube channel in 2009, and several Twitter accounts last year. A unified web portal bringing together all the Vatican’s major communication organs, including its press office and official newspaper, is supposed to appear by Easter.

Xt3.com, which started in 2008 as a Catholic version of Facebook, now has 50,000 users -- compared to Facebook’s 500 million -- and is mostly geared toward the World Youth Day celebrations held every three years.

At Monday’s press conference to present the Communications Day message, Vatican Archbishop Claudio Celli admitted the pope does not even use a computer, much less surf the web.

“He belongs to another culture,” Celli said, “He writes everything by hand, in very small handwriting that is hard to read.”

Vatican comes up to bat with own cricket team, may field female squad

Lent is a time for a little less hypocrisy, pope says

Contempt for life is the source of all evil, pope says