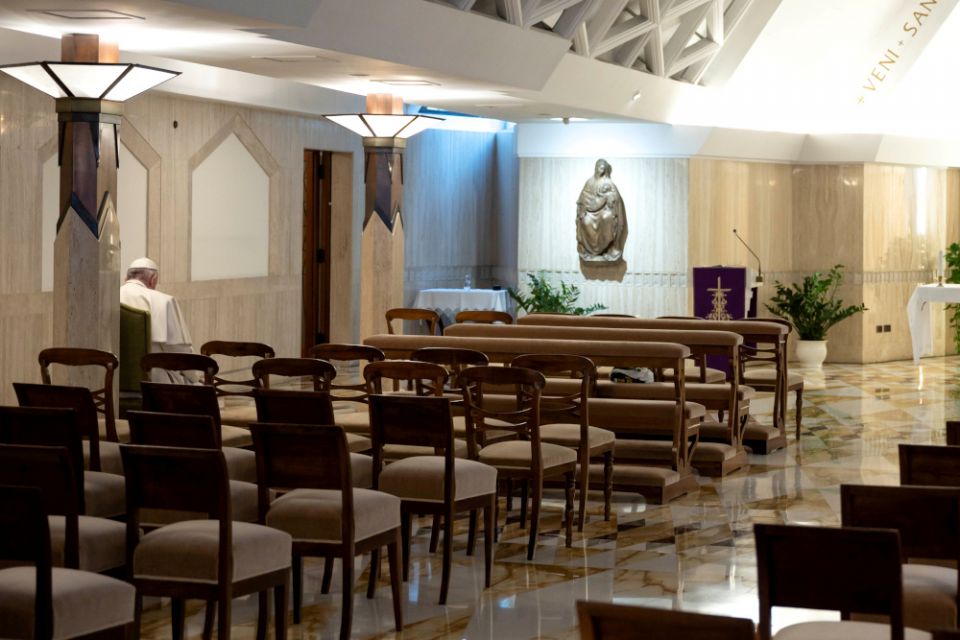 Pope Francis celebrates Mass in the chapel of his residence, the Domus Sanctae Marthae, at the Vatican March 10, 2020. For the second day this week the pope celebrated Mass without a small group of the faithful in order to avoid the risk of spreading the coronavirus. (CNS/Vatican Media)

Rome — Public Masses are banned throughout Italy, but literally thousands of Masses are celebrated each day and, in addition to watching them on television or computer screens, the faithful can receive "spiritual Communion."

Pope Francis, after reciting a livestreamed Angelus prayer March 15, told people, "United to Christ we are never alone, but instead form one body, of which he is the head. It is a union that is nourished with prayer and also with spiritual communion in the Eucharist, a practice that is recommended when it isn't possible to receive the sacrament."

Obviously, receiving Communion is the way to participate most fully in the Mass, but it is not always possible for everyone to receive at every Mass, nor do many Catholics in the world even have regular access to Mass.

The idea of "spiritual Communion" — inviting Jesus into one's heart and soul when receiving the actual sacrament isn't possible — is part of Catholic tradition.

In the 1700s, St. Alphonsus Liguori wrote a special prayer for spiritual communion: "My Jesus, I believe you are really here in the Blessed Sacrament. I love you more than anything in the world, and I hunger to receive you. But since I cannot receive Communion at this moment, feed my soul at least spiritually. I unite myself to you now as I do when I actually receive you."

Auxiliary Bishop Paolo Ricciardi of Rome, writing in the Vatican newspaper March 11, said, "This month all priests will continue to celebrate Masses and even if they cannot participate, Christians will continue to carry into the world the grace of years of abundance to face these weeks of famine."

The bishop prayed that acts of only spiritual Communion would help people "joyfully rediscover all of the good that the Eucharist has given us from the day of our first Communion."

"Let us increase our desire to receive it again at Easter with a renewed awareness of encountering the living Christ with joy on our faces and in our hearts — and not with those faces we sometimes see at Mass," he said, and "with a commitment to beginning again from the Eucharist to give life to the world."

In countries where Catholics can and do receive the sacrament frequently, they do not hear the term "spiritual Communion" very often, but it has been mentioned even in recent church documents.

The Vatican's preparatory document for the 2012 International Eucharistic Congress in Dublin said those who cannot receive the Eucharist can have spiritual Communion, declaring their desire to receiving the Eucharist and uniting "their suffering of that moment with the sacrifice of Jesus Christ."

The working document for the Synod of Bishops on the Eucharist in 2005 addressed the idea of offering up the sacrifice of being unable to receive Communion. It said: "Spiritual Communion, for example, is always possible for elderly persons and the sick who cannot go to church. In manifesting their love for the Eucharist, they participate in the communion of saints with great spiritual benefit for themselves and the church. By offering their sufferings to God, the church is enriched."

In "Sacramentum Caritatis," the document Pope Benedict XVI issued in 2007 reflecting on the synod, he cautioned people against thinking they had "a right or even an obligation" to receive the Eucharist every time they went to Mass.

"Even in cases where it is not possible to receive sacramental Communion, participation at Mass remains necessary, important, meaningful and fruitful. In such circumstances it is beneficial to cultivate a desire for full union with Christ through the practice of spiritual Communion," Benedict wrote.

Ideas for the future of Catholic liturgical reform