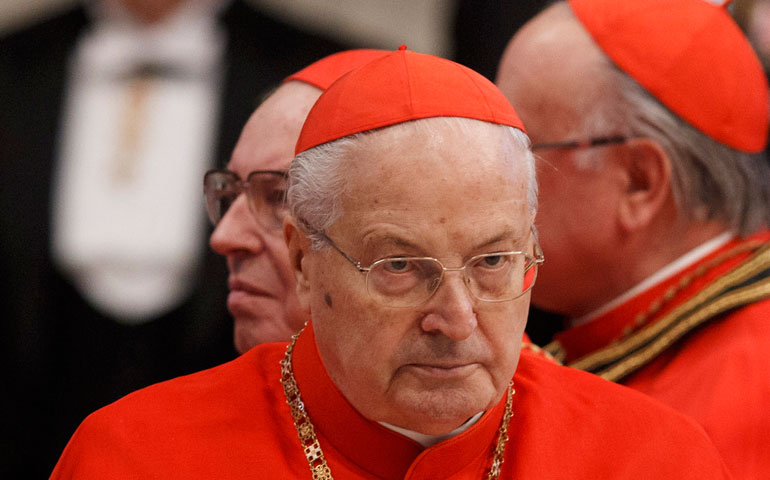 A coincidental confluence of monarchical events occurred in 2005, during the period between the death of Pope John Paul II and the election of Benedict XVI.

Through all of it the international media followed the flow of mourners, celebrators and ornately bedecked imitations of bygone eras as they made their way from castles to famous churches and back. It was a manner of reverse time-travel. All of the braided gold rope and draped epaulettes, feathered hats, shiny silver helmets, chests full of medals, gilded coaches, and endless reminders of dead kings and popes was enough to almost convince one that an age of Renaissance princes had somehow been recreated.

But there were differences, quickly apparent, among the pageants. In England and Monaco, amid joy and sorrow, the principals, privileged as they might be, walked as 21st-century intruders upon ancient ceremonials. They bore contemporary, real-life scars of tragic deaths and love gone sour. There was no retreat into some insular spirituality, no hiding away in a religious culture, though religion brought the most profound meaning to the events. The talk in these settings was not about some metaphysically infused heroic suffering. It was just suffering of the human sort, which is holy enough, the kind most of us bear no matter how elite, the kind where relationships need tending and there are children and others to worry about. In London and Monaco, the artifacts of royalty were symbols in service to a faded reality.

In Rome, the principals, privileged in their purple and red with matching skullcaps, in their fine lace and elaborate liturgical regalia, were ancient intruders trying to stave off 21st-century reality. In this monarchy, symbol is reality, or yet attempts to be, and the acting out daily occurs in the manner of court behavior and palace intrigue, much of it in secret and in service to a very alive clerical culture.

This triptych of monarchical display, England to the north, Monaco to the south and Rome in between, was itself an incisive analysis of the complex turmoil of the contemporary church. The Vatican is stuck, an ancient seed in amber waiting for someone to undo the encrustation and return it to the tradition’s fertile soil.

It is not merely the outward appearance of royalty that lashes the church to unworkable governance. It is more the daily expectation that royal privilege still applies. It is the presumption that somehow, in the 21st century, with the skeletons of unyielding hierarchy all around us, this monarchy will work where others have failed. The evidence, abundant and continuing to pile up, is that in many respects it is failing miserably. One wonders if the evidence will be part of the discussion when the cardinals sequester themselves next month to perform the most secret task in their secretive culture.

The churches of Europe are empty. The churches in the United States are emptying. Immigration and the growth of the church in the Southern Hemisphere are enough at the moment to balance the demographic nightmare and the effects of the ongoing scandal. If past is prologue, however, we know where this tale is headed. There is little reason to believe that the flawed template that has emptied the churches of the global North -- a model so dependent on accumulation of power, exclusion of women and laymen, and an ever more insular clerical culture -- will work differently in Africa, Asia or Latin America. One need not look long or far for the signs pointing toward a future unraveling of the institution in those places.

The horrid truth, most vividly exemplified in the priest sex abuse scandal and cover-up, is that church leaders have demonstrated beyond any reasonable doubt that the natural instinct of the clerical culture is to protect itself at all costs. That abuse occurs elsewhere, from homes to Boy Scout troops to schools and even other faith groups, may be consolation to some. As an institution, however, the church has shown itself to be singular in its determination and its elaborate schemes designed to hide so much sin and crime from so many for so long.

The cover-up of the abuse, with its intricate deceptions and denials, is the element proving ruinous to the church because it betrays the community at its deepest, sacramental level. Civil society will get its due, or as much of it as can be managed, however imperfectly, through law enforcement and the courts. The community, on the other hand, seeks healing that only the truth can supply.

Conclaves always raise hopes and expectations that a new figure in charge will mean a fresh direction, a new approach to fixing problems. But it is a naive hope if it doesn’t recognize what is glaringly apparent: The men most responsible for the greatest damage the church has suffered in centuries are the ones who will be gathering to select the pope. The cardinals assembled in conclave will include two from the United States -- Justin Rigali of Philadelphia and Roger Mahony of Los Angeles, both retired -- whose careers symbolize the serious breach of trust that exists in many locations between hierarchy and the faithful. They will be joined by Cardinal Sean Brady, whose role in the cover-up of Ireland’s sex abuse saga goes back to his days as a priest and canon lawyer.

They are three of the most prominent participants who will serve as reminders to others in the room of the ugly, secret truths about abuse of power and privilege that exist in chancery office files and rectories around the world, and of the utter lack of accountability required of members of the hierarchy.

Unable to vote, but overseeing the activities leading up to the conclave, will be the notorious Angelo Sodano, dean of the College of Cardinals, who has a long and well-documented record of protecting some of the worst perpetrators of fraud and sexual abuse the Vatican has known in recent decades. He attempted to block investigations and as recently as last year dismissed the abuse crisis as “petty gossip.”

In other settings, such perpetuation of ineptitude, disregard for the community and sheer corruption would be the engine of its own dissolution. After all, the Wall fell, there was an Arab Spring. Even Burma decided it had to change to survive.

The church has come some distance since the last century, when popes still had subordinates kneel before them, sometimes for extended periods, and when they yet believed the church to be “a perfect society, supreme in its own order.” The next pope will have to confront the question of how much further the church yet needs to go.

Also glaringly evident about the group of electors is that none is married and none is a woman. It would be extremely rare if any of them has raised children or been responsible for providing a household budget. Theirs is most often a world removed.

Whoever is selected will have to gauge whether his agenda overrides the compelling need to answer some fundamental questions: What caused so many of our leaders in so many places to violate the very core of our sacred texts? At what point in their training or in the course of their vocations did they come to understand that self-interest and protection of the clergy culture overrides all else?

And for the church in general: What do leaders do when fear no longer works to bring the crowds to church and to keep the faithful in line?

Benedict’s words at his last public Mass as pope were hardly triumphal. He acknowledged the “sins against the unity of the church, of the divisions in the body of the church.” One wonders if he had in mind the palace culture and the lust for power within it. He urged witnessing the faith “so that we can reveal the face of the church and how this face is at times disfigured.” That is a deeply disturbing image. The words acknowledge what we all know: The church is far from perfect.

Knowing that the profound goodness of God’s church will prevail -- living as we do within the inexplicable mix of divine and human responsibilities -- doesn’t excuse us from the work to be done. The institution has withstood two millennia of scandals and misdirection, ignorance and arrogance. It will certainly withstand this moment. First, however, the truth must be told. And then the palace and its culture might finally surrender to their rightful place somewhere in the distant past.

A version of this story appeared in the Mar 1-14, 2013 print issue under the headline: The Vatican is stuck in a monarchical past.