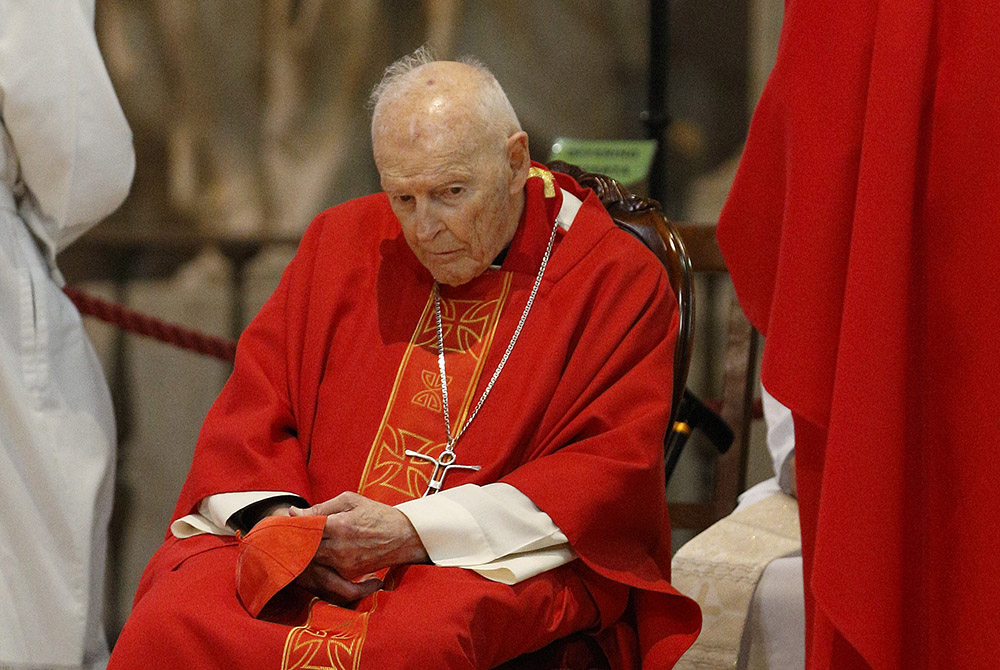 In an explosive report that calls into question the decision-making of three Catholic popes, the Vatican has revealed a series of institutional failures that led to the repeated promotion of now disgraced ex-cardinal Theodore McCarrick despite rumors of his alleged sexual misconduct with young men as early as the 1990s.

The Vatican places an abundance of responsibility on Pope John Paul II, who appointed McCarrick as archbishop of Washington in 2000 and made him a cardinal in 2001.

The report reveals that the late pontiff, now a Catholic saint, made those appointments despite being warned in 1999 by then-New York Cardinal John O'Connor that McCarrick had been the subject of anonymous allegations and was known to invite seminarians to sleep in the same bed as him.

The executive summary of the expansive 450-page text suggests that John Paul may have been blinded by his own prior friendship with McCarrick in the 1970s, and by his experience in communist Poland, where authorities would sometimes level false accusations against bishops in order to try and damage the church's reputation.

"Though there is no direct evidence, it appears likely from the information obtained that John Paul II's past experience in Poland regarding the use of spurious allegations against bishops to degrade the standing of the Church played a role in his willingness to believe McCarrick's denials," says the summary.

Beyond the Vatican, the text also places substantial blame at the feet of four Catholic bishops with ties to New Jersey, where McCarrick had been serving as Archbishop of Newark before being named to Washington.

It says the four bishops were asked in June 2000 about the allegations against McCarrick. Although the summary does not name the prelates, the full report does: James McHugh, Vincent Breen, Edward Hughes, and John M. Smith.

"What is now known … is that three of the four American bishops provided inaccurate and incomplete information to the Holy See regarding McCarrick's sexual conduct with young adults," states the report's summary. "This inaccurate information appears likely to have impacted the conclusions of John Paul II's advisors and, consequently, of John Paul II himself."

Related: The Vatican's McCarrick report: a roster of likely figures

Release of the Vatican's report on McCarrick's career has been hotly anticipated for more than two years.

Pope Francis first promised a "thorough study of the entire documentation" present in the Vatican's archives regarding the ex-cardinal in October 2018, following the shocking revelation that June that an allegation of sexual abuse by McCarrick had been found "credible and substantiated."

The pope's promise of an investigation also came two months after Archbishop Carlo Viganò, who served as the Vatican's ambassador to the United States from 2011-16, made a series of unsubstantiated accusations against dozens of former and current high-level officials, claiming a systemic cover-up of allegations against McCarrick.

The new report reveals, however, that as ambassador Viganò did not follow Vatican instructions to investigate allegations against McCarrick. 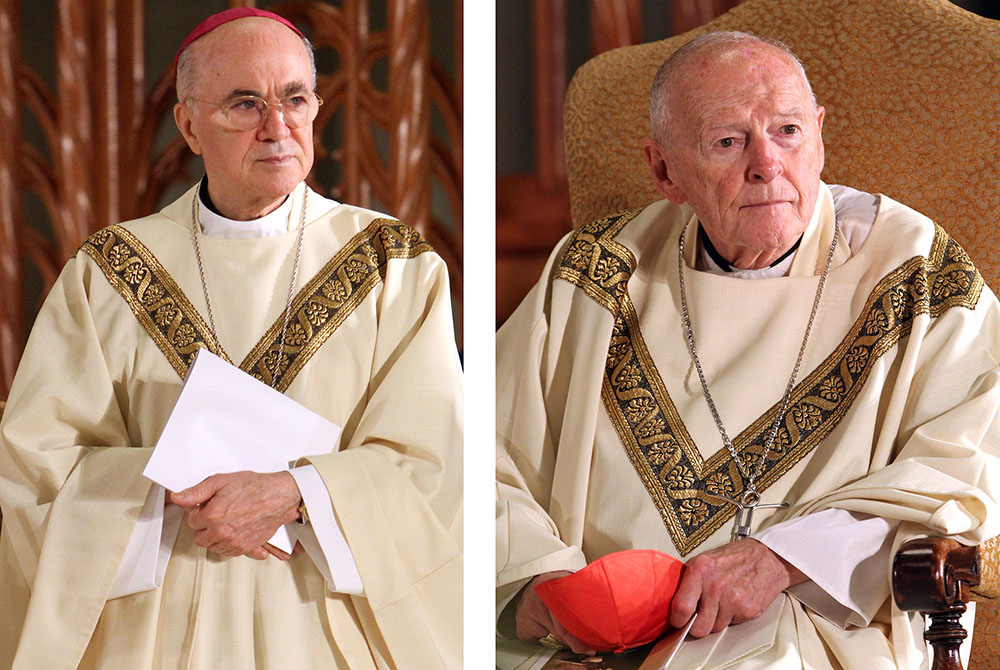 Archbishop Carlo Maria Vigano, then nuncio to the United States, and then-Cardinal Theodore McCarrick of Washington, are seen in a 2014 combination photo. (CNS/Gregory A. Shemitz)

Now aged 90, McCarrick was long one of the most influential prelates in the U.S. Catholic Church. He was an auxiliary bishop in New York from 1977-81 before leading the Diocese of Metuchen from 1981-86, the Archdiocese of Newark from 1986-2000, and the Archdiocese of Washington from 2000-06.

Francis confirmed McCarrick's removal from the priesthood, after a guilty finding by the Vatican's Congregation for the Doctrine of the Faith, in February 2019.

The report on McCarrick's rise was prepared by the Vatican's Secretariat of State, which says in the text's introduction that "no limit was placed on the examination of documents, the questioning of individuals or the expenditure of resources necessary to carry out the investigation."

Related: The Vatican's McCarrick report: a timeline of events

The secretariat says that in order to prepare the report it reviewed the documentation available about McCarrick's career at five Vatican offices and at the Vatican embassy to the U.S. It says it also conducted over 90 witness interviews with current and former Vatican officials, U.S. prelates, bishops' conference staffers and McCarrick's various secretaries.

Cardinal Pietro Parolin, the prefect of the secretariat, says in a Nov. 10 statement that his office is releasing the report "with sorrow for the wounds that these events have caused to the victims, their families, the Church in the United States, and the Universal Church."

"The investigation, as is well known, took two years of work and now that the text is made public it is possible to understand why it has taken time," states Parolin.

"Reading the document will show that all procedures, including the appointment of bishops, depend on the commitment and honesty of the people concerned," the cardinal continues. "No procedure, even the most detailed, is free from error because it involves the consciences and decisions of men and women."

The 14-page introduction to the report summarizes how Francis and his three immediate predecessors, Benedict XVI, John Paul II and Paul VI, each handled McCarrick. 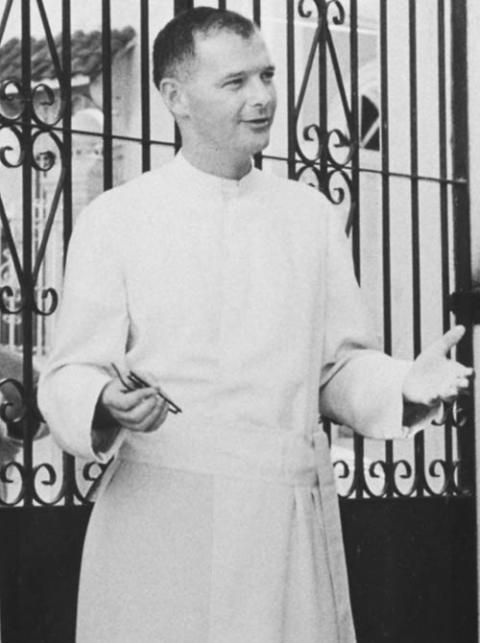 The only pope of the four who appears to emerge entirely unscathed is Paul VI. The summary states simply that when Paul named McCarrick as an auxiliary bishop in New York in 1977, "no one reported having witnessed or heard of McCarrick engaging in any improper behavior."

The summary focuses most of its attention on John Paul's decision to appoint McCarrick to Washington in 2000.

It says that at the time of that appointment there were three broad categories of allegations against McCarrick: from an unnamed Metuchen priest who claimed he had observed McCarrick engage in sex with a third priest in June 1987; anonymous letters sent to the Vatican embassy and "various" U.S. cardinals that "accused McCarrick of pedophilia" and claims that McCarrick shared beds with seminarians.

O'Connor, who served as archbishop of New York from 1984 until his death in May 2000, summarized the allegations in an Oct. 28, 1999 letter that was shared with John Paul II, the summary states.

"Information regarding McCarrick's conduct led to the conclusion that it would be imprudent to transfer him from Newark to another See on three occasions," states the text, identifying that McCarrick was passed over for openings in Chicago and New York, and was initially passed over when John Paul was looking for someone to replace Cardinal James Hickey in Washington.

John Paul's decision to then go forward with appointing McCarrick to Washington came after the four bishops with ties to New Jersey were asked for input on the allegations by Archbishop Gabriel Montalvo, then serving as the Vatican's ambassador to the U.S., in June 2000.

The full report makes clear that Montalvo considered the response from Hughes, who had headed the Diocese of Metuchen from 1987-97, as the most forthright. Hughes had advised that it would be "unwise to consider the Archbishop for any promotion or additional honor."

In that letter, McCarrick promised Dziwisz, now the retired cardinal archbishop of Krakow, Poland: "In the seventy years of my life, I have never had sexual relations with any person, male or female, young or old, cleric or lay, nor have I ever abused another person or treated them with disrespect."

The summary states: "McCarrick's denial was believed and the view was held that, if allegations against McCarrick were made public, McCarrick would be able to refute them easily."

At the time of the Washington appointment, the summary continues, "in part because of the limited nature of the Holy See's own prior investigations, the Holy See had never received a complaint directly from a victim, whether adult or minor, about McCarrick's misconduct."

"For this reason, McCarrick's supporters could plausibly characterize the allegations against him as 'gossip' or 'rumors,' " it states. 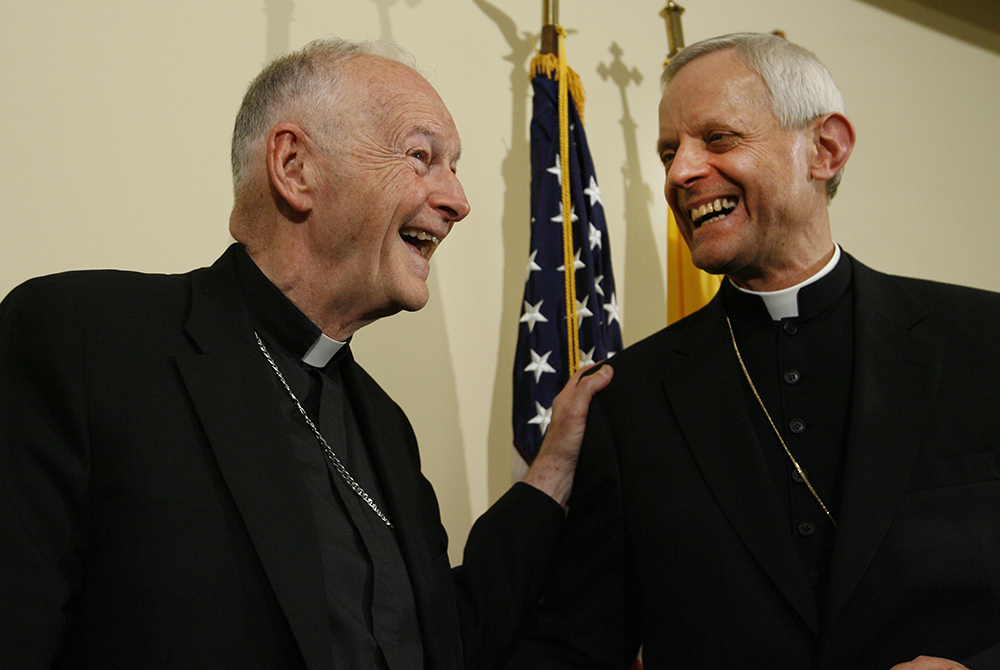 Then-Cardinal Theodore McCarrick of Washington and then-Archbishop Donald W. Wuerl smile during a 2006 news conference after introducing Wuerl as the new head of the Washington Archdiocese. (CNS/Paul Haring)

The report says that the allegation from the unnamed Metuchen priest who accused McCarrick of having sex with a third priest was originally not believed, in part because the accuser "had previously abused two teenage boys."

But it states that "new details" about that allegation emerged after John Paul II's death in 2005, which led Benedict XVI to request that McCarrick step down as archbishop of Washington in 2006.

"Over the next two years, Holy See officials wrestled with how to address issues regarding Cardinal McCarrick," states the report's summary.

Viganò, then serving as an official in the Secretariat of State, it states, wrote two memoranda, one in 2006 and one in 2008, about the allegations surrounding McCarrick. Cardinal Tarcisio Bertone, then the prefect of the secretariat, took the matter to Benedict.

"Ultimately, the path of a canonical process to resolve factual issues and possibly prescribe canonical penalties was not taken," states the summary. "Instead, the decision was made to appeal to McCarrick's conscience and ecclesial spirit by indicating to him that he should maintain a lower profile and minimize travel for the good of the Church." 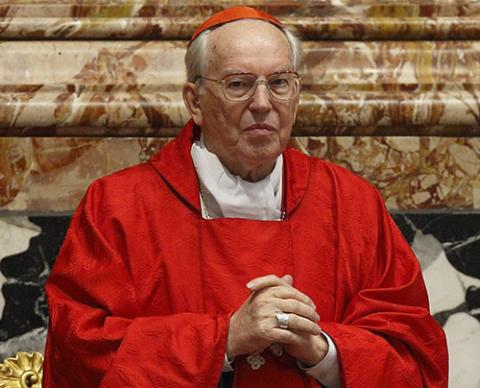 Cardinal Giovanni Battista Re, now dean of the College of Cardinals, in a 2019 photo (CNS/Paul Haring)

In 2006, Cardinal Giovanni Battista Re, then prefect of the Congregation for Bishops, instructed Archbishop Pietro Sambi, then the Vatican's ambassador to the U.S., "to convey these indications orally to McCarrick." Later, in 2008, Re "transmitted the indications to McCarrick in writing."

The Vatican acknowledges that while those measures were approved by Benedict, "the indications did not carry the Pope's explicit imprimatur, were not based on a factual finding that McCarrick had actually committed misconduct, and did not include a prohibition on public ministry."

"In the absence of canonical sanctions or explicit instructions from the Holy Father, McCarrick continued his activities," the summary states.

Towards the end of Benedict's papacy, the summary says another unnamed Metuchen priest informed Viganò of a lawsuit alleging sexual conduct took place between the priest and McCarrick in 1991. (Viganò replaced Sambi as the Vatican's ambassador to the U.S. in 2011.)

Cardinal Marc Ouellet, then and currently the head of the Congregation for Bishops, instructed Viganò "to take certain steps, including an inquiry with specific diocesan officials and [the priest] to determine if the allegations were credible," states the summary.

"Viganò did not take these steps and therefore never placed himself in the position to ascertain the credibility of [the priest]," it states. "McCarrick continued to remain active."

Related: 'We want the truth': Catholics hope for honesty in McCarrick report

Coming to Pope Francis, the summary says the current pontiff never lifted or modified the "indications" that were given to McCarrick by Re in 2006 and 2008. Although Viganò has claimed that he spoke to Francis about McCarrick in 2013, "no records support Viganò's account and evidence as to what he said is sharply disputed," it states.

"Until 2017, no one … provided Pope Francis with any documentation regarding allegations against McCarrick," it continues.

"Pope Francis had heard only that there had been allegations and rumors related to immoral conduct with adults occurring prior to McCarrick's appointment to Washington," the summary states.

"Believing that the allegations had already been reviewed and rejected by Pope John Paul II, and well aware that McCarrick was active during the papacy of Benedict XVI, Pope Francis did not see the need to alter the approach that had been adopted in prior years."

Editor's Note: This story has been updated since initial publication to include additional details from the Vatican's report on disgraced ex-cardinal Theodore McCarrick's career.