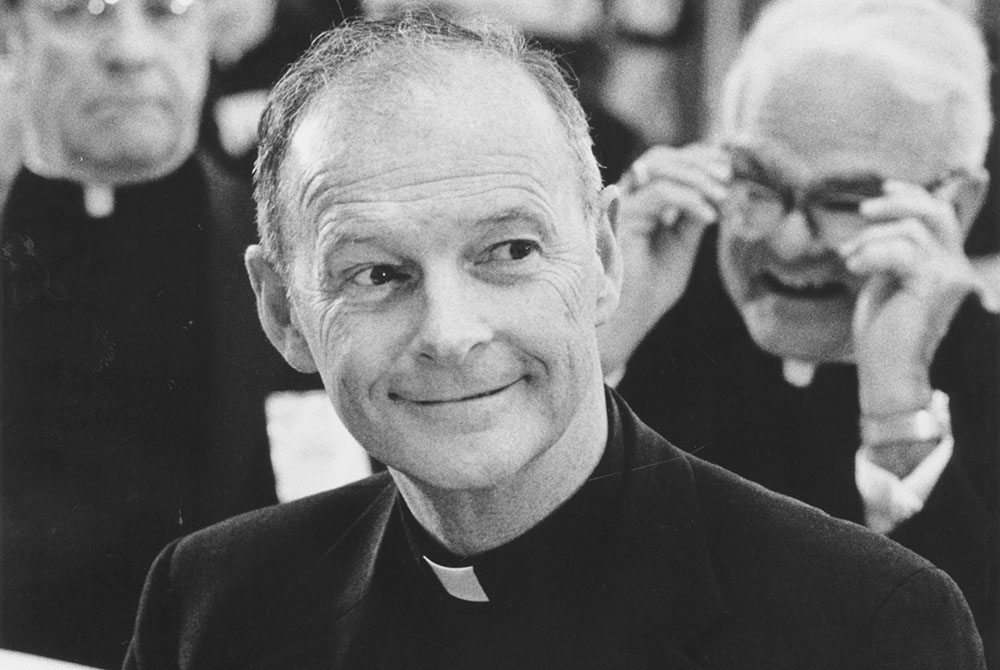 Theodore McCarrick had a nearly six-decade-long career as a priest, bishop and cardinal before revelations about his sexual abuse of young men led to his removal from the priesthood in 2019.

To help prepare for the expected Nov. 10 release of the Vatican's report on how the disgraced ex-cardinal was able to rise through the ranks of the American hierarchy, NCR has prepared the following timeline of some of the major events in McCarrick's career. 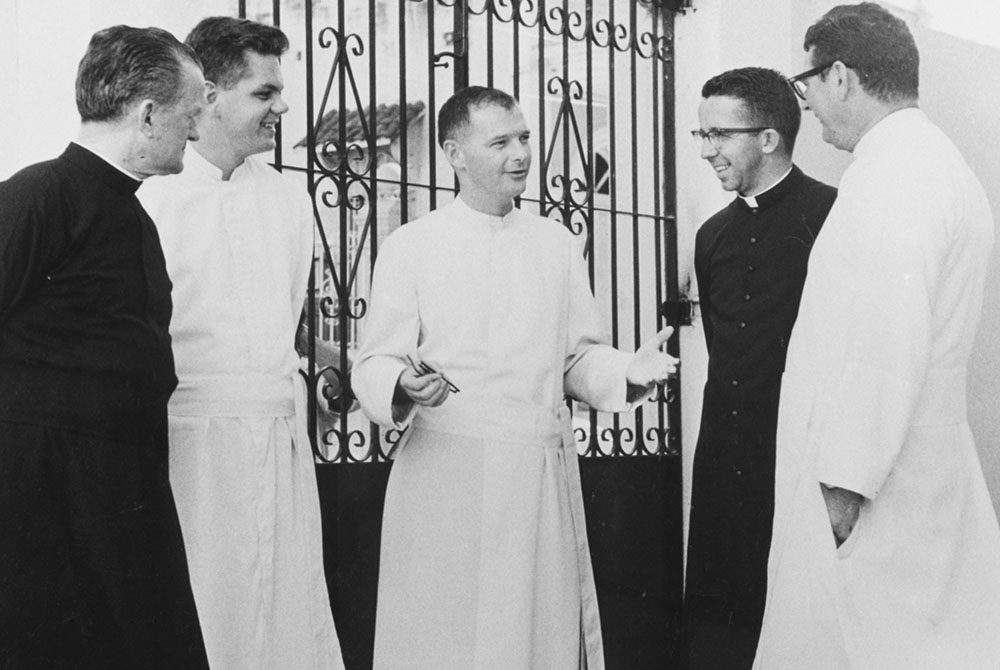 McCarrick serves as the president of the Catholic University of Puerto Rico. He is made a monsignor by Pope Paul VI in 1965. 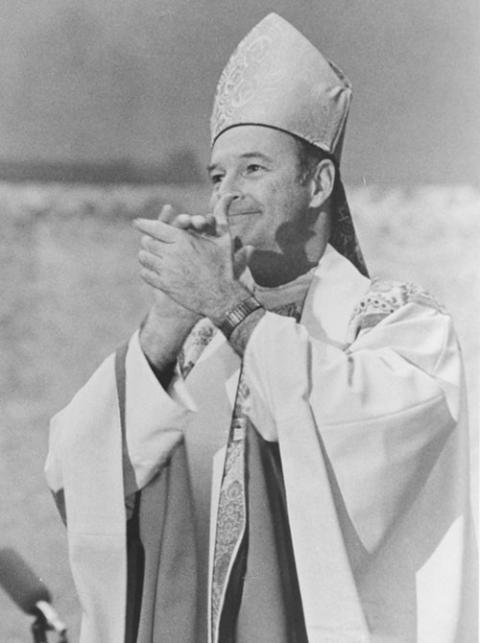 Spellman recalls McCarrick back to New York, where the young monsignor serves first as an associate secretary of education for the archdiocese, and then as the cardinal's personal secretary.

During this period, James Grein alleges that McCarrick repeatedly abused him while Grein was in his teenage years. In a July 19, 2018 New York Times report, Grein said he and McCarrick would go on trips and spend nights in hotel rooms together, where McCarrick would touch Grein sexually.

Pope Paul VI appoints McCarrick as the titular bishop of Rusibisir and an auxiliary bishop of New York. 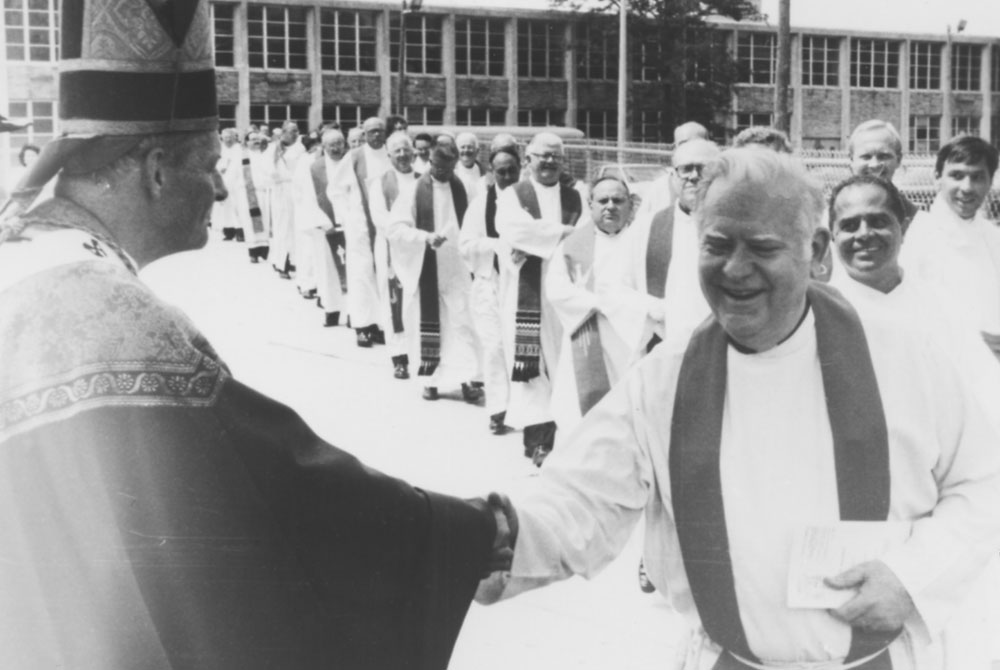 Theodore McCarrick, left, arrives at the Cathedral of the Sacred Heart for his installation as archbishop of Newark, New Jersey, in 1986. (CNS/D.J. Zehnder)

The Metuchen Diocese buys a beach house for McCarrick in Sea Girt, New Jersey. In a July 16, 2018 report, the New York Times details rumors that McCarrick would invite seminarians to that beach house for sleepovers. 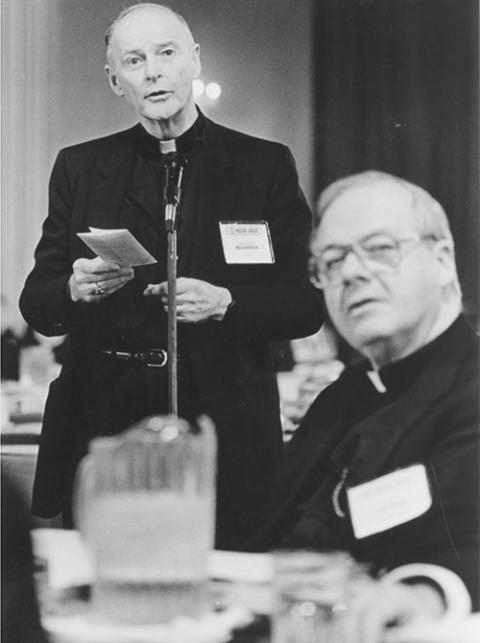 Archbishop Theodore McCarrick of Newark, New Jersey, speaks from the assembly during a session of the U.S. bishops' meeting in Washington in November 1994. (CNS/Al Stephenson)

Archbishop Agostino Cacciavillan, the Vatican's representative in the U.S., reports rumors about McCarrick's behavior with seminarians to New York Cardinal John O'Connor. In an October 2018 interview with Catholic News Service, Cacciavillan said a woman who called him in 1994 was worried there could be a "media scandal" during Pope John Paul II's 1995 visit to the U.S.

Cacciavillan says O'Connor conducted an inquiry and found "no obstacle" to John Paul II's plan to visit Newark as part of his journey to the U.S.

In a September 2018 Catholic News Service interview, Ramsey reveals he only got a brief response from the Vatican to his letter in October 2006. 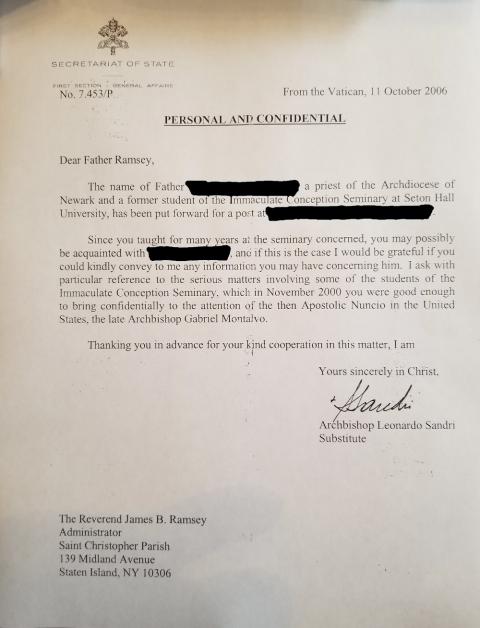 The Diocese of Metuchen, New Jersey, receives at least three unspecified complaints against McCarrick. The diocesan communications director, Erin Friedlander, reveals receipt of the complaints in an Aug. 24, 2018 interview with Catholic News Service, saying each was investigated at the time and reported to local authorities.

Friedlander says the Dioceses of Metuchen and Trenton and the Archdiocese of Newark paid $53,333.34 in one non-public settlement and $100,000 in another non-public settlement. The second settlement was made with a former priest who says he was abused by McCarrick. That priest was later barred from ministry after admitting to his own separate sexual misconduct. 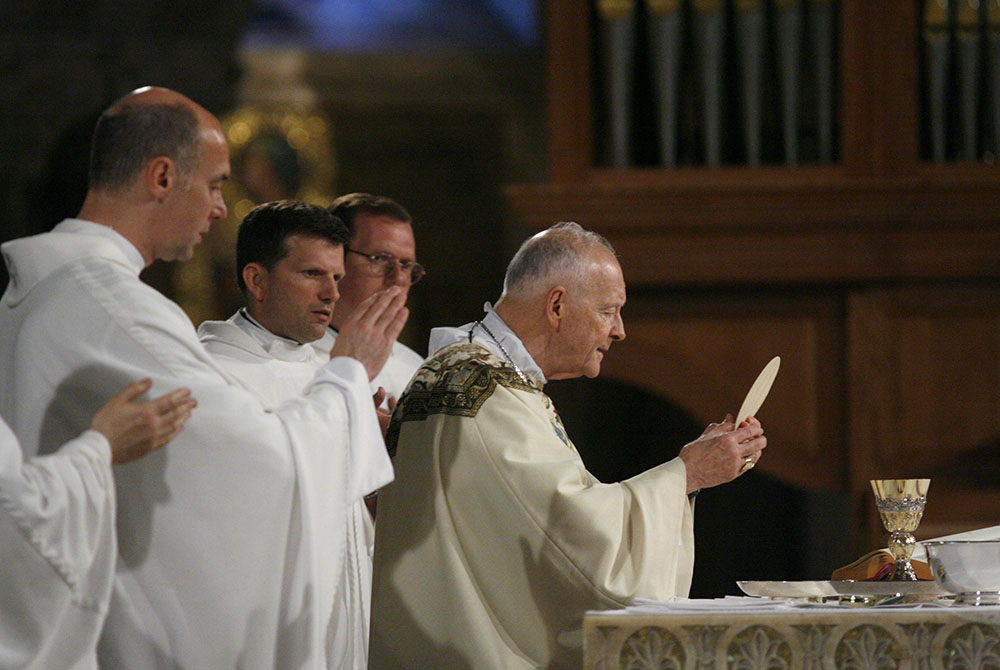 Then-Cardinal Theodore McCarrick, retired archbishop of Washington, celebrates a Mass marking the start of the Year for Priests June 19, 2009, at the Basilica of the National Shrine of the Immaculate Conception in Washington. (CNS/Nancy Wiechec) 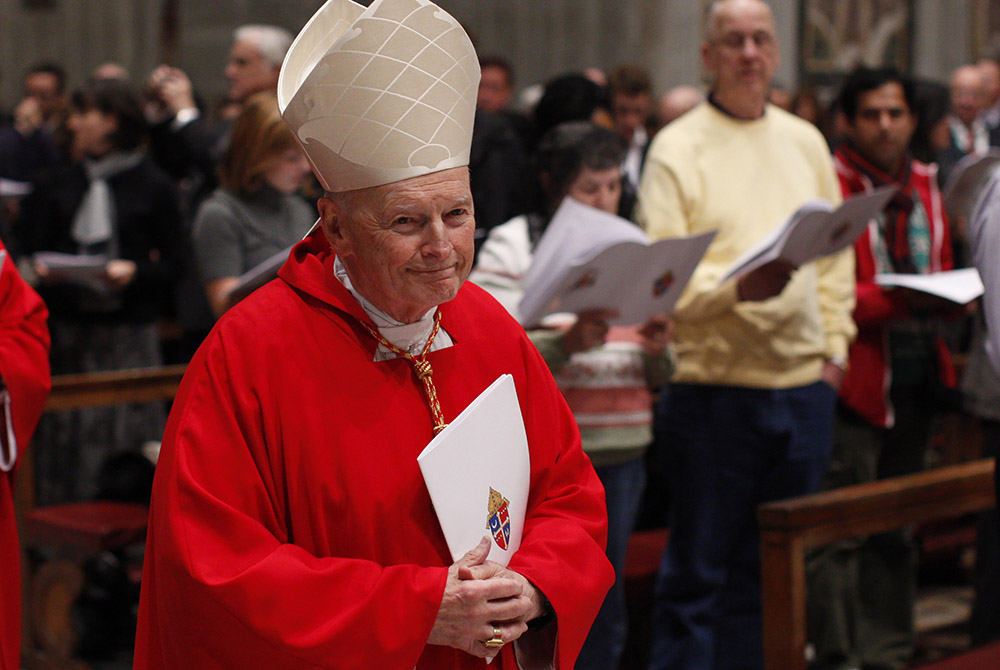 Then-Cardinal Theodore McCarrick, retired archbishop of Washington, arrives in procession for a Mass of thanksgiving for Cardinal Donald Wuerl of Washington in St. Peter's Basilica at the Vatican Nov. 22, 2010. (CNS/Paul Haring)

In a July 2018 statement to the Boston Globe, O'Malley says he had never personally received the letter, which he says was handled "at the staff level." In an August 2018 interview with Catholic News Service, Ramsey says he wrote to O'Malley because of the cardinal's position as the head of the Pontifical Commission for the Protection of Minors.

Richard Sipe, a clergy abuse survivor advocate and psychotherapist, writes to San Diego Bishop Robert McElroy. Without providing evidence, Sipe lists about a dozen priests and bishops, including McCarrick, that he says had abused children.

In an Aug. 17, 2018 statement to NCR, McElroy says that upon receiving Sipe's letter he had asked the psychotherapist for corroborating evidence of the claims. "The limitations on [Sipe's] willingness to share corroborating information made it impossible to know what was real and what was rumor," says McElroy. 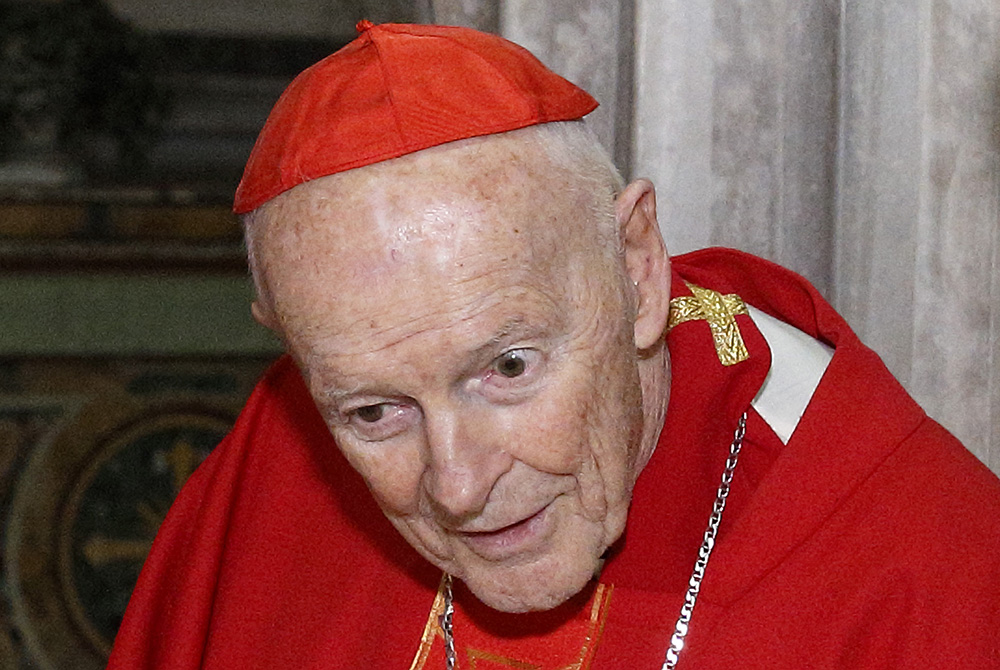 Vatican Secretary of State Cardinal Pietro Parolin delegates New York Cardinal Timothy Dolan to investigate the matter further, and instructs McCarrick to suspend his ministry as a priest while the inquiry is under way.

Newark Cardinal Joseph Tobin also reveals that McCarrick had previously been accused of sexual misconduct with adults in Newark and Metuchen, and that two of those allegations resulted in settlements.

McCarrick renounces his position in the College of Cardinals. He is the first U.S. prelate ever to do so, and the first global prelate since French theologian Fr. Louis Billot left the college over a political disagreement with Pope Pius XI in 1927. The Vatican says Francis received the resignation request, accepted it, and ordered McCarrick to a life of prayer and penance.

Pope Francis orders a "thorough study of the entire documentation" present in the Vatican's archives regarding McCarrick's career.

Pope Francis confirms the removal of McCarrick from the priesthood, following the Congregation for the Doctrine of the Faith's determination that the former hierarch had been guilty of "solicitation in the sacrament of confession and sins against the Sixth Commandment with minors and with adults, with the aggravating factor of the abuse of power."