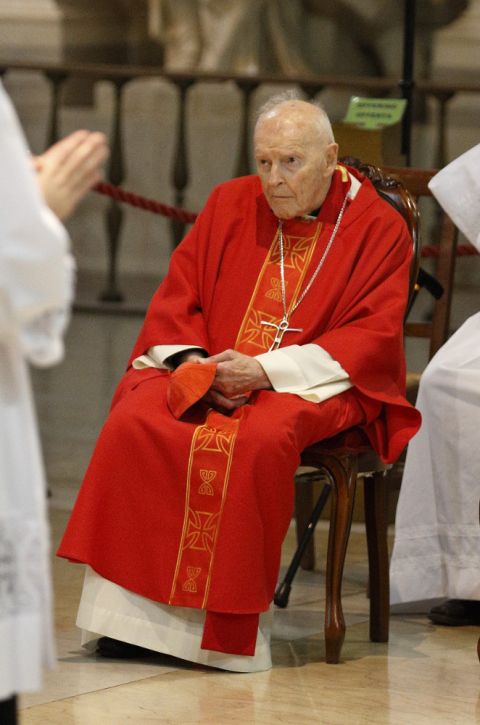 Then-Cardinal Theodore McCarrick attends a Mass in Rome April 11, 2018. The retired archbishop of Washington faces a canonical trial on allegations he sexually abused a minor and seminarians some years ago. Pope Francis accepted his resignation from the College of Cardinals July 28. (CNS/Paul Haring)

Washington — What became known following a New York Times investigation into two seminarians who said they had been abused by Archbishop Theodore McCarrick is that settlements were reached with each man in the mid-2000s.

What was less clear was the depth of involvement of each bishop, all of them from New Jersey, in the settlements, and what they did with that knowledge. All of the bishops involved are now retired.

The Archdiocese of Newark, New Jersey, contributed to an $80,000 settlement payment to Robert Ciolek, who was ordained a priest after the abuse began, but eventually left the priesthood to marry.

Jim Goodness, communications director for the Newark Archdiocese, said Archbishop John Myers, who then headed the archdiocese, was aware of the settlement. Asked by Catholic News Service if Myers authorized the payment, Goodness replied affirmatively, saying, "He's the bishop."

Goodness said Myers knew that McCarrick was the subject of the complaint. "That information was communicated to the appropriate people. I'll leave it at that," he added.

Asked if such communication extended outside the archdiocese, Goodness responded, "Mm-hmm."

McCarrick served as archbishop of Newark from 1986 to early 2001, and was succeeded by Myers.

Erin Friedlander, communications director for the Diocese of Metuchen, New Jersey — where McCarrick served from 1981 to 1986 as its founding bishop before being appointed to Newark — said the diocese "received the first complaint against McCarrick in 2004, just short of his retirement when he already was a cardinal in Washington."

After the initial complaint, "two others followed. All were decades old," Friedlander told Catholic News Service in an email. "Under the direction of then-Bishop Paul G. Bootkoski, at the time each claim was received, each was reported to law enforcement in multiple counties in the different states where the reported offenses took place."

Friedlander said, "Likewise, after the two settlements were reached, they were reported to the Holy See's representative in the United States. The settlements were made by those who were named in the claims, the Archdiocese of Newark, as well as Diocese of Trenton and the Diocese of Metuchen.

The Metuchen Diocese also made a separate $100,000 settlement in 2006 with a former priest who said he had been abused by McCarrick and others. This priest submitted the first known written complaint about McCarrick, and was later barred from ministry after having admitted in his complaint to sexual misconduct of his own.

"Archbishop McCarrick was aware of the settlements," Friedlander said.

The communications directors in Newark and Metuchen declined to make Myers and Bootkoski available for interviews with CNS.

Rayanne Bennett, communications director for the Diocese of Trenton, New Jersey, said the diocese's settlement with Ciolek did not involve any abuse allegations against McCarrick. "Our part in the settlement had nothing to do with the alleged actions of then-Cardinal McCarrick," Bennett said in a separate email to CNS.

Rather, "the Diocese of Trenton was party to the global settlement involving Rob Ciolek because he was abused as a teenager in the late Seventies while attending a Catholic high school in what was once our jurisdiction." When the Metuchen Diocese was created in 1981, some of its territory was taken from the Diocese of Trenton.

Bishop John Smith headed the Trenton Diocese from 1997 until his retirement in 2010. He was unavailable for an interview. He currently resides in a nursing home and is in declining health.