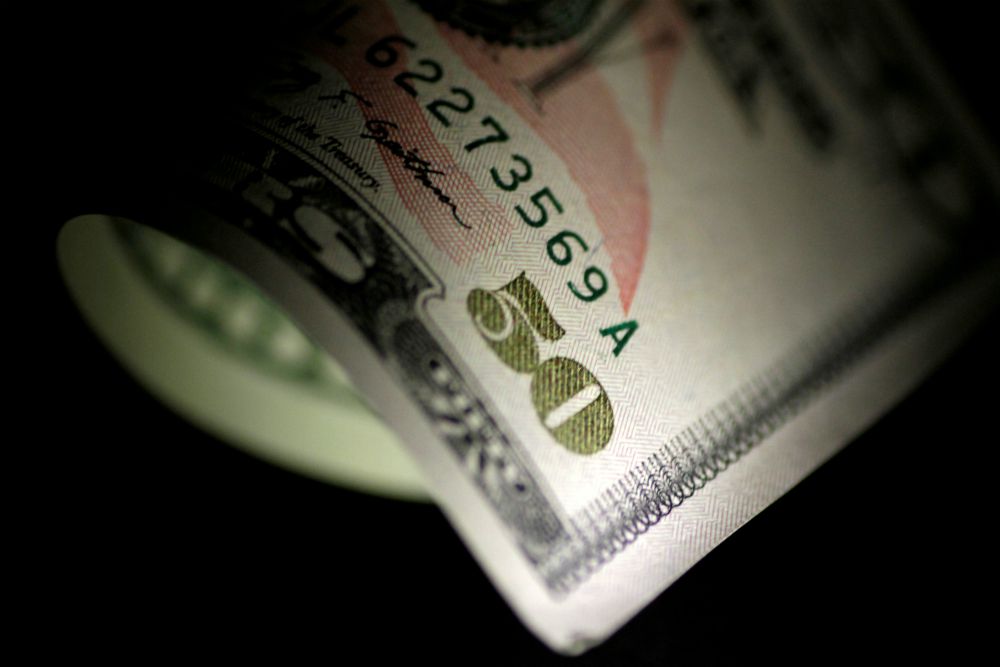 A $50 bill is seen in this photo illustration. How the church's money is spent and accounted for was a theme of the Voice of the Faithful conference. (CNS/Reuters/Thomas White)

While held amidst crisis, the date for the Voice of the Faithful conference here Oct. 6 couldn't have been better.

"Who knew how timely this would be?" Mary Pat Fox, the group's president, said in welcoming some 300 participants. Voice of the Faithful, founded in 2002 in the wake of the Boston Archdiocese sex abuse scandal disclosures, is dedicated to reforming the church's response to that issue as well as to finances.

"We have found ourselves in another Earth-shattering moment," said Fox, noting the onslaught of news about sex abuse and cover-ups revealed this year in Chile, via the Pennsylvania grand jury report, and accusations lodged against former Cardinal Theodore McCarrick.

"Our trust is broken. We have been betrayed," she said.

The day-long line-up of conference speakers emphasized that point. Speakers noted that change will not come easily. One argued that change likely won't come via church structures.

Marie Collins, an Irish survivor of clergy sex abuse who in 2017 resigned her appointment to the Pontifical Commission for the Protection of Minors, said that the group, put together with high hopes three years ago, was stymied via Vatican curial intransigence.

Her focus on the need for accountability developed from her own experience when, as a child, she was assaulted by a priest while she was a hospital patient. That priest went on to continue abusing girls for 30 years until church authorities took him out of ministry.

The Vatican commission was met with hostility and foot-dragging by Vatican officials, particularly the Congregation for the Doctrine of the Faith, Collins said. The commission wanted to implement reforms but was unsuccessful in moving church power structures and was stifled by the bureaucracy, according to Collins.

"We are still looking for things to be done right, and it's still not being done," Collins said.

Among their objectives, Collins said, commission members wanted to hold regional meetings to address clergy sex abuse around the world; create a tribunal to judge bishops who failed to protect children; sponsor a World Day of Prayer in Rome for victims of clergy sex abuse; distribute best practices to the universal church to protect children; and make a commitment to respond to all correspondence sent to Rome from sex abuse survivors.

None of the commission's proposals were enacted, Collins said, because Vatican officials stood in the way, refusing to budget funds for the group and making sure that the content of its meetings were not formally recorded. The excuses offered for such actions, she said, were "ludicrous." Pope Francis, she said, is either complicit in the foot dragging or is getting bad advice. The pope never attended any of the group's meetings.

During his trip to Ireland in August, the pope said in a private meeting attended by Collins that the commission was not honest in its work and that it was only now, with new membership, working for the good of the church.

Collins was peeved by the papal response, which implied that its problems were due to members like herself.

"It was clericalism, pure and simple," she said, as the Congregation for the Doctrine of the Faith feared the emergence of an independent body that could review its work. She said the pope is getting the same kind of bad advice that led him to first dismiss the charges against bishops and priests in Chile as calumny, a statement he later recanted.

"I think he is sincere, but he's being ineffective," she said of Francis' role.

She challenged Boston Cardinal Sean O'Malley, president of the commission, to respond to the upheaval in the life of the body.

"I hope he will explain what is going on. The power of the commission to bring real change is lost," she said, noting that the current group is now focused exclusively on education, and not on reforming the church's response to sex abuse.

This is in a time when the public outcry is now international, no longer confined to the United States and Ireland, she said, as official reports point to thousands of cases in Chile, Germany, the Netherlands, while accounts emerge in the growing church of Asia and Africa.

Collins said there are troubling statements coming from Vatican officials, including Francis, on whether the church in all countries should be subject to greater accountability on sex abuse. She said that there is a reluctance to confront what are described as "cultural differences" in the church.

"All children should be cherished equally. Where they live should not decide," she said. In Africa and Asia, "priests are on the pedestal they used to be here. They are not always as they look." 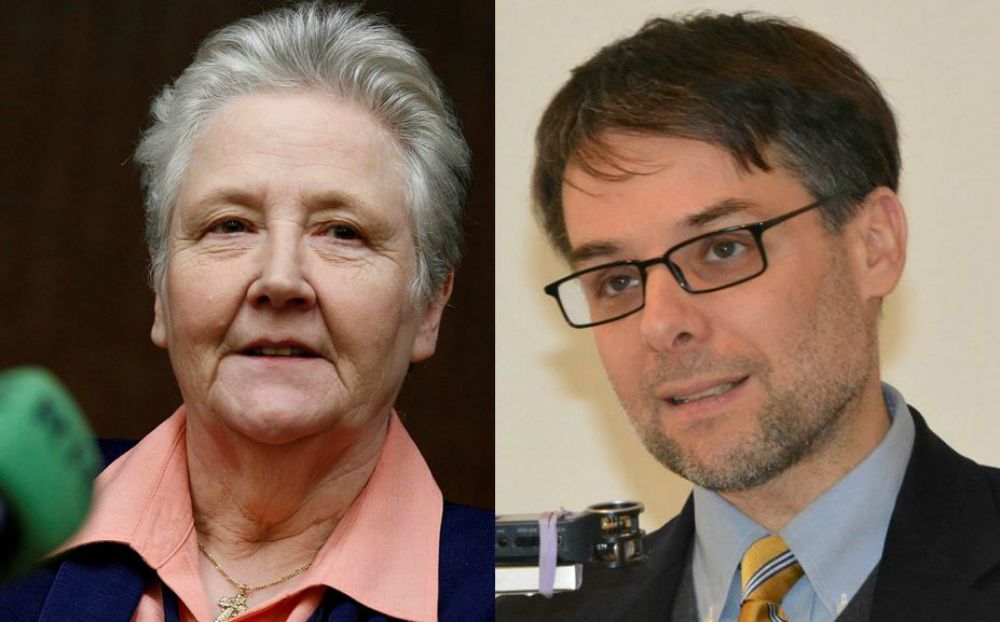 Collins said she is pessimistic in the ability of church officials to deal with the crisis but finds hope in the increasing role of governments.

She said the McCarrick case is not unique. The former cardinal, dismissed in June from public ministry by Francis, was accused of abusing a minor as well as systematically abusing seminarians while he was archbishop of Newark, New Jersey. She said that even when bishops are removed, the public announcement around such cases is often couched in vague and misleading language. Accountability is still missing, she said.

When bishops are removed for failure to respond adequately to sex abuse issues, that should be made clear, she said. Retirement for health or other reasons in such cases should not be offered as explanations.

Massimo Faggioli, a professor of theology at Villanova University, told the Voice of the Faithful conference that there is a vacuum of authority in the church created by the crisis, which he called the most serious the church has faced in the 500 years since the Reformation. That vacuum is being filled, he said, by groups, such as the Napa Institute, powered by corporate money.

There is no one Catholic laity, he said, noting that what was once perceived as a clerical versus lay difference over roles now is overlapping, with many conservative bishops aligning themselves with lay groups who want a return to a pre-Vatican II kind of church.

"Wearing a collar or being married say almost nothing about your Catholicism," he said.

He urged Voice of the Faithful to reclaim spaces that are available for lay involvement. He suggested that the group hold off on lobbying for certain concerns, such as ordaining women, where there is widespread division. Bishops involved in cover-ups and in abuse should resign, he said, but not all bishops.

Faggioli urged participants to petition their local bishops to create synod gatherings, in the model promoted by Francis, in which serious dialogue is encouraged.

Parishioners should continue their donations, he said, because new groups that are emerging with an agenda to bring the church back to a pre-Vatican II outlook have "deep pockets and an unlimited checkbook" and are willing to use it.

How the church's money is spent and accounted for was another theme of the conference, presented through the release of a report on transparency of diocesan finances compiled by a Voice of the Faithful committee.

The group put out a similar report last year, and its 2018 report will be presented to the bishops this week.

The committee report said the issues of sex abuse and financial transparency are linked.

"It is impossible to carry out a widespread cover-up of criminal acts without access to large amounts of untraceable money," the report states. Dioceses were graded on questions related to the existence of audits, their public availability, and whether or not dioceses have implemented procedures to secure Sunday collections.

Voice of the Faithful's Margaret Roylance, who presented the findings, said that 39 percent of dioceses in the U.S. do not post audited financial reports on their websites. A quarter of all dicoeses, including the New York Archdiocese, do not provide an audited report in any form.