Child sexual abuse survivor and victims' advocate Marek Lisinski is leading a march Oct. 7 in Warsaw to protest pedophilia in Poland's Catholic Church. Lisinski, 50, is president of Don't Be Afraid Foundation, an organization that counsels and operates a hotline for survivors of sexual abuse.

In the spring of 1981, when he was a 13-year-old altar boy, Lisinski's life took a tragic turn. A Polish priest befriended him and exploited his troubled young life, said Lisinski in a telephone interview. Lisinski's father had abandoned his family three years earlier, leaving his mother and grandmother to raise him in poverty.

Memories of his six-month ordeal still torment him.

Lisinski has fought a long battle with alcoholism, and has managed to function only with the help of therapy.

The Oct. 7 protest will demand the establishment of a government commission to evaluate the extent of pedophilia in the church and to aggressively prosecute sex offenders. No church or government statistics on pedophilia in Poland are available, but newspaper accounts and court data suggest there is a significant problem.

Some believe the Polish church is engaged in a systematic cover-up.

"We want to start a huge national discussion about this subject because we know the priests and church covers up many cases of pedophilia," said Joanna Scheuring-Wielgus, an independent member of the Polish Sejm, or parliament, in a telephone interview. She said that Don't Be Afraid Foundation is making public a map of Poland with the initials of 300 priests accused of child sexual abuse, as well as their locations throughout the country.

Protesters are demanding that the government protect children from priests whose bishops transfer to different dioceses to escape detection. In Lisinski's case, for example, the offending priest served a three-year suspension in a monastery and then resumed his priestly duties.

Some of the most egregious cases are made public. In January 2017, Polish newspaper Gazeta Wyborcza reported on the kidnapping and rape of 13-year-old Kasia. The accused priest, Father Roman, today continues to offer masses in Puszczykowo, a small town in southwest Poland. He corresponds with children on Facebook, according to Gazeta Wyborcza. Kasia, now 23, told the newspaper that after 10 years, she still cannot fall asleep with the lights off, and the nightmares are coming back. 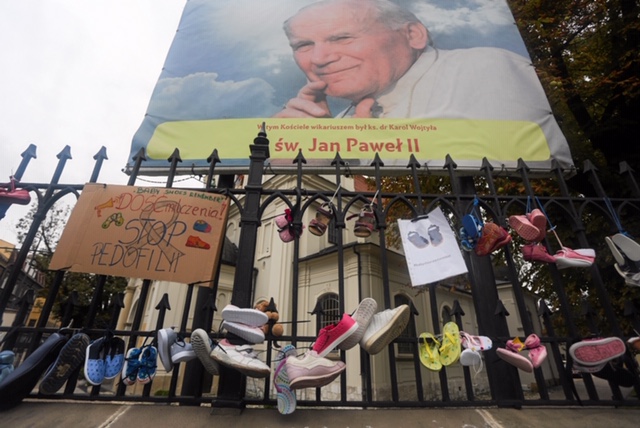 Childrens' shoes are seen Aug. 26 on the fence of the Church of Saint Florian in Krakow, Poland, for victims of pedophilia in that diocese. (Jakub Porzycki/Agenja Gazeta)

During the Oct. 7 march, participants plan to place children's shoes on the gates of three churches they pass en route to the church's national headquarters in downtown Warsaw. Children's shoes are the symbol of the Don't Be Afraid Foundation.

Growing support from Polish women, many of whom regularly demonstrate against the nation's highly restrictive abortion laws, has strengthened the organization's clout.

"More and more people have become enraged at the arrogance of the church, and we are fed up with its behavior," said Marta Lempart, a leader in the women's movement in Poland and a co-organizer of the march. "We can no longer be silenced."

The government is not likely to prosecute priests accused of sexual abuse because of a cozy church-state relationship, said Maria Bninska*, a former employee of the Voice of America, an international radio broadcast, during a telephone interview. The church provides a loyal voting base for the far-right ruling Law and Justice Party. Bninska pointed out that the pro-church ruling party appoints the government's prosecution officers, or district attorneys.

"I don't think the church would use its connection with the government to sidetrack prosecution of priests who are guilty," said Fr. Wieslaw Dawidowski, provincial superior of the Augustinian Order in Poland and vice-president of the National Conference of the Major Superiors of the Religious Orders in Poland. "But anything is possible," he added.

Dawidowski claims he does not have sexually abusive priests in his province, but knows bishops who do have them.

"How does one heal the wounds?" he asked in a telephone interview.

"Simple prayer for repentance is not enough, neither financial compensation. We need something more," he wrote later in an email. "First, we must meet victims as persons and to understand them, beg for forgiveness and ask them what kind of healing process can be implemented. Second, we ought to transform entirely the model of priesthood from a prestige model to humble servant of the society model. Finally, we must address the issues of sexual integrity from the very first days of formation of our clergy."

According to Dawidowski, if priests are guilty of sexual abuse, regardless of the number, it is truly shocking, and if the number is 300 priests, as claimed by Don't Be Afraid Foundation, then this requires a deeper examination of conscience by the church.

At a recent meeting of the Polish Episcopate Conference, Archbishop Wojciech Polak announced that a document on clergy abuse of minors should be available by the end of November.

Critics of the church note that priests convicted of pedophilia are not on the government's list of sexual offenders. Joanna Mucha, a member of the Polish Sejm from the opposition Civic Platform Party, asked the government why the priests were not on the list and was told the crimes the priests committed were not considered "brutal and violent," which is the criterion for listing sexual offenders.

"How brutal do you have to be to get on that list?" Mucha asked. "That excuse is totally unacceptable."

For Lisinski, still traumatized by the attacks from 37 years ago, the experience was indeed brutal and violent. He compared childhood to a clean crystal, polished and glistening.

"That crystal was broken by the abusive priest," he said. "And no matter how hard you try, it can never be restored."

*An earlier version of this story misspelled Bninska's last name.