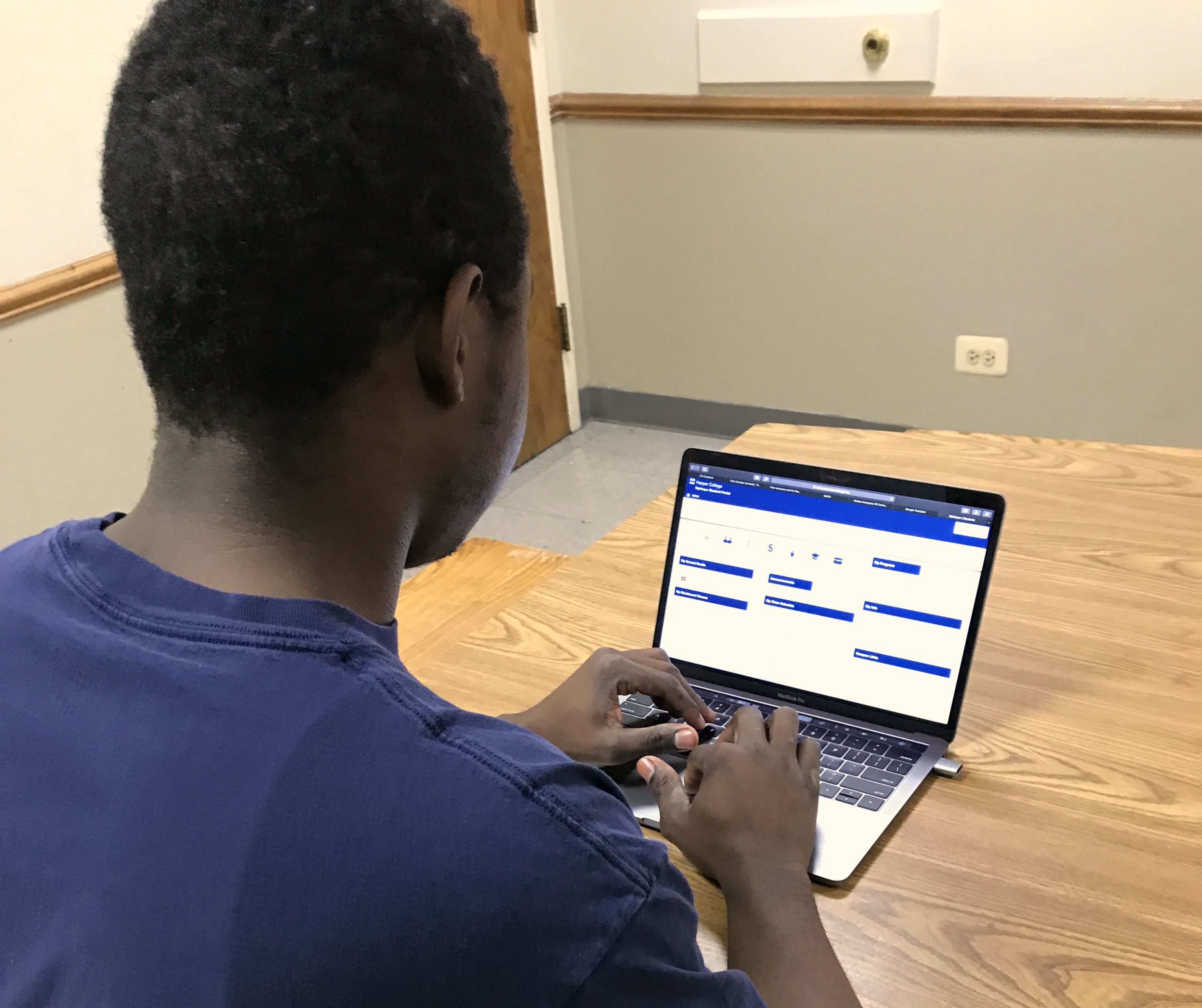 When Ahmad found out he was leaving home, he was thrilled. Then his parents told him they wouldn't be coming with him.

Instead, 17-year-old Ahmad left his country in Africa alone to make a harrowing monthslong journey through 10 countries before finally arriving in the United States.

Now 20 years old, Ahmad, who asked NCR not to reveal his real name or country of origin in order to avoid putting his family in danger, has found a home at Viator House of Hospitality, a shelter for young male asylum-seekers located in a suburb of Chicago and run by members of the Viatorians religious order.

The purpose of the house is to take in teens who arrived in the U.S. as unaccompanied minors but have now reached the age where they either need to move in with a sponsor or be transferred to adult detention.

Since it opened in January 2017, Viator House has housed over 40 young men from at least 15 countries and three continents; the house's capacity is a little over 20 at a time. Most residents are Christian or Muslim, though the house has also sheltered Sikh and Hindu men. (A coalition of Catholic sisters opened a similar program for young women, Bethany House, in October 2017.)

Former residents have either moved in with family members around the U.S. or are living independently in the area. They are always welcome to return to Viator House for meals, fellowship or support, said Viatorian Br. Michael Gosch, who founded and co-directs the house along with Viatorian Fr. Corey Brost.

Gosch called the Chicago-area shelters that care for detained children "excellent," but the youth who turn 18 without an alternative placement are transferred to much less pleasant conditions in county jails. He also realized, while working for the Interfaith Committee for Detained Immigrants, that 18-year-olds released to the organization's shelters needed extra support compared to older adults and could benefit from a separate program.

Jeanie Sullivan, who has volunteered with Viator House as a tutor, mentor and house assistant since it opened, even taught Ahmad how to drive. She has three sons, and while she'd hoped to be done with driving lessons, "I just keep thinking, if my son was in another country, I'd want someone else to do for him anything that they could."

Residents are also encouraged to continue their schooling. While some with little previous education attend a small school Viator House started in conjunction with Roosevelt University, three graduated high school last May and two recently completed their first semester of college.

"They're 18 to 20 years old, they have been through hell, they are waiting in limbo, not knowing if this country is going to send them back to hell, and in the midst of it they get up, they go to school, they go to work, they joke, they laugh, they teach us how to care for each other by the way they reach out to us. … We deal with young men of real character," Brost said.

Sullivan agreed, describing how much she's loved conversations with residents, which make her feel that "our world is better because these guys are in it." But conversation is also constrained, since conventional questions about past experiences, family or future hopes could uncover painful memories or unresolved anxiety for the young men.

"We're told to just kind of be in the present with them," Sullivan said. "You're getting to know them but trying to be very, very sensitive to the fact that … they wouldn't be here if they had a very happy past."

Several Viator House volunteers and staff members said the most difficult part of their work is knowing they can't eliminate residents' trauma from the past, their worries for the family they left behind or their uncertainty about the future.

"Sometimes I worry when I think wow, we are all they have … I don't want to fail these kids," Brost said, later adding that "the hardest part is not being able to solve the problems you can't solve."

Danger during journey to US

Ahmad's parents arranged for him to leave the country after soldiers attacked his mother in retaliation for his father's political involvement. Ahmad, then 16, came upon the attack when he returned home from school and tried to protect his mother. The soldiers beat him and broke his leg.

Though Ahmad is grateful for Viator House's support and happy about the progress he's made on his educational goals — he recently started college and hopes to attend medical school — he didn't hesitate when asked if he has any other dreams: "Yeah, to be able to see my parents in the future."

According to Gosch, another Viator House resident had been recruited by a gang in Central America along with a friend, but both had resisted joining. After the gang murdered his friend, the teen decided he had no choice but to join. Gang members told him he was still welcome — if he killed one of his parents to prove his loyalty. He fled the country instead.

Residents have also experienced danger and trauma on the journey to the United States . Gosch said many asylum-seekers from Asia and Africa take the same route as Ahmad, flying to Brazil and then passing through Peru, Ecuador, Colombia, Panama, Costa Rica, Nicaragua, Honduras, Guatemala and Mexico, before reaching the U.S. months later.

Perhaps the most terrifying part of the trip is a journey by sea from the coast of Colombia, followed by a long walk through the Darién Gap, an undeveloped, mountainous rainforest on the Colombia-Panama border.

"It was really, really, really scary," Ahmad said of that portion of his journey. He described walking for two weeks on slick mountain paths, hearing wild animals screaming at night, running out of food after three days, and having to choose between drinking unsafe river water or nothing at all. One of his companions fell "all the way down" a mountain, apparently to his death.

Upon finally reaching the U.S. border, Ahmad turned himself in to immigration authorities and was sent to a children's detention center in the Chicago area. The Young Center for Immigrant Children's Rights connected him with Viator House, and he became the first program member in December 2016, living in a rectory until the house officially opened.

Like Ahmad, many Viator House residents were referred by the Young Center or the National Immigrant Justice Center. Most were detained in the Chicago area, although as word of the program has spread they've received referrals from Florida, New York, Pennsylvania and Colorado.

Four residents had been sent to adult detention at age 17 because documents proving their age couldn't be authenticated, then released after winning their asylum cases, which are expedited in detention. All other residents are still waiting for asylum decisions, and some are also waiting for work authorization, Gosch said.

Many incurred debts to travel to the U.S., and worry about repaying them "weighs heavily on them." Working without authorization can imperil their asylum cases, which some already worry they might lose.

Staff and residents alike have been concerned by the news that it's now more difficult to get asylum based on gang violence — which affects many Central Americans — or that higher numbers of Somalians are being deported for presumed connections to the al-Shabab terrorist group.

Gosch was also saddened when another young man, witnessing a joyful meeting when family members arrived to collect another resident, asked a case manager when someone would come for him.

"The sad thing is there's no one who can come for him," Gosch said. Residents "say to us that we have become their family. We don't know how long they'll need us, but we're in it for the long haul. We're here until they can have the resources that they need to begin to live independent lives."

After experimenting with a more structured model, the house's leadership dropped mandatory dinners, counseling and peace circles — which residents said reminded them of detention — and settled on a model that keeps rules to a minimum and allows residents to take responsibility for community formation.

"We have 20 young men who've been through a lot of trauma from 10 countries and many cultures, and we rarely, rarely have dustups. … I really think these guys go out of their way to be patient with each other, and then you also see them developing friendships across national or religious boundaries," Brost said.

As Sullivan, the volunteer, spends time in the house, she's often impressed by the positive atmosphere, especially considering the "major unhappiness" in residents' pasts. "You'll hear laughter and music and people horsing around or playing soccer and just think what this house has given back to these guys," she said.

"They're like a family for me," Ahmad said of the Viator House community, and Gosch echoed the sentiment. "I never wanted children but now I've got 23 of them" or more.