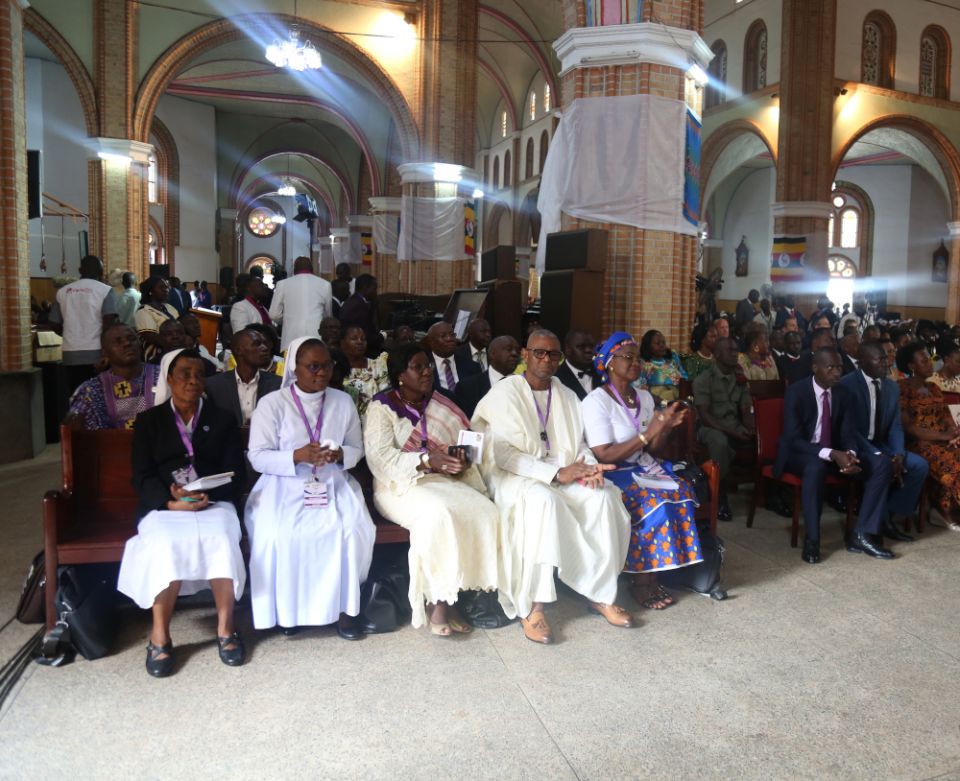 Delegates are seen in St. Mary's Cathedral in Kampala, Uganda, July 21, 2019, for the opening Mass of the week-long meeting of the Symposium of Episcopal Conferences of Africa and Madagascar (SECAM). (CNS/courtesy SECAM)

If given appropriate support, Africa's young people can be the engine to propel the continent's growth, said a participant at the 50th anniversary celebrations of the Symposium of Episcopal Conferences of Africa and Madagascar.

"How to generate economic opportunities for young people" is among the topics the 300 participants in the July 21-28 meeting in Kampala are discussing, Sean Callahan, president and CEO of Catholic Relief Services, said in a July 25 telephone interview from Uganda's capital.

The theme of the 18th plenary meeting of the symposium, known as SECAM, is "Church-Family of God in Africa, Celebrate Your Jubilee! Proclaim Jesus Christ Your Savior."

The risks facing young Africans who cross borders to seek work include being conscripted into insurgency groups such as Boko Haram in West Africa, Callahan said.

Sixty percent of Africa's population is younger than 25, according to the U.N.

The symposium bishops should give young people "space so that they may become good leaders of tomorrow," Archbishop Thomas Luke Msusa of Blantyre, Malawi, told a press briefing in Kampala.

"If we ignore the call of our young people today and continue with business as usual without recognizing them, without empowering them, it means that the SECAM of tomorrow will not be very powerful," he said.

Archbishop Msusa and Archbishop Charles Palmer-Buckle of Cape Coast, Ghana, said that the symposium bishops are seriously considering the request made by young people at the meeting for a bishop to be tasked with overseeing youth outreach at a continental level.

The symposium brings together 40 national and regional bodies of Catholic bishops in Africa. Also at the meeting are representatives of other bishops' conferences and humanitarian aid agencies from around the world.

Ebola, a highly infectious hemorrhagic fever that the World Health Organization has declared a global health emergency, and HIV and AIDS are problems that cross international borders, Callahan said.

The Kampala meeting "provides an opportunity for all of us to look at our different roles and how we can raise the visibility of issues," he said.

Cardinal Wilfrid Napier of Durban, South Africa, told CNS it is important for participants to share their experiences of how the church is dealing with HIV.

"The infection rate is so high, yet it is hardly spoken about," he said in a telephone interview, noting that almost 8 million people in South Africa, "many of them young people," are HIV positive.

Napier said he was "shocked" to see only a brief reference to the pandemic in the "instrumentum laboris" (working document) of the 2018 Synod of Bishops on young people, the faith and vocational discernment. A note on integrating HIV-positive youths into pastoral care "is all that is said about HIV and AIDS in the working document."

In many African countries, the church is the second-largest provider of care, after the government, he said.

The concerns of the church in Africa are often overlooked by the global church and the Kampala meeting can help to address the issue, Napier said.

"Europe is looking to Africa" to help solve its shortage of priests, he said, noting that "many African countries are in a strong position to send missionaries abroad."

In the 50 years since the symposium was established, "the people of Africa have experienced periods of great sorrow and suffering; terrible wars, brutal dictatorships, times of civil war, religious and ethnic strife, famine and natural disasters," Cardinal Daniel DiNardo of Galveston-Houston, president of the U.S. Conference of Catholic Bishops, said in a message read to participants July 21.

"Throughout these difficult times, the church in Africa has stood firm to proclaim the Gospel, feed the hungry, clothe the naked, shelter the homeless, defend the persecuted, thus bringing a credible witness, sometimes at great risk, to her efforts to promote justice, peace, the rule of law, and democratic governance," he said.

Capacity sharing is crucial, Callahan said, noting that the symposium meeting "is a wonderful opportunity for cooperation" among regions.

In its response to refugees, mostly from war-torn South Sudan, Uganda "serves as a good example of the church working together with government and local communities for greater impact," he said.

Unlike many other governments and local populations, Uganda "is welcoming to refugees," he said.