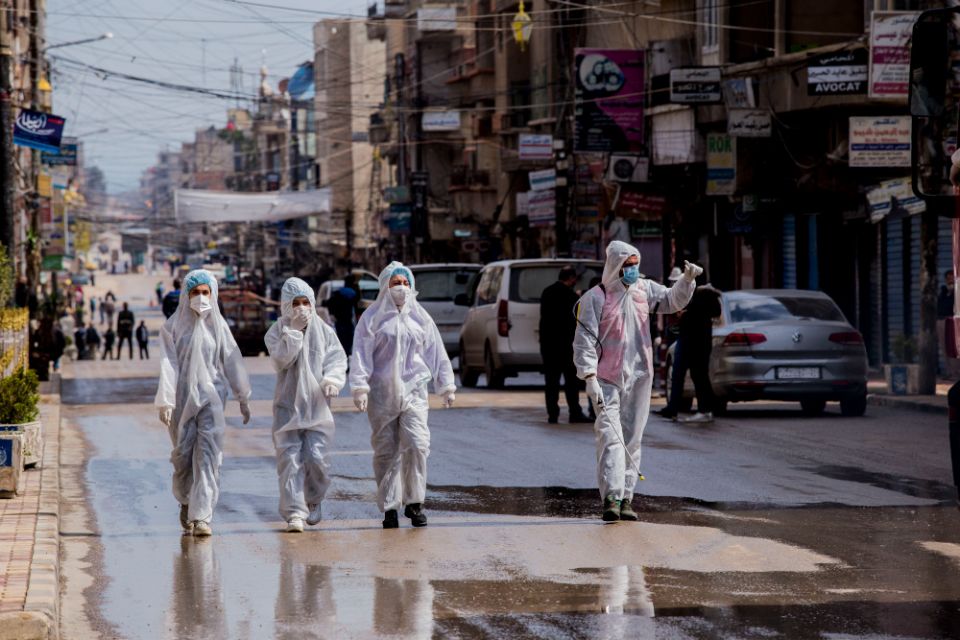 Medical workers oversee the disinfection of the streets to prevent the spread of coronavirus in Qamishli, Syria, March 24, 2020. (AP/Baderkhan Ahmad)

Cairo — An international aid group said March 25 that closures aimed at containing the coronavirus pandemic are preventing it from reaching 300,000 people in conflict zones across the Middle East, as the coronavirus arrived in war-torn Libya and three more cases were detected in Syria.

The Norwegian Refugee Council said it was unable to reach people in Syria, Yemen and the Gaza Strip, where authorities have imposed strict measures to halt the spread of the virus. All have fragile health care systems that could be overwhelmed by an outbreak, and only Yemen has yet to report any cases.

"While governments are taking tough and much-needed measures to prevent the spread of coronavirus, millions of refugees and displaced people still depend on humanitarian assistance," said Jan Egeland, head of the aid group.

In northwestern Syria, hundreds of thousands of people are crammed into unsanitary tent camps, sheltering from the government offensive on the war-torn country's last rebel stronghold. On March 25, the U.S. urged the Syrian government to halt its campaign so those displaced can access humanitarian aid. Otherwise, it warned, the coronavirus would spread "to epic proportions." On March 25, Syria's tally of cases rose to four and testing began after weeks of obstacles in the rebel-held province.

For most people, the new coronavirus causes mild or moderate symptoms that clear up in two weeks. For some, especially older adults and people with existing health problems, it can cause more severe illness. The virus is highly contagious and can be spread by those showing no symptoms.

Countries across the Middle East have imposed sweeping measures to prevent its spread, including closing their borders, cancelling flights and in some cases imposing round-the-clock curfews.

The Israeli government on March 25 approved new restrictions, including the closure of all synagogues. Authorities across the region have already shuttered major holy sites sacred to Christians, Muslims and Jews.

Many in Israel's insular ultra-Orthodox communities have defied restrictions on public gatherings, despite the pleas of rabbis and local authorities. That has led to tension with authorities and in at least one case, scuffles with police.

Twenty-nine percent of those who contracted the virus in Israel were infected in a synagogue or a yeshiva, according to an analysis by the National Information and Knowledge Center for the Fight Against the Coronavirus, which has been advising the Health Ministry.

The new restrictions in Israel will bar most people from venturing more that 100 meters (yards) from their homes. More than 2,100 Israelis have been infected, with 37 in serious condition. Five elderly Israelis with pre-existing medical conditions have died.

The Palestinian Authority, which governs parts of the Israeli-occupied West Bank, has ordered a full lockdown and halted travel between cities, towns and villages. Sixty cases have been reported in the West Bank and another two in Gaza. 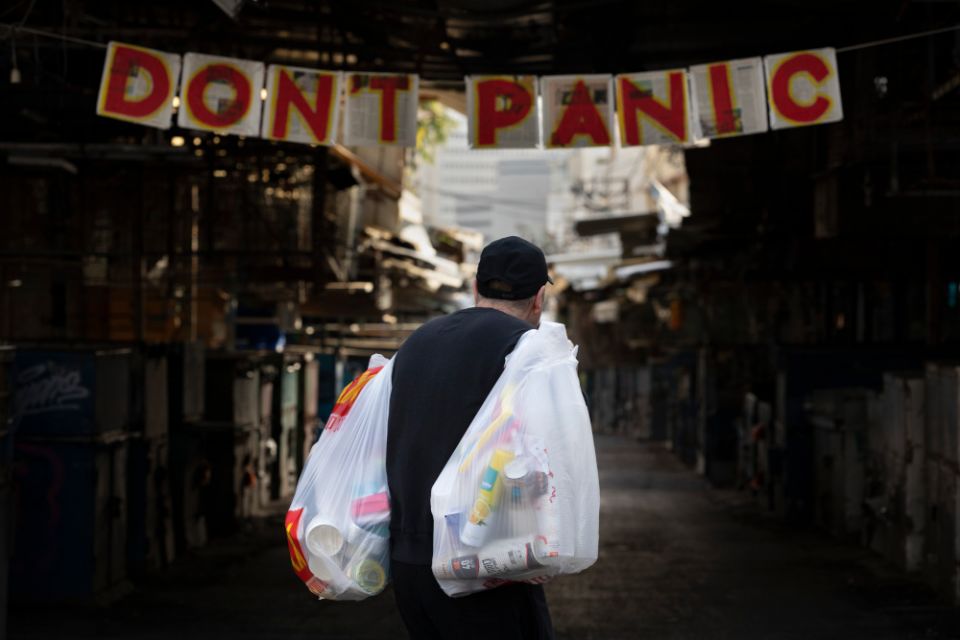 A man carries his shopping as he walks by a "don't panic" sign hanging at the entrance of a food market that is closed in order to reduce the spread of the coronavirus, in Tel Aviv, Israel, March 23, 2020. In Israel daily life has largely shut down with coronavirus cases multiplying greatly over the past week. (AP/Oded Balilty)

Late March 24, the Palestinian Authority ordered all Palestinian workers to return to the West Bank from Israel, which had allowed around 65,000 to stay and work during the crisis, mostly in construction, agriculture and manufacturing. Wages in Israel are much higher than in the Palestinian territories, where decades of Israeli military rule has hindered economic development.

In Libya, officials say a 73-year-old man who entered from neighboring Tunisia on March 5 tested positive. He had recently traveled to Saudi Arabia, according to Libya's National Center for Disease Control, and is being treated at a Tripoli hospital.

Libya has been mired in chaos since the 2011 uprising that overthrew and killed longtime dictator Moammar Gadhafi. It is governed by rival authorities based in Tripoli and eastern Libya whose forces have been battling over the capital for nearly a year.

On March 24, Tripoli's suburbs came under heavy fire even as the United Nations appealed for a truce so authorities could focus on the pandemic.

In Egypt, a nationwide curfew from 7 p.m. until 6 a.m. would go into effect March 25. Egypt has confirmed 442 cases and 22 fatalities, including two senior military officers who were involved in efforts to disinfect public places.

Iran is battling the worst outbreak in the region, with over 27,000 confirmed cases and a death toll of at least 2,077. Authorities have advised people to stay at home but have not imposed the kinds of lockdowns seen elsewhere. State television aired footage of people thronging the streets on March 23 night, ignoring social-distancing warnings. President Hassan Rouhani he was left with "no other choice" than to impose new restrictions on public places such as parks.

Afghanistan imposed a lockdown on its western Herat province, which borders Iran and where the largest number of cases has been detected. Afghan authorities have reported 76 cases and two deaths. The NATO-led coalition in Afghanistan has reported four cases among soldiers who recently arrived in Kabul.

Afghanistan has been at war for decades, and more than half of its population lives in poverty.

Saudi Arabia, meanwhile, expanded its curfew hours in the cities of Mecca and Medina, home to Islam's holiest sites, as well as the capital, Riyadh. Residents now must remain inside their homes from 3 p.m. to 6 a.m. The kingdom, which has reported 900 cases, also banned travel between three governorates.

Abu Dhabi's Etihad carrier, one of the biggest in the Middle East, said it has had to cut salaries by 25-50% due to the grounding of its passenger flights. The United Arab Emirates, which is home to the world's busiest airport, in Dubai, took the unprecedented decision this week to halt all passenger flights, including transit flights.

As community transmission appears to take off in Pakistan, which has confirmed 1,000 cases and seven deaths, the country halted all domestic passenger flights beginning March 26.