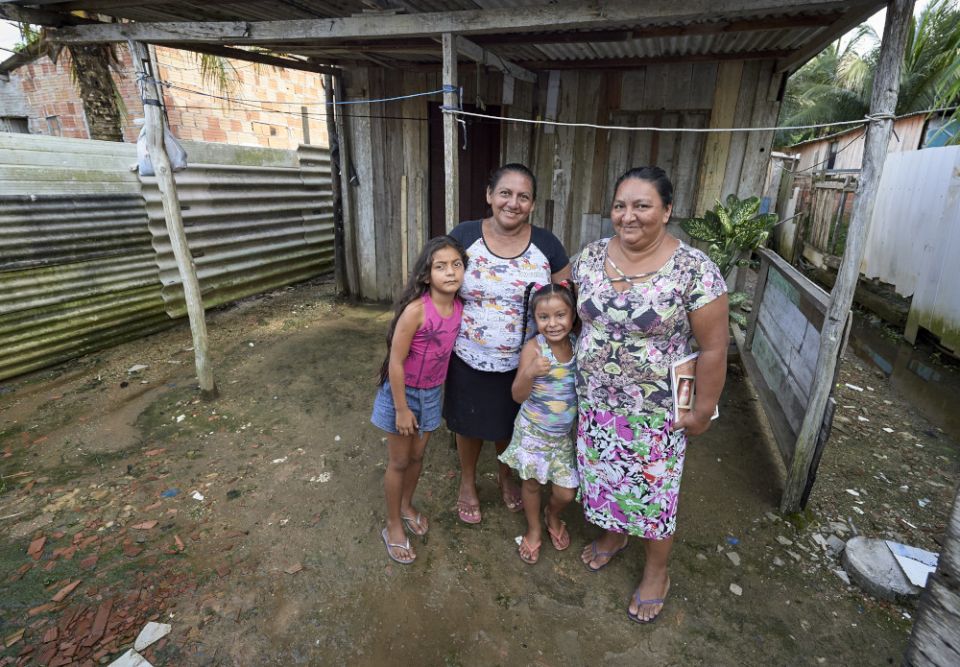 Members of an indigenous family pose in front of their house in the"Indigenous Nations" neighborhood in Manaus, Brazil. The neighborhood is home to members of more than a dozen indigenous groups, many of whose members have migrated to the city in recent years from their homes in the Amazon forest. (CNS/Paul Jeffrey)

Manaus, Brazil — Three decades ago, when Pedro Mura was 12, ranchers seeking to seize his community's land threatened his family with death. The family, Mura Indians from a remote village near the border between Brazil and Colombia, fled downriver in canoes, a monthlong ordeal that led them to a riverbank here.

Since then, Manaus has swelled to more than 2 million people, and Mura, now 46, has become the leader of a 9-year-old urban neighborhood where migrants from more than a dozen indigenous peoples have settled.

The neighborhood, which they call "Indigenous Nations," lacks basic services such as potable water and trash collection. As Mura led visitors on a tour of the neighborhood, he stepped carefully over rivulets of sewage on one unpaved street.

Despite the shortcomings, he and other residents are proud of what they have built – a multiethnic neighborhood where people take pride in their heritage, in a city that often ignores or is hostile to its indigenous residents.

"The popular image is of Indians in their communities," wearing native dress and practicing their traditional customs, said Marcivana Satere Mawe, who works with the social ministry office of Caritas in the Archdiocese of Manaus.

In cities, she says, "the big problem is that indigenous people are invisible."

When Pope Francis addressed nearly 3,000 Amazonian indigenous people during his visit to Peru in January 2018, he spoke about most of the major issues affecting their territories but did not mention urban Indians, though many of his listeners were from parishes in cities or towns.

That omission was corrected in the working document for the Synod of Bishops for the Amazon, which the pope announced in Peru and which will be held at the Vatican in October.

The residents of Amazonian cities, which have sprawled over areas that once were forest, must help care for the remaining forest and respect indigenous people, the document says.

But "many inhabitants of Amazonian cities consider indigenous people an obstacle to their progress and turn their backs on the forest," the document says.

There is some irony in the situation. The places where Amazonian cities were built were once indigenous territories. Iquitos, the largest city in the Peruvian Amazon, is named for a tribe that once dwelt in that area.

But in most countries, the legislation that supports indigenous people's rights, particularly territorial rights, applies only to their communities of origin.

Once they disperse in cities, their rights as indigenous people fade, and they live like other low-income migrants from the countryside. That means they generally settle around the outer edge of the city, in areas lacking public services, facing strong pressure to abandon their traditions and language in order to blend in.

"In urban centers, government bodies often avoid their responsibility to guarantee (indigenous people's) rights, denying them their identity and condemning them to invisibility," according to the synod working document.

"The law wasn't designed for Indians in the city," Mura said. "We suffer here from garbage, a lack of forest and environmental damage."

Their fight is not just for better living conditions, but also for recognition of their rights and for respect, he said. "We would like this to be a model community, but we don't get support from organizations or government agencies."

Residents of the Indigenous Nations neighborhood face prejudice, he said, especially from city dwellers who say the indigenous families have no right to be there – that they belong in the forest and should go back to their territories.

But people migrate to cities for various reasons, Mura said. Some are young people seeking jobs or an education. Some have traveled to the city to seek medical care and decided not to return home.

The Indigenous Nations neighborhood is trying to change the stereotypes by lobbying for recognition as an indigenous community. The neighborhood was established in its current location in 2011, after the founding families were evicted from two other pieces of land.

Each indigenous group maintains its own communal structure, with its own leader, as well as an overall neighborhood leadership committee that Mura heads. Families from the same group generally live near one another, maintaining their rituals and other traditions together. 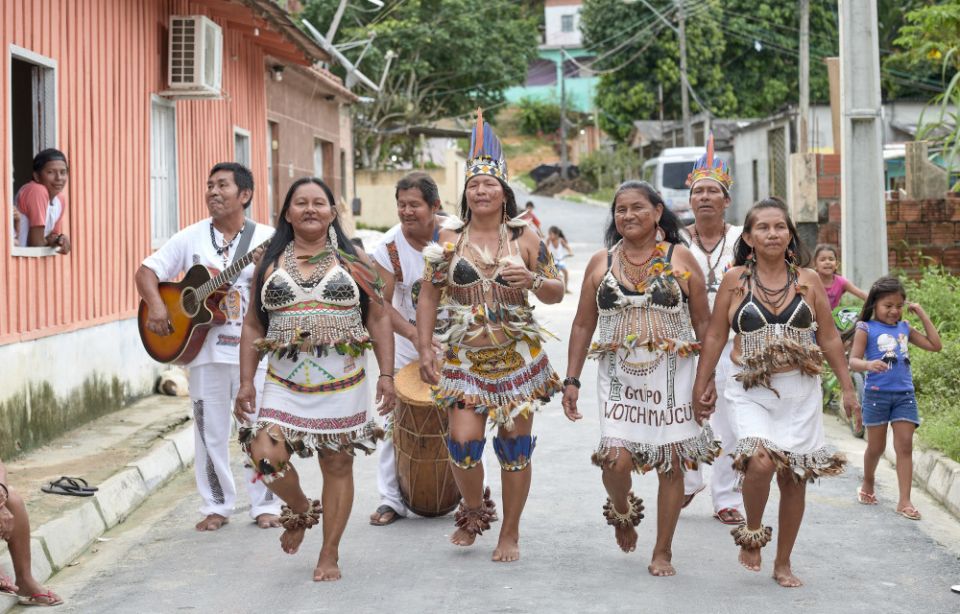 Tikuna dance in the street of their neighborhood in Manaus, Brazil. Tikuna families started moving to the city in the 1980s from their forest villages in the Alto Solimoes region of the Amazon. (CNS/Paul Jeffrey)

Other indigenous groups are also making an effort to keep their culture alive, said Satere Mawe, who also serves as finance coordinator of the Coordinating Office of Indigenous Peoples of Manaus and Environs, or COPIME, which works with the many indigenous groups in the city.

COPIME has identified members of at least 34 different indigenous groups living in more than 50 neighborhoods in Manaus.

There were just a handful of Tikuna families in the city when Aguinilson Araujo Peres arrived with his family in 1995, at age 3. Now there are around 300. They formed a community association in 2002, and Peres is now the cacique, or chief.

In the neighborhood where he lives, there are 17 Tikuna families whose houses are intermingled with those of non-indigenous families. On one corner is a building that serves as their community center, a place where their customs remain vibrant.

The walls are painted with scenes depicting the Tikuna people's world, and children begin learning traditional songs and dances by the time they are 2 or 3 years old. The activities also reinforce their command of the Tikuna language.

Although most families still speak Tikuna at home, children begin speaking Portuguese at an early age, learning it from non-indigenous playmates and at school, Peres said.

"We've worked hard with the young people on cultural identity," he said.

That includes traditions, but also the values of work and family, he said. Community leaders also address the risks that young people encounter in the city, especially alcohol and drugs, and the danger of becoming caught up in prostitution.

The Tikuna association has received support from the Caritas office in the Archdiocese of Manaus, as well as from the church's human rights office. Satere Mawe hopes the bishops participating in the synod for the Amazon will discuss how the church can continue to respond to the needs of urban Indians.

Besides criticizing government neglect of indigenous people in urban areas, the working document for the synod notes that "some parishes have not assumed their full responsibility in the multicultural world." They should respond to the needs of urban indigenous people, the document says, with "a specific, prophetic, missionary ministry."