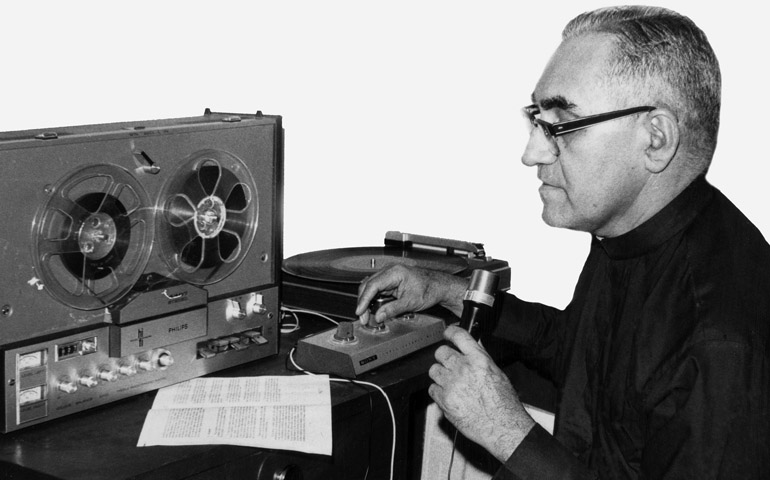 While he was first and foremost a faithful shepherd and a martyr for the faith, a fact now confirmed by the Vatican, Archbishop Oscar Romero was also the most trusted source of news in war-torn El Salvador up until the day he was assassinated on March 24, 1980.

In a country where the major media refused to report on the unbridled military violence, Romero refused to be censored. He refused to be silent -- despite getting daily death threats and having his archdiocesan radio station bombed.

Through his homilies, radio broadcasts and reports in the archdiocesan newspaper, every week Romero detailed the tortures, murders and disappearances, making sure that truth would not be the first casualty of war.

The archbishop was not only the most trusted, but frequently the sole source of news about what was happening in the country. His often hourslong homilies, broadcast every Sunday by the archdiocesan radio station YSAX, were the most popular program in the country, with nearly 75 percent of the rural population and 50 percent of the urban population listening in -- along with the U.S. Embassy.

That made the station, which also broadcast information from the homilies later in the week, a recurring target of the military, which jammed its signal and bombed its offices.

Romero's courage in reporting on the atrocities while living inside the war zone stands in sharp contrast not only to the Salvadoran media of his day, but to the U.S. media today -- from the self-aggrandizing falsehoods spouted by NBC anchor Brian Williams and FOX News commentator Bill O'Reilly, to the mainstream media's failure to pursue the Bush administration's lies about weapons of mass destruction and their refusal to use the word torture to describe torture.

Romero, a reserved and conservative churchman before being thrust into the limelight with his appointment as archbishop, never manufactured danger, and only reluctantly took on the role of denouncing violence after the murder of his close friend, Jesuit Fr. Rutilio Grande. Grande was the first of six priests to be murdered while Romero was archbishop.

In 1977, the year Romero became archbishop, to the delight of the Salvadoran military and oligarchy, all four major newspapers were "principally mouthpieces" for organizations of wealthy farmers and businessmen, according to Romero biographer Jesuit Fr. James Brockman.

In November of that year, Brockman noted, the four papers were full of stories about a prominent businessman killed during a kidnapping attempt, but not one mentioned that a delegate of the word, a lay catechist, had been found mutilated and decapitated the same week.

In contrast, Romero held himself to the journalistic ideals of truth, balance and fairness. He reported and condemned the violence on both sides in his reports and homilies.

In his last Sunday homily, on March 23, 1980, Romero told of a peasant beaten by the military, dragged from his house and decapitated. He also reported the rape of four young women by soldiers.

But he also reported a detailed account of the torture of a policeman in the cathedral by one of revolutionary groups, which rubbed bleach in his eyes and administered electric shocks. Romero went on to say that churches had been opened to give people refuge from the violence, but "are not meant to be centers for any type of political indoctrination or military training."

The archbishop called attention to "the state of siege and the misinformation that is being disseminated, both in official communication as well as in official reports in the media" about a general strike that led to the killing of dozens of people.

Romero was not political, but it may have appeared to the uninformed that he came down disproportionately on the military. That was because the army and its death squads committed 85 percent of the atrocities, as the U.N. Truth Commission later documented. It was a fact the oligarchs and their media outlets conveniently ignored when condemning Romero as a Marxist.

While Romero was careful to be balanced and fair, he did advocate on behalf of all victims of violence and injustice, whatever the source.

Romero, in effect, practiced a form of advocacy journalism that acknowledges its viewpoint, as opposed to media that claim to be objective, neutral and unbiased.

He would routinely editorialize and advocate for such things as:

And he tirelessly advocated for the poor, even though he knew the consequences. He once remarked, "Anyone committed to the poor must suffer the same fate as the poor. And in El Salvador we know the fate of the poor: to be taken away, to be tortured, to be jailed, to be found dead."

In her book Oscar Romero: Memories in Mosaic, María López Vigil quotes Salvadoran journalist Armando Contreras as saying Romero "was the highest source of information that this country had during those years, and if there's any title that fits him perfectly, it's 'the journalist of the poor.' "

The archbishop often presented events through the eyes of the poor, becoming a voice for the voiceless who had no access to the media.

Romero was arguably the top investigative reporter in the country then, or more precisely the head of a de facto investigative reporting team. He was renowned for insisting that every fact be checked and documented, regardless of its source, even if it was a priest, nun or seminarian. He would refer cases without sufficient evidence to the legal aid office that he set up to investigate and document disappearances and murders.

Timid and introverted by personality, Romero constantly struggled with his fears, but like any seasoned investigative reporter, he did not back away from confronting power, and resisted pressure from even the most commanding figures.

In early 1980, Salvadoran Defense Minister José Guillermo García approached Romero about supporting the junta that had been installed after a military coup. Romero told García to his face that he could not support a junta that would name someone as repressive as García as the minister of defense.

García, who was trained at the U.S. Army's School of the Americas, was not only the head of the military when Romero was assassinated, but also when the four U.S. churchwomen were slain Dec. 2, 1980, and on Dec. 11, 1981, when almost 1,000 civilians, mostly women and children, were massacred at El Mozote.

The administration of U.S. President Jimmy Carter also pressured Romero to support the junta and secretly tried to get the Vatican to intervene.

Romero never budged, but instead wrote Carter a letter, which he read during his Feb. 17, 1980, homily, urging Carter to stop sending aid to the junta, given the drastic level of human rights abuses by the military.

The State Department immediately notified the Vatican. Jesuit Fr. Ignacio Ellacuría, the rector of Central American University who would later be assassinated by a Salvadoran military unit trained at the School of the Americas, told Romero that the Vatican was demanding an explanation.

After Romero sent the letter to Carter, the archdiocesan radio station was destroyed by a bomb. But a makeshift transmitter enabled his Sunday homily to be broadcast March 23, 1980. It was his last.

In it, he tried a different approach to curb the bloodshed, appealing directly to rank-and-file military members, saying, "No soldier is obliged to obey an order to kill if it runs contrary to his conscience."

The next day, Romero was assassinated while saying a memorial Mass for the mother of a publisher of an independent newspaper. The order was given by a graduate of the School of the Americas, which was then training increasing numbers of Salvadoran officers.

Romero had been threatened with death many times and had already forgiven his potential assassins. He also called on the people of El Salvador not to lose faith, but to answer the call to bring about a more just society:

"If one day, they took our radio station away from us, closed the newspaper or didn't let us speak; if they killed off all of our priests and the bishop too, then each one of you would have to be a microphone for God."

A version of this story appeared in the March 13-26, 2015 print issue under the headline: Martyr and 'journalist of the poor'; as archbishop, Romero was also El Salvador's most trusted news source.