Burma: Power, politics and the church in Burma 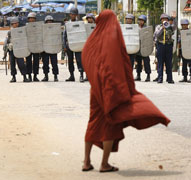 A monk stands after being halted by riot policemen and military officials while he and others attempted to enter the Shwedagon Pagoda in Yangon, Burma, Sept. 26, 2007. (Reuters)

BURMA -- As a Catholic boy growing up in 1970s Burma, Thomas saw only two paths in front of him. He was idealistic, loved his country, and hated the ruling junta. He could take up arms alongside ethnic rebels fighting the oppressive military regime that had ravaged his village so many times. Or he could join a Catholic order he saw serving the poor and educating young people.

After a period of prayerful reflection, he chose the latter and became Brother Thomas, feeling he could do more for his people through education than by pointing a gun. His choice of ministry over militancy has not, however, diluted his anger toward Burma’s ruling junta, which has held power through various incarnations since 1962. But there is another resentment as well, toward the very church he serves.

“I know Jesus said to love our enemies, but how can we love them?” Brother Thomas asked, referring to the military generals. “I can turn the other cheek, but I turn and turn and finally I just want to …” He stops abruptly, and with a clenched jaw punches the air in front of him.

Brother Thomas’s eyes grow unsettlingly intense as he recounts the times government soldiers stole his family’s livestock -- and their livelihood -- with impunity. He recounts the days soldiers came to his village, burned homes to the ground, and abducted townspeople for use as forced laborers.

The kind of theft, intimidation and forced servitude Thomas speaks of is common in Burma, and human rights abuses are shockingly prevalent in ethnic areas. (Some 30 percent of the country’s population come from tribal, not Burman, backgrounds.) The government’s use of torture, extrajudicial killings, jail without trial, and rape as a weapon of war is well documented by organizations such as the United Nations, Human Rights Watch and Amnesty International.

But as upset with the junta’s abhorrent practices as religious such as Brother Thomas are, some say they feel betrayed in a more personal way by their own church. These religious say they expect the junta to abuse and neglect its people. But they also expect their church to stand with them and against government oppression. This has often not been the case.

A recurring theme heard by this reporter during two weeks traveling through Burma was the view among Catholics that their church hierarchy enjoys an all too comfortable and nonconfrontational relationship with the junta.

In what many religious here consider an unconscionable practice, some bishops are said to host the junta’s generals for Christmas celebrations and other events. The church, these religious say, also routinely pays bribes directly to top generals in exchange for a small degree of freedom to operate and to maintain certain episcopal comforts. In a striking parallel to the way Burma’s junta itself operates -- where military officers at the top rungs live very well while enlisted soldiers often have to scrape by for their next meal -- some top church leaders live in a world of relative abundance while many lower-level clergy and religious are truly living out their vows of poverty.

Burma has no archbishop like Oscar Romero of late-1970s El Salvador to hear the cry of the poor and oppressed, to speak out for the disenfranchised even if it means facing the government’s wrath. In a long-established dictatorship like Burma, where the church is relegated to the sidelines of society, there have been admittedly fewer opportunities for someone in the mold of Romero to come to the fore. However, many Catholics thought the political upheaval of 2007 would have been the perfect moment for church leaders to speak out.

The would-be “Saffron Revolution” of 2007, led principally by Buddhist monks and crushed ruthlessly by the junta, put to rest any notion that the Catholic hierarchy might divorce itself from its accommodating relationship with the junta. During September 2007, tens of thousands of ordinary citizens and saffron-robed Buddhist monks held peaceful protests against the government. The burst of civil disobedience soon transformed into a broader movement against the illegitimacy and abuses of the regime.

It was the largest uprising since the 1988 student protest movement. (That almost-revolution led to dissident Aung San Suu Kyi’s party winning a landslide victory in the 1990 elections, after which the junta nullified the outcome and put Suu Kyi under house arrest.) Even more traumatic in 2007 was the way historically revered Buddhist monks were brazenly beaten and killed by government forces. The brutality and violence shocked the nation and the world.

“Where were Catholic leaders during all this?” Brother Thomas asked.

At the height of the conflict, the Catholic Bishops’ Conference of Myanmar (which, like most organizations in the country, uses the junta’s preferred name instead of Burma) released a statement urging Catholics to “make unceasing prayers and to offer special Masses for the welfare of the country.” The conference reassured citizens that the church was “doing chain prayers, fasting and perpetual adoration … for peace and development in the country.”

The statement went on to say, “In accordance with the canon law and social teachings of the Catholic church, priests and religious are not involved in any party politics and in the current protests.”

The absence of any direct criticism of the government crackdown was deafening. And many Catholics viewed the order for the clergy and religious to remain silent as an inexcusable washing of church hands. While the statement also said that lay Catholics were “free to act as they deem fit” with “proper guidance” from their religious leaders, most saw a clear message from the bishops to their flock: Keep quiet and stay politically disengaged.

“The statement was extremely disheartening,” said another young brother. “We were ready to act. Many priests and religious wanted to join the protests or find some other way to help the freedom movement, but we were told not to by our superiors.”

It is a commonly held belief here among Catholics that the decision not to criticize the regime and to keep religious and clergy off the streets in 2007 was made by local bishops in consultation with Rome.

During a speech in late September 2007, Pope Bendict XVI said he was following the “very serious events” in Burma and expressed his “spiritual closeness” with the people of Burma during “the very painful trial it is going through.” Benedict assured the people of his “intense prayer” and said that he “strongly hoped that a peaceful solution can be found, for the good of the country.”

If the statement sounds lukewarm, it’s because compared with pronouncements from religious groups and foreign entities it was tepid indeed. Days before the pope’s statement, Nobel Prize winner Archbishop Desmond Tutu compared the Burmese protesters to the “rolling mass action that eventually toppled apartheid” in South Africa. The Anglican bishop said he supported the people’s “peaceful protests to end a vicious rule of oppression and injustice.”

The Evangelical Fellowship of Asia, an influential group in the region, representing Burma’s 1.5 million Protestants, said, “We condemn this brutal attack on religious leaders and civilians. We call upon Burma’s military government to bring an immediate end to this bloody crackdown and to pursue a path of peaceful dialogue toward democratic governance.” The U.N. and nations around the world were also highly critical of the junta’s suppression of the protests.

Given the limpness of the official church’s response, many Catholic citizens in Burma, especially the religious, felt that the church hierarchy had lost serious credibility.

“How can we remain silent?” asked Brother Thomas. “As Catholics it is our duty to speak out against injustice. The church talks about the importance of social teaching and human dignity, but when it was time to speak out in Burma, nothing happened.”

There are reasoned arguments to be made for a nonconfrontational strategy. Diocesan officials stressed that open criticism of the junta could make life much worse for the church and laity. “We have to make compromises just to survive,” one official said.

Catholics, indeed, have a history of suffering persecution by their government (see accompanying story). Few will deny that Catholics are more vulnerable to draconian retribution than the majority Buddhist population. So one might argue that the decision to stay off the streets and remain silent during the protests and social upheaval might have been a clever move to allow the church to live to fight another day.

However, Brother Thomas thinks otherwise. “When will that day come?” he asked. “We can’t keep blaming our inaction on the generals. It’s an easy excuse for the bishops. They say that Catholics can’t take risks, but in reality most bishops just aren’t willing to put themselves on the line.”

Late one evening Brother Thomas looked pensively out on the village he serves. “We have two dictatorships in Burma,” he said. “One, the junta, who hate us. The other, the bishops, who won’t let us stand up.” He stopped and reflected for a moment. “We need more than prayers; we need deeds.”

Light and hope amid brutality -- Part 1

Power, politics and the church in Burma -- Part 3

World | Burma: Power, politics and the church in Burma

Hundreds of migrants are in limbo on rescue boats in Mediterranean