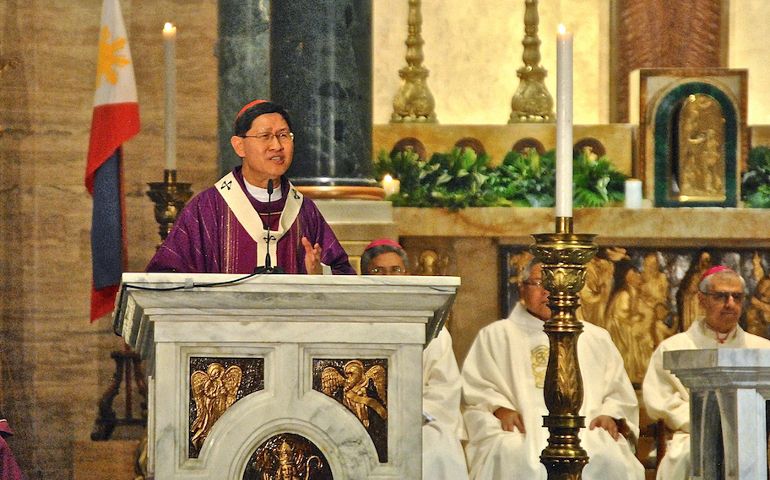 Manila, Philippines — Cardinal Luis Tagle at the Mass for the reopening Manila Cathedral on Wednesday evening stressed the Gospel message on true worship and appealed to the faithful to stop the worship of false gods.

In his homily in the packed Basilica of the Immaculate Conception here, Tagle offered examples of these gods, or "idols," and how they "destroy the church."

"For the false god called lust, many women have been sacrificed," said Manila's archbishop. "Many children have been prostituted. Persons have been treated as commodities."

"No more false gods," he pleaded, saying these "weaken the church ... our community."

Tagle also called out those who worship money and sacrifice the livelihood of others, such as those who do not pay their workers just wages. Enchantment with power also destroys community, he said, especially when one sacrifices principles, common good, even one's own family to get ahead of others.

They were celebrating the reopening of the cathedral after two years of reconstruction and retrofitting work on the century-old cathedral under oversight of Manila Metropolitan Cathedral Foundation, headed by Panganiban.

Tagle said, "I'm thankful to God that our readings for today are about true worship."

He said when the cathedral foundation chose to reopen on April 9, it did not know what the Gospel readings would be.

"But lo and behold, when I opened the missal, I said, 'Lord, the choice of the day was really yours, it was not ours. As we reopen our place of worship, you are teaching us how to worship.' "

A group of people there said the mention of timing suggests his comments had to do with the Supreme Court ruling on the Reproductive Health Law that pro-life groups, including Catholic bishops, oppose.

"It's clear Cardinal was connecting the Gospel to yesterday's court ruling allowing the RH Law because he talked about the timing of the Mass reading," homemaker Stella Lagasca from Antipolo, east of Manila, told NCR. She said she joined her parish prayer vigils to stop the implementation of the law.

The Supreme Court on Tuesday upheld the constitutionality of the law, except for parts of Sections 7, 17 and 23 and some provisions in its implementation rules.

Among other things, the law allows public health centers to provide free contraceptives and introduces reproductive education in schools. The sections of the law deemed unconstitutional include those that would have prohibited health care practitioners from refusing to provide reproductive health services.

Archbishop Socrates Villegas, president of the Catholic Bishops' Conference of the Philippines, issued a statement the afternoon of the ruling's announcement, appealing for respect for the court's decision that "truly watered down the RH Law."

He noted that the court in striking down eight provisions "upheld the importance of adhering to an informed religious conscience even among government workers." Villegas called the faithful to "work hand-in-hand" with people in favor of reproductive health, focusing on the church's own mission even in light of "such unjust laws."

"Let us move on from being an RH-law-reactionary group to truly Spirit-empowered disciples of the Gospel of life and love," Villegas wrote.

During Mass at the cathedral, Tagle praised donors, engineers, other experts and construction workers for their generosity, talent and dedication rooted in their love of God. He said the experience with them taught him how a church can "rise from rubble," how to strengthen a building, and how to renew a church community -- and lives.

Addressing survivors of typhoons, earthquake, armed attacks and other calamities around the country, he said that like the damaged and weakened cathedral, "the Filipino nation can rise," too.

To end abortion, don't ban it. Support families instead.