Cardinal Tagle: Good governance is a project for all citizens 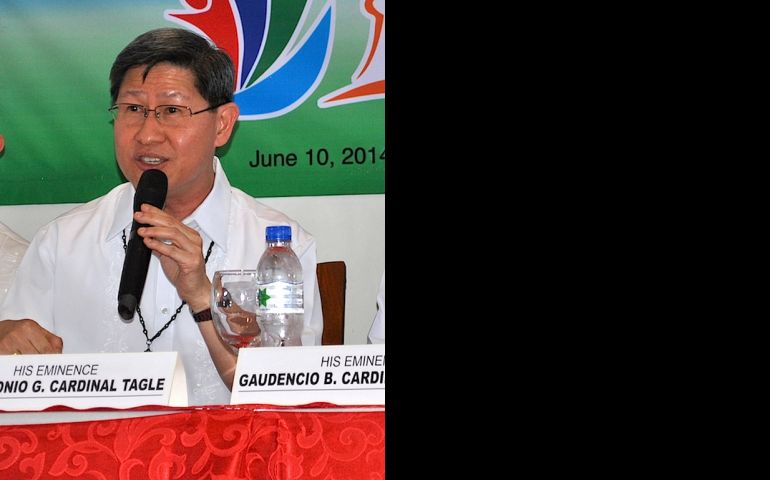 Cardinal Luis Tagle told reporters at the recent Eucharistic Congress press conference the pork barrel scam controversy tells a story of the country and its culture and calls for examination of practices and of individuals' conscience. (N.J. Viehland)

In a forum on good governance in Quezon City in mid-June, Tagle took a swipe at corruption and described those who steal from the people's money with a Filipino expression similar to "thick-faced."

He also questioned church members' preference for participating in liturgical and sacramental ministries in their parishes while hesitating to work in social justice ministry.

"Those who steal from the country's coffers: You have the nerve . . . (So thick-faced) . . . very brave!" Tagle said drawing applause from participants of the “Good Governance Forum” hosted by the Diocese of Novaliches in San Vicente de Paul Parish in Quezon City, northeast of Manila.

This is not the kind of bravery the Catholic Bishops' Conference of the Philippines (CBCP) is asking from the laity in this Year of the Laity, Tagle said. "We should use courage in being good," the cardinal stressed

Novaliches diocese organized the forum as part of its efforts to prepare parishioners for national elections in 2016.

Tagle spoke as the "pork barrel" controversy dominated Philippines media. Whistleblowers had implicated a number of current and past lawmakers in a 10 billion-peso (U.S. $227,671,000) scam in which officials allegedly diverted their priority development assistance fund (PDAF) to fake NGOs of the controversial businesswoman Janet Lim-Napoles.

Tagle asked forum participants, "Why is it when we are called to be pro-God, life, country and environment we become a coward, but when it comes to being mischievous, we are not only brave but very creative as well?"

He said the country, and the whole world are yearning for good governance, which he stressed is needed to restore the people's trust in fellow humans and institutions. "People and nations get paralyzed when trust is violated," Tagle pointed out.

Tagle, however, stressed that good governance is everyone's responsibility, and not only the politicians'. "Even those who are not in politics should work for good governance," Manila's archbishop said.

It is important to learn what is good governance "on the basis of Christian faith because it encompasses all aspects of Philippine society and every member has his role in nurturing good governance in one's own family, school, business and church," Tagle said.

Tagle issued the same appeal at the earlier press conference on the 2016 International Eucharistic Congress in Cebu, Central Philippines. When the cardinals at the gathering were asked to weigh in on the PDAF scandal, Tagle reminded people that the controversy is set in a wider context involving the whole country and the whole Filipino culture, and "tells us something about ourselves and not just about them (politicians)."

Even then, he appealed, "To everyone, especially the parents here: see how you raise your children. See whether in your relationships with them, seeds of corruption are already being sown." He shared the example of parents offering to reward their children so they would do as they are asked. No wonder, then, that when these children grow up to assume positions of power, they expect bribes in exchange for doing their job, Tagle pointed out. He advised people to make an examination of their conscience.

Tagle, at the Good Government forum also wondered about the imbalance of lay participation in the church's various ministries.

He observed there are too many lay liturgical ministers serving as lectors and commentators in various parishes and shared his wish to see more people volunteering in the social ministry work of the church.

"It’s good that we have many volunteers for lectors, commentators, but sometimes they are already too many that it takes weeks or months before they get their turn as a reader,” Tagle told forum participants.

“Why do they all want to become lector or commentator?" he asked.

He stressed, “That’s also okay, but why do they all want to serve as lay Eucharistic ministers? I’m not belittling their role. All I’m saying is how come whenever we ask for a minister for human rights people say, 'that’s dangerous' or 'scary?'” Tagle added.

“The sacraments are very much alive in the parishes . . . same with the liturgy,” he said. “But as I said sometimes the service of love – the social involvement – seems to be weak in the parish grassroots level. Sometimes it’s just an office in the diocese instead of an active ministry in the parishes,” added Tagle.

CBCP is leading a nine-year preparation for the commemoration in 2021 of the 500th anniversary of the arrival of Christianity in the Philippines. Bishops dedicated 2014 to the theme The Laity, to highlight the mission of lay Catholics in the church's work to "sanctify and transform the world from within."

World | Cardinal Tagle: Good governance is a project for all citizens