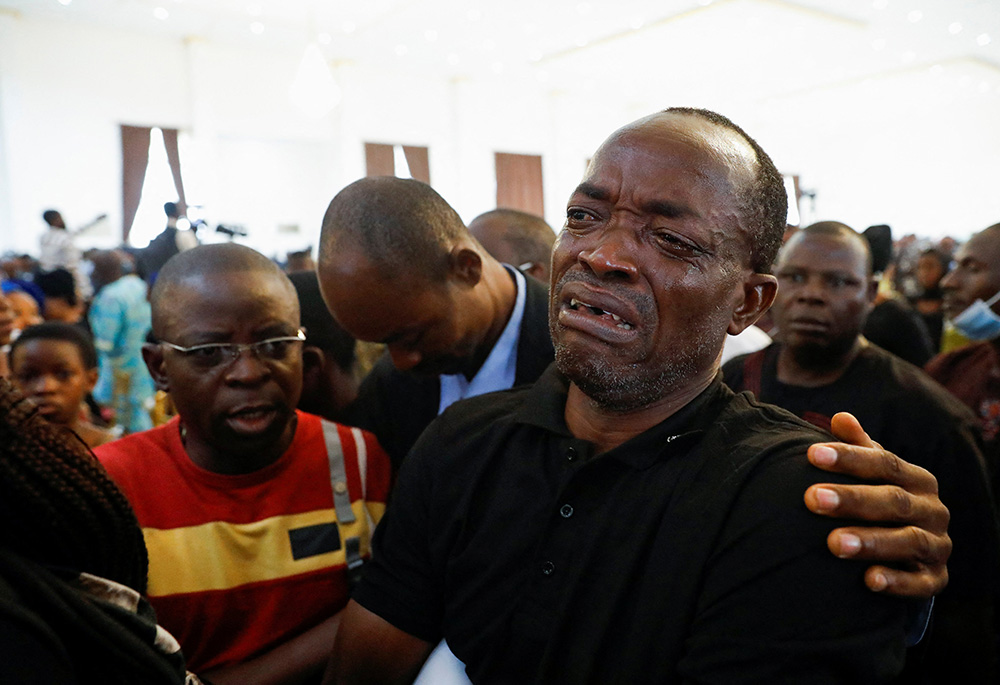 A man cries during a funeral Mass in the parish hall of St. Francis Xavier Church in Owo, Nigeria, June 17. The Mass was for at least 50 victims killed in a June 5 attack by gunmen during Mass at the church. (CNS/Reuters/Temilade Adelaja)

Fr. Victor Ibiyemi had just finished conducting a second Sunday Mass at St. Benedict Army Chaplaincy in Akure, Nigeria, when he heard news that gunmen had attacked, shot and killed about 40 parishioners during Mass at St. Francis Parish in the same Ondo Diocese on June 5.

Since that day, the atmosphere across many Catholic parishes in Nigeria has transformed into a sense of fear and trepidation, Ibiyemi and other Nigerian priests told NCR in separate interviews.

It was not the first time that Christians in the West African country had been attacked, nor would it be the last.

Fr. Joseph Aketeh Bako was abducted and killed in April. There have been attacks and kidnappings of at least six other Catholic priests across Nigeria this year alone. On June 19, gunmen also attacked congregants at the St. Moses Catholic Church and a Baptist church in Kaduna State, killing three people in the process and kidnapping several others.

"Since the June 5 shooting and massacre, the atmosphere here has been gloomy and sad. It is still shocking that gunmen could invade the church and shoot at innocent and harmless worshippers who have come to worship God on a Sunday. Since this ugly incident, we are all afraid and angry," said Ibiyemi. 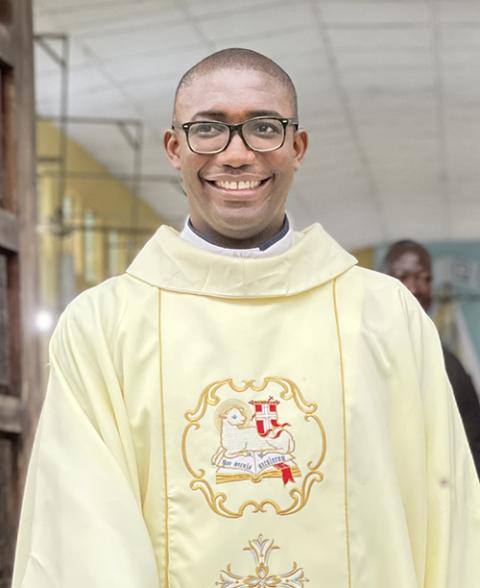 The most remarkable aspect about the St. Francis shootings and killings was the scale and determination of the attackers to storm and open gunfire on parishioners taking part in Mass.

The June 5 shootings shook the world, drawing condemnation from Pope Francis, who appeared to blame the attacks on religious hatred. Francis said he was praying "for the conversion of those blinded by hatred and violence" so that they "choose instead the path of peace" and righteousness.

In Nigeria, a country of more than 200 million people, about 54% of the population identifies as Muslim. About 45% identify as Christian, including 10% as Catholic.

Clashes over resources in some states could be fueling the religious tensions that are giving rise to the violence, kidnapping and shootings that are spreading across the country.

Ryan Cummings, an Africa-focused security expert, said that Ondo state — where St. Francis Parish is located — has been recording an upsurge in such tensions between the largely Muslim nomadic shepherds and predominantly Christian farmers.

While there has been no claim for the attacks, Cummings believes the fight over resources is one of the key contributors to the surge in violence and attacks on Christians in the region. Worse still, this trend could worsen ahead of elections.

"We've seen quite a significant upsurge in communal violence. I certainly think that moving into Nigeria's election cycle we will see an uptick in violence," Cummings, a director with security risk management consultancy Signal Risk, told the German outlet DW.

Concerns and worries among the Catholic and wider Christian community in Nigeria that violence will inflame ahead of elections next year are growing. 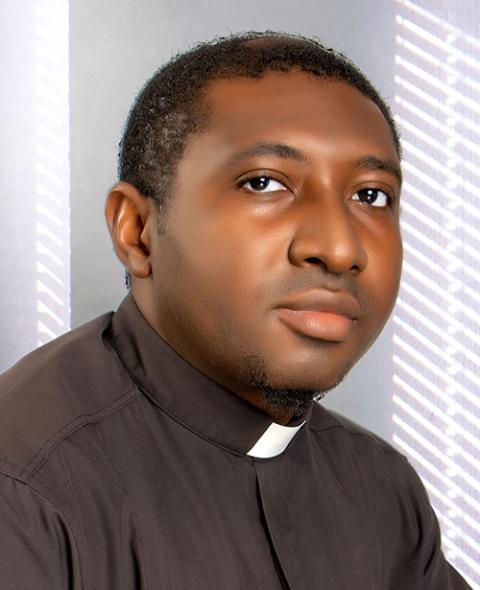 Jesuit Fr. Ujah Gabriel Ejembi, the parish priest at St. Joseph Catholic Church in Benin City, told NCR that he and other priests no longer feel comfortable traveling in clerical outfits, as they are afraid to be identified as priests.

"Presently, we live in fear. Richer parishes are now employing frequent services of armed men to protect the churches at nights and on special parish celebrations. In my parish, there are armed policemen every Sunday," said Ejembi.

Ejembi said the violence has led to Nigeria becoming a "failed nation."

"[The] security architecture has completely collapsed, which has led to increase in banditry and relentless kidnapping and even unpreventable lynching of so-called blasphemers," said the priest.

Yet it is not just religious institutions and congregants that are at the receiving end of violent attacks in Nigeria. The Institute of Security Studies found that in January 2022 alone, "a total of 1,486 people in the country were victims of insecurity" with 915 of these killed, while 571 suffered kidnappings.

The upsurge in insecurity is a "result of separatist agitation and associated repressive state responses," it notes.

Ejembi said the attacks on the Christian community in Nigeria are meant to be an "efficient strategy to suppress Christianity by subjecting its leaders to traumatizing experiences."

The kidnappers are also looking for cash through ransom payments for church leaders kidnapped, he added.

In May, a Nigerian prelate with the Methodist Church, Samuel Kanu-Uche, was kidnapped. The kidnappers demanded and reportedly received $250 000 in ransom before releasing the prelate.

Many religious leaders and theologians in Nigeria blame the government for not doing enough to deal with the growing insecurity situation, especially ahead of the elections in 2023.

Nigerian President Muhammadu Buhari is expected to sign a new bill that outlaws payments of ransoms for those kidnapped. This further complicates the situation, especially against the backdrop of sharp criticism of the security forces' handling of violence across the country.

The government of Nigeria has the duty to address and control this violence and to hold its perpetrators accountable, said Catholic theologian David DeCosse.

"In our complex, multireligious world, a rock-solid commitment to respect for the religious freedom of all is one of the key factors in creating a peaceful society," said DeCosse, who is director of religious ethics at Santa Clara University's Markkula Center for Applied Ethics.

Ibiyemi fears that Nigeria could become "unstable" during election season, as there has been a history of violence at polling locations.

At least six people died in May in violent skirmishes during a primary election within the ruling All Progressives Party to choose the party's representative for the Lagos House of Assembly's Alimosho constituency.

In the presidential race, the All Progressives Party has elected former governor of Lagos, Bola Tinubu, to contest against the country's former vice president, Atiku Abubakar, who is fronting the main opposition, the People's Democratic Party. The winner will replace Buhari, who has been in charge of Nigeria since 2015 and leaves the country among the poorest in the world. 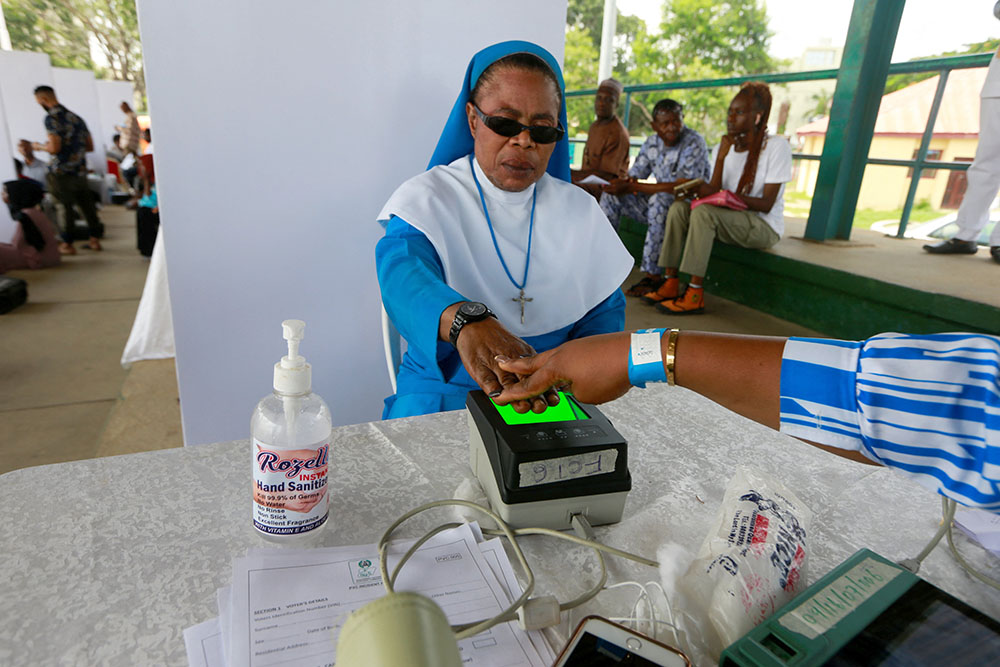 A nun has her fingerprints captured during the Independent National Electoral Commission voter registration exercise at a center in Abuja, Nigeria, June 23. (CNS/Reuters/Afolabi Sotunde)

A study conducted in 2019, when the country held its last election, showed that "the pre-election period was generally more violent and deadly. Worse still, the actual voting days could be equally violent.

Rinu Oduala, project director for the human rights and anti-violence advocacy group Connect Hub Nigeria, told NCR that the uptick in violence in Nigeria is due to "government negligence, porous borders for war weapons and criminals, constant injustice at the hand of Nigerian judicial institutions, corruption, unemployment, state violence, [and] ethnic and religious tensions stoked by political leaders."

She said: "In reality, many of these murders have political and religious motivations."

In 2021, nearly 6,000 Nigerian Christians were killed for their faith, Open Doors USA said in a May report. If the trend continues, the group said, it believes the numbers for 2022 will overtake those of 2021.

Ibiyemi said he wished the Nigerian government would do more to deal with the attacks and kidnappings at churches.

"We are calling for help from everywhere in the world because people are being killed and tortured by these terrorists," said the priest. "We are confused, afraid and sad."

A version of this story appeared in the July 22-Aug 4, 2022 print issue under the headline: Church killings in Nigeria leave Catholics 'confused, afraid and sad'.