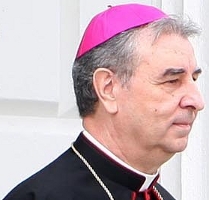 DUBLIN -- Ireland's foreign minister summoned the country's papal nuncio and demanded that the Vatican give a formal response to the Cloyne Report into the mishandling of clerical abuse.

The July 14 meeting came just a day after a judicial commission accused the Vatican of being "entirely unhelpful" to Irish bishops seeking to implement robust abuse policies.

Foreign Minister Eamon Gilmore told Archbishop Giuseppe Leanza that the Vatican had "undermined" best practice in child-safeguarding within the church.

The Cloyne Report said the Vatican, through its opposition to the Irish bishops' 1996 guidelines for handling child sexual abuse, gave comfort to dissenters within the church who did not want to implement the procedures. In a letter to the bishops, the Congregation for Clergy described the rules as "merely a study document" and refused to give the document formal recognition.

Gilmore said the Vatican intervention was "absolutely unacceptable" and "inappropriate." He said he had told Archbishop Leanza that an explanation and response were required as to why the Vatican had told priests and bishops they could undermine the rules.

Speaking after the meeting, Archbishop Leanza, who was named nuncio to Ireland in February 2008, said he was "distressed ... by the failures in assuring the protection of children within the church despite all the good work that has been done" and promised to deliver a copy of the report to the Vatican.

Responding to journalists' queries, Gilmore said: "I want to know why this state, with which we have diplomatic relations, issued a communication, the effect of which was that very serious matter of the abuse of children in this country was not reported to the authorities."

Gilmore said the Vatican had conveyed a message that somehow it was "all right to evade responsibility" for reporting these matters to the Irish authorities.

He said he had not set a deadline for a response but that he would judge what represented an appropriate period of time to respond to the formal request from the government.

Earlier the same day, Jesuit Father Federico Lombardi, the Vatican spokesman, said he would not have a specific comment on the Cloyne Report. He said the Vatican views this as one part of the sex abuse issue in Ireland, and he referred reporters to earlier statements by the pope and the Vatican on the gravity of the problem and the measures taken to resolve it.

The report, based on a judicial investigation into the handling of allegations of child sexual abuse against clerics in the Diocese of Cloyne, concluded that the church's own guidelines were "not fully or consistently implemented" in the diocese as recently as 2008.

It said that "the primary responsibility for the failure to implement the agreed procedures lies with" Bishop John Magee, a former secretary to three popes who has admitted to having an inappropriate relationship with a young man.