by Joshua J. McElwee
World
This article appears in the Francis in Chile and Peru feature series. View the full series. 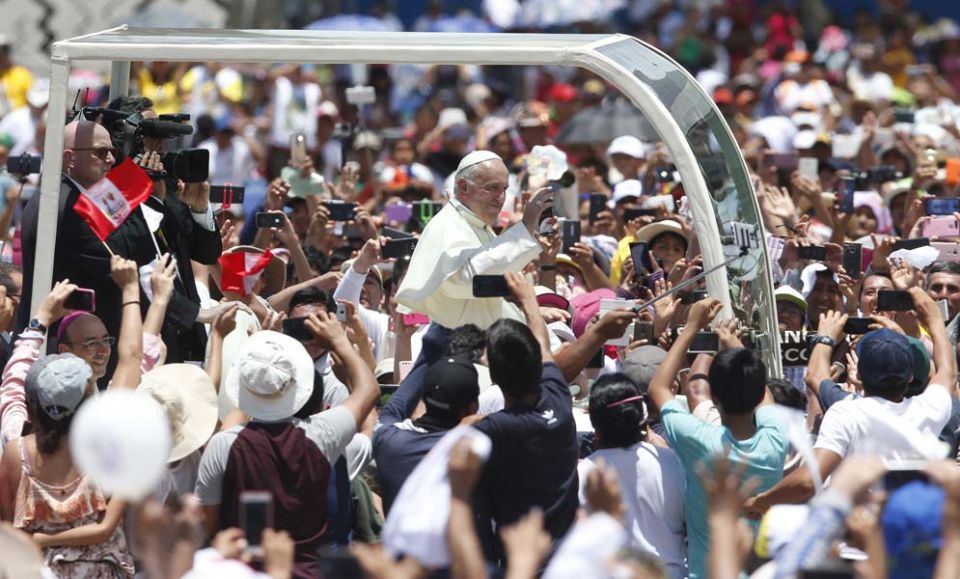 Pope Francis arrives for a meeting with people at the Jorge Basadre Institute in Puerto Maldonado, Peru, Jan. 19. (CNS/Paul Haring)

Lima, Peru — Pope Francis exhorted Peru's political leaders Jan. 19 to fight what he termed the "social virus" of corruption in a speech at the country's executive mansion less than a month since embattled President Pedro Kuczynski narrowly escaped impeachment over bribery charges.

While the pontiff did not refer specifically to the continuing Car Wash scandal, a cash for contracts scheme that has implicated political leaders in five Latin American countries, he pointedly said he wished to "urge" Peruvian leaders to build "a place of hope and opportunity for all, and not just for a few."

"Working together to defend hope demands that we remain very attentive to that ... often subtle form of environmental degradation that increasingly contaminates the whole system of life: corruption," said the pope, speaking outside Lima's Palacio del Gobierno to Kuczynski and hundreds of Peruvian legislators, judges and other public officials.

"How much evil is done to our Latin American people and the democracies of this continent by this social 'virus,' a phenomenon that infects everything, with the greatest harm being done to the poor and mother earth," said Francis.

"Corruption is preventable and calls for commitment on the part of all. I encourage and urge all those in positions of authority, in whatever sphere, to insist on this path."
—Pope Francis, in Lima, Peru

The pope called for "a culture of transparency among public entities, the private sector and civil society." In a small addition to his prepared text, he added: "Add I do not exclude church communities."

"Corruption is preventable and calls for commitment on the part of all," he continued. "I encourage and urge all those in positions of authority, in whatever sphere, to insist on this path."

Kuczynski has been accused of corrupt dealings with Brazilian construction company Odebrecht while he served as Peru's finance minister and prime minister. The accusations against the president came to light in the midst of an ongoing investigation by Brazilian authorities that spans several counties.

The president barely survived an attempt by the Peruvian Congress to impeach him Dec. 22, defeating the measure by only eight votes.

Appearing before the legislators in anticipation of the vote, Kuczynski, a former official at both the World Bank and the International Monetary Fund, said he was innocent of any "moral incapacity" but apologized for not being more cautious with the appearance of impropriety.

Kuczynski is also facing criticism for his Dec. 24 decision to pardon former president Alberto Fujimori, an authoritarian leader who held Peru's highest office from 1990-2000, and had served 10 years of a 25-year sentence for human rights violations such as kidnapping, torture and murder.

While Kuczynski's office said Fujimori was deserving of the pardon because he had "progressive, degenerative and incurable disease," the action led to days of protests and accusations that the current president had taken the move to gain support from a rival party in his fight against the corruption charges.

Francis is visiting Peru through Jan. 22 on the second leg of a weeklong journey abroad that started in neighboring Chile. Earlier on Jan. 19 the pope had traveled to Puerto Maldonado, a small city near Peru's southeastern border with Bolivia that sits at the edge of the Amazon Rainforest.

Meeting with some 4,000 of the Amazon's indigenous peoples, the pontiff criticized the ramp-up of the global extraction industry in the world's most biodiverse region and decried Peruvian national policies that he said "strangle" its some 350 native tribes.

Francis said local policies operate "under the guise of preserving the forest, [but] hoard great expanses of woodland and negotiate with them, leading to situations of oppression for the native peoples."

"These problems strangle her peoples and provoke the migration of the young due to the lack of local alternatives," he continued, speaking as Kuczynski sat in the front row of the audience.

In his later speech in Lima, Francis called on the Peruvian president to listen to the Amazonian peoples when considering policies that affect the rainforest.

"They preserve a direct link to the land, they know its times and ways, and so they know the catastrophic effects produced, in the name of development, by many projects," said the pope."

Francis travels Jan. 20 to Trujillo, in northwest Peru, for an outdoor Mass and a meeting with priests and religious. He heads back to Rome Jan. 21, arriving back in the eternal city the afternoon of Jan. 22.