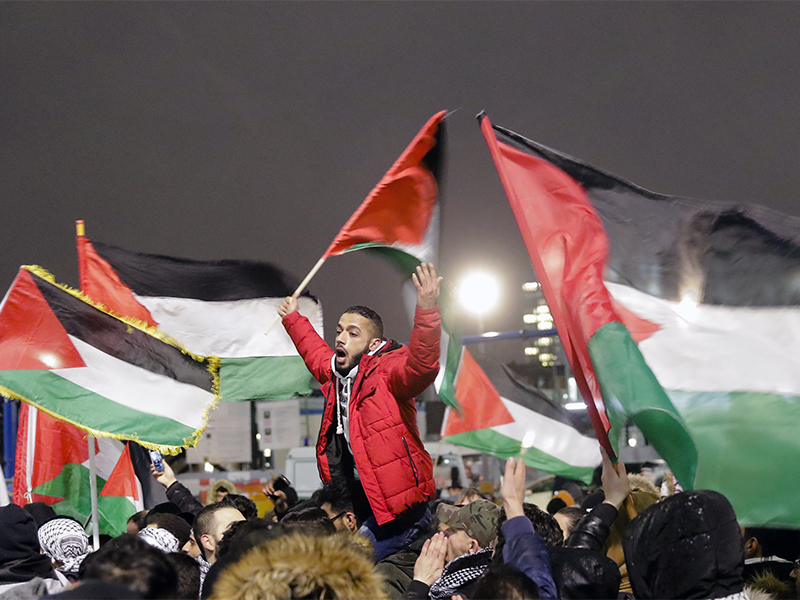 People of Berlin's Palestinian and Arabic communities protest against President Trump's recognition of Jerusalem as Israel's capital in Berlin on Dec. 12, 2017. (AP/Markus Schreiber)

Germany is rethinking its approach to combating anti-Semitism after a protest against President Trump's recognition of Jerusalem as Israel's capital turned the anti-Jewish prejudices of some Muslim immigrants into a national issue.

Chancellor Angela Merkel's struggle to form a government after an inconclusive general election on Sept. 24 has held up any clear decisions on the issue.

But with Holocaust Memorial Day coming up on Jan. 27, the anniversary of the 1945 liberation of Auschwitz, her Christian Democrats have decided to wait no longer. They want the Bundestag, the German parliament, to pass a resolution calling for migrants who promote hatred of Jews to be expelled.

"Whoever rejects Jewish life in Germany or questions Israel's right to exist can have no place in our country," their draft resolution says, adding that Germany's states should apply the current expulsion law more strictly in cases of hateful speech or acts against Jews.

"We must resolutely confront the anti-Semitism of migrants with an Arab background and from African countries," Stephan Harbarth, the Christian Democrats' deputy parliamentary leader, told the daily Die Welt, which first reported on the planned resolution against "imported anti-Semitism."

Several protests in Berlin over the weekend after Trump's Jerusalem decision on Dec. 6 triggered the official response because the demonstrators — many waving flags, including those of the Palestinians and the Hamas movement — burned Israel's flag and shouted, in Arabic, "Jews, remember (the battle of) Khaybar, the army of Muhammad is returning."

In neighboring Sweden, which is second only to Germany in the number of Syrian migrants it has taken in, Prime Minister Stefan Löfven responded to criticism — after the Dec. 9 firebombing of a synagogue in Gothenburg by Syrian and Palestinian immigrants — that the government was not taking anti-Semitism by Muslims seriously, by proposing increased funding for trips to Auschwitz for students in Swedish schools.

"We should not close our eyes to the fact that many people have come here from the Middle East, where anti-Semitism is a widespread belief, almost a part of the ideology" that is prevalent, he told the Swedish Jewish magazine Judisk Krönika. "Although Muslims are a vulnerable group, that doesn't make it any more legitimate for them to be anti-Semite."

In Germany, the official outcry to the anti-Semitic protests recalled the one that followed reports two years ago from hundreds of women who said they were groped, sexually assaulted and robbed by men of Arab appearance at outdoor New Year's Eve festivities in Cologne.

After initially welcoming waves of Middle Eastern refugees that summer, a backlash against "foreign infiltration" set in. One of the results was the rise of the anti-immigrant Alternative for Germany (AfD) party, which is now the third-largest in the Bundestag.

By adding Jews to the immigration debate, last month's protest touched Germany's most sensitive wound and prompted politicians to ask how to counter a new "Islamic anti-Semitism" less responsive to their traditional strategies.

After the Second World War, West Germany sought to fight anti-Semitism by educating its people about racism in their nation's past. As the decades passed, schools added meetings with Holocaust survivors and class visits to death camps to awaken younger generations to the issue.

But those strategies were all directed at fellow Germans. With the rapid arrival of over a million migrants, mostly Muslims from the Middle East and Africa, Germany faces newcomers from societies that tolerated and even encouraged hatred of Jews.

Last month, a study commissioned by the American Jewish Committee in Berlin confirmed what many Germans — especially German Jews — already knew. Interviews with dozens of Iraqi and Syrian migrants showed that anti-Semitic and anti-Israel prejudice was widespread among them.

Interviewers found that the migrants hated Jews both for political and religious reasons and that migrants also believed rich Jews controlled the world thanks to "a conspiracy theory frame of mind that also explained the wars in Syria and Iraq," said historian Günther Jikeli, author of the study.

Many were ignorant about the Nazi murder of 6 million Jews in Europe during the Second World War, he said.

Germany's Jewish minority, estimated at around 200,000, has been warning about growing anti-Semitism in recent years, but politicians have reacted slowly. Few tackled the essential question of how to get migrants to embrace the country's postwar taboos.

Long-established German Muslim leaders agree that many newly arrived Muslims are openly anti-Semitic and these leaders support calls for tougher measures, but they chafe under the polarized "us versus them" atmosphere the debate could foster.

"Sometimes I think we should put up a giant sign along the refugee route to Germany that says 'Welcome, you are now in Europe, such and such is not acceptable here,'" said psychologist Ahmad Mansour, an Israeli Palestinian living in Germany since 2004.

"Of course we need better police and better laws, but not only that," he told DLF radio. "Why aren't we helping teachers to explain the Middle East conflict better, to discuss conspiracy theories and teach youths how to think critically about such (prejudiced) views?"

Politicians are looking for quicker solutions.

One idea with wide support is the appointment of a federal commissioner on anti-Semitism who could be the government's go-to person for all issues dealing with hate speech and crimes against Jews.

The European Commission appointed a commissioner in 2015, after years of appeals from Jewish communities in Europe, but it took the Berlin protests to prompt German Interior Minister Thomas de Maiziere — a key Merkel ally — to call for one to be named in the next government.

Justice Minister Heiko Maas looked to the integration courses for migrants, which help them learn German and qualify for a more rapid naturalization, to counter "imported anti-Semitism."

"It's urgently necessary for integration courses to emphasize the Holocaust and its meaning for our society even more than they do now, and include questions about it in their final exams," he said.

Sawsan Chebli, the daughter of Palestinian immigrants who is now Berlin's state secretary for relations with the federal government, suggested that all migrants be required to visit a concentration camp.

"This generation (of migrants) has a harder time identifying with Germany than mine did," she said. The memory of Nazi crimes could help unite all people in Germany in the fight against discrimination, she explained.

While welcoming these statements, the head of the Central Council of Jews in Germany said the older anti-Semitism of the far right was just as dangerous as the new version.

"Most attacks actually come from the right-wing extremists, while the most anti-Jewish demonstrations and the loudest anti-Semitic insults have been coming recently from the Muslims," Josef Schuster told Die Welt.