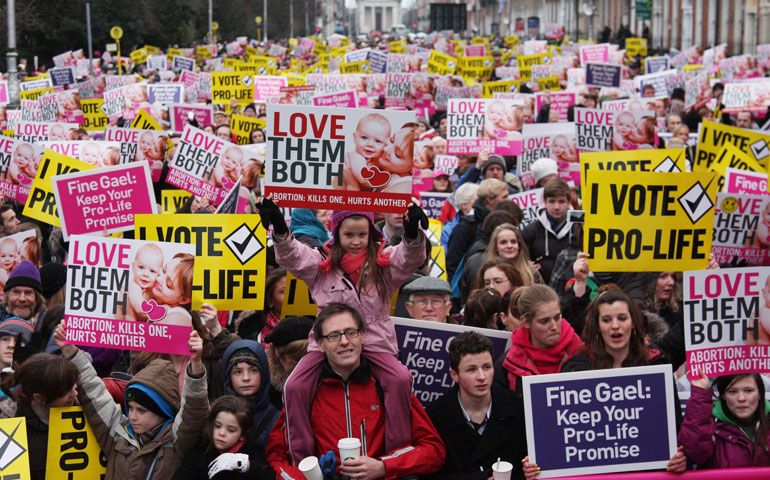 People gather for a pro-life vigil outside the Irish parliament in Dublin Jan. 19. (CNS/John McElroy)

Dublin — After 30 years, five constitutional referendums and multiple headline-grabbing cases, Ireland’s blanket ban on abortion remains one of the most restrictive in the world, admired and abhorred by activists on alternate sides of the issue.

But after Irish Prime Minister Enda Kenny introduced in April legislation to activate a latent 1992 Supreme Court ruling that authorized termination in cases where a woman’s life is at risk, 2013 could prove a tipping point in the decades-long standoff.

Multiple opinion polls show that public support for at least some access to abortion now tops 60 percent. Meanwhile, the moral authority of one of the country’s most powerful anti-abortion institutions, the Roman Catholic church, has deteriorated in the wake of a series of sex abuse scandals.

“We are 21 years after that Supreme Court judgment now and we are still waiting on legislation,” said Sinead Ahern, a spokeswoman for Choice Ireland. “I think you can’t underestimate the change in the political landscape that we are seeing, that we have a government who is actually about to address this issue.”

Anti-abortion activists are moving to repel efforts to loosen the ban. They have launched a campaign demanding that Kenny’s Fine Gael Party make good on pre-election commitments.

“If they keep going ... they will have for the very first time changed something very fundamental in Irish law and in Irish medical practice,” said Berry Kiely, a pediatrician and medical consultant with the Pro Life Campaign. “They will be saying there are situations when it is OK to directly and intentionally kill an innocent human being.”

The battle was triggered in part by the death of a 31-year-old woman named Savita Halappanavar. Denied an abortion at University Hospital Galway amid a precarious miscarriage in October, Halappanavar subsequently developed sepsis, or a blood infection, and died. Multiple investigations are underway.

The death ignited outrage, both in Ireland and abroad, sending demonstrators into the streets demanding the Irish government act to formalize access to abortion in cases involving the mother’s life.

Ireland’s contemporary abortion ban is rooted in a 1983 constitutional referendum, but it has faced several challenges. Most prominently, in 1992 a 14-year-old rape victim appealed to the courts to be allowed to travel abroad to get an abortion on the grounds that her pregnancy made her suicidal. In what became known as the X Case, the Irish Supreme Court ruled a woman has the right to an abortion if her life is in danger, including the risk of suicide. The girl miscarried shortly thereafter and in practice the abortion ban remained in place.

Three referendums followed in 1992. Two were successful, including the right of pregnant women to travel outside the state and the right to access information about abortion services in other countries. The third, which would have upheld the abortion ban even in cases of suicide risk, was rejected.

In 2002, anti-abortion activists launched a fifth referendum campaign to strike suicide risk as grounds for an abortion in Ireland. It too failed.

More recently, three women challenged Irish abortion laws by putting what is known as the ABC Case before the European Court of Human Rights. The 2010 ruling proved a mixed bag -- the court determined there was no right to an abortion, but demanded that the Irish government specify under what circumstances doctors could perform the procedure to save a woman’s life.

Abortion has remained the third rail of Irish politics, generating searing rhetoric and fierce campaign tactics. But the tone of the public discourse shifted noticeably in 2012, according to some. A group of Irish women who had traveled abroad for abortions because severe fetus abnormalities meant their babies would not survive outside the womb went public with their stories. It was unprecedented in a country where abortion was once unspeakable.

Mara Clarke, director of Abortion Support Network, a U.K.-based nonprofit that assists some of the approximately 5,500 Irish women who travel for abortions annually, said her clients range in age from 14 to 46. Some are rape victims. Others are trying to escape abusive relations or are battling mental health issues.

Most disturbing is the inaccurate medical information that many received in Ireland, Clarke said, including that abortion will lead to cancer, infertility, and drug and alcohol addiction.

“The reason we do this is because we know when you restrict abortion you don’t stop abortion, you just make it that when faced with unplanned pregnancy women with money have options and women without money have babies or try really desperate and dangerous things,” Clarke said.

Anti-abortion activists said they are well aware that Irish women are traveling abroad to obtain abortions, but argue that providing for those abortions domestically is not the answer.

“I think each one of those abortions is a tragedy for the mother and for her baby,” said Irish Sen. Rónán Mullen. “I think we really need to all work together to encourage women in this situation to feel that they are not alone.”

Church officials oppose the current legislative action. In a joint statement released in early May, Irish bishops described the efforts as “morally unacceptable.”

“We encourage a deeper understanding of the inviolability of the right to life of both a mother and her unborn child, in all circumstances,” they said in a statement. “Accordingly, at this crucial time, it is essential that all who share these beliefs make them clear to their legislators.”

Boston Cardinal Sean O’Malley withdrew from the Boston College’s May 20 commencement ceremony in protest over the keynote speaker, Kenny.

Kenny has said he wants the abortion legislation, known formally as the Protection of Life During Pregnancy Bill 2013, made law by July. But there is dissent even among pro-abortion-rights activists about how far abortion laws need to go in Ireland, and how effective the legislation will be in meeting the needs of women with crisis pregnancies.

Mary Favier, a family practitioner and a founding member of Doctors for Choice, said that she is more optimistic than she has ever been that Ireland will soon provide at least some access to abortion. But she also said that the definition of women “at risk” will be so narrowly defined that it may apply to fewer than a dozen each year.

“The difficult thing now is the legislation that is going to come in over the summer is going to affect so few women it is going to actually make very little difference,” Favier said. “The campaign will have to start all over again.”

[Megan O’Neil is a graduate student at the University of Southern California Annenberg School for Communication and Journalism and part of the Knight Program on Media and Religion. Her reporting trip to Ireland was funded by the Knight Foundation and the Luce Foundation.]