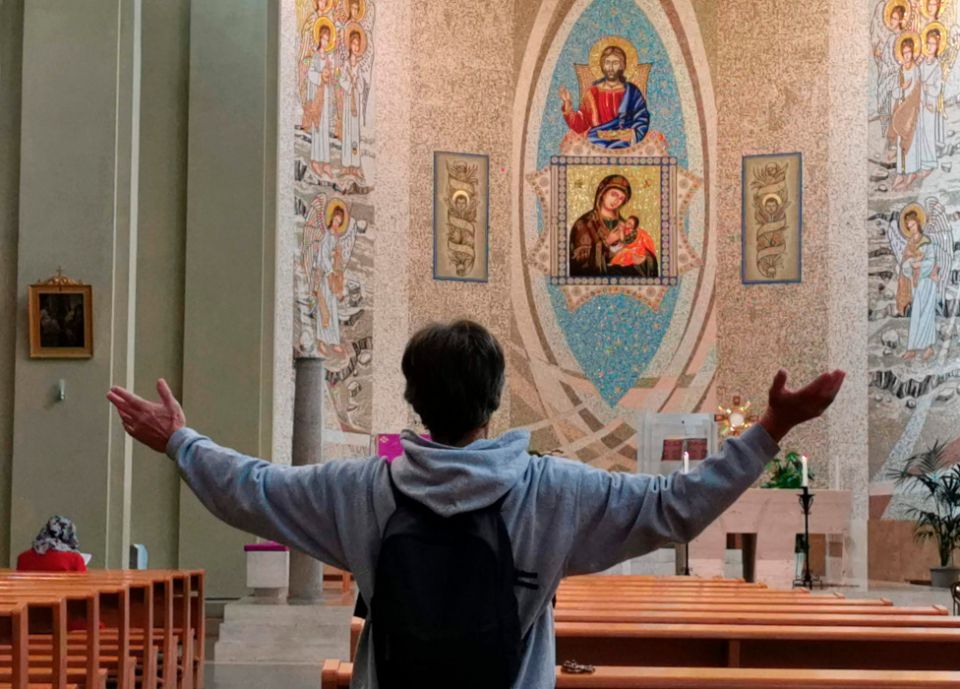 A man raises his arms in prayer at the Church of Santa Maria delle Grazie al Trionfale in Rome March 17, 2020. Many churches in Italy remain open for prayer amid a nationwide lockdown to prevent the spread of the coronavirus. (CNS/Junno Arocho Esteves)

Rome — While many churches in Italy remain open, visiting a church to pray is not a valid excuse for leaving one's home during Italy's COVID-19 lockdown, said a note from the Ministry for Internal Affairs.

Cardinal Gualtiero Bassetti of Perugia, president of the Italian bishops' conference, had asked the government to clarify the lockdown rules and how they apply to the church and church services.

People who want to pray in a church may do so only if "the church is situated along one's way" to or from a government-approved reason for leaving one's home: going to the grocery store, pharmacy, doctor's office or to work when it is necessary and cannot be done from home, said the ministry's response, which was posted on its website March 28.

Law enforcement officials can stop anyone who is out in public; when they leave their houses, people are required to carry with them a "self-certification" swearing they are not under quarantine and have not tested positive for COVID-19 and stating the reason for which they are outside.

The government can fine or even jail those who lie on the form. On March 28 alone, the ministry said, police demanded the forms from more than 203,000 people and fined close to 5,000 of them. The figures do not include the number of people the police simply advised to go home.

After almost three weeks on lockdown, Roberto Speranza, Italy's minister of health, said March 29 that the country was still in the worst phase of the pandemic and people should not let their guard down. The health ministry reported that day that a total of 97,689 people in Italy had tested positive for COVID-19 since February; 10,779 people had died; and 13,030 have recovered.

The Internal Affairs ministry's Department for Civil Liberties and Immigration, in the note about how the lockdown measures impact churches, said, "The measures for containing the COVID-19 epidemic emergency carry with them the limitation of various constitutional rights, including the exercise of worship, but they do not foresee the closure of churches nor a ban on religious celebrations."

"Nevertheless, the ceremonies must take place in the presence of only the celebrants and the assistants necessary for the rite — without the presence of the faithful — to avoid gatherings that could become potential occasions of contagion," the note said.

Weddings, it said, are not prohibited, but the same rules apply: "They can take place only in the presence of the celebrant, the bride and groom and the (two) witnesses, respecting the prescribed distance between participants."

The ministry also provided some logistical guidance for the celebration of Holy Week and Easter liturgies that are to be broadcast or livestreamed.

"The presences of persons must be understood to be limited to the celebrants, the deacon, the reader, the organist, the cantor and those handling the transmission," it said. Those people, and only those people, if stopped by the police can list "necessary work obligation" as the motive on their self-certificate, "even though liturgical service is not strictly comparable" to a job.