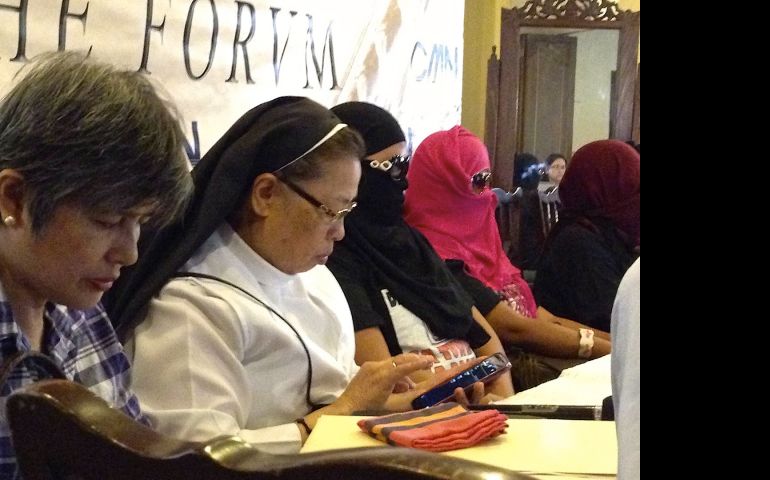 Manila, Philippines — Benedictine Sr. Mary John Mananzan wasted no time: as soon as she had listened to pleas of women claiming to have been abused through the so-called “sex for flight” scheme, she got on the phone to call the Department of Justice’s Witness Protection, Security and Benefit Program (DOJ-WPP) right then and there. As acting director, Martin Menez’s job is to see that people admitted to witness protection receive help.

Mananzan was speaking on another issue at a media forum Feb. 18 that also called attention to the plight of overseas Filipino workers, or OFWs.

Latest available census data estimates that 2.2 million Filipinos worked abroad during the period of April to September 2012. One out of five work in Saudi Arabia, the country where the women at the forum had been before they fled from employers they said raped or abused them.

The abuses, however, did not stop at the homes where they worked.

Mananzan told NCR at the forum, “I am angry.”

The former chair of the Association of Major Religious Superiors in the Philippines (AMRSP)  listened to the Filipino domestic workers complain about lack of help from their government after they had revealed their experience of the controversial sex-for-flight scheme last year in separate probes by committees of the Philippine Senate and House of Representatives.

The women said they fled employers in Saudi Arabia who raped or abused them. Additionally, one of the women, code-named “Angel,” said she felt violated when she reported being raped. One of the labor officials she talked to used “lewd” language in questioning her about the incident, including whether she enjoyed the sex. Another former OFW had told a Senate hearing that labor official attempted to rape her.

After being belittled for reporting abuse, it is understandable that victims would be apprehensive about dealing further with officials said Sandra Cam, a former witness to illegal gambling probes who accompanied the women to the forum. NCR was able to talk to Acting Director Menez Feb. 21.

“Sister Mary (Mananzan) asked why we did not cover these women OFW who revealed sex-for-flight activities,” Menez said.

He told NCR that witness protection program coverage is "voluntary" and the women in question did not apply to be included in it. He said those who say the program has been biased against common people just need to "scan though the profiles of our witnesses, and they will see many of them may be even poorer than the so-called sex-for-flight witnesses.”

He said the nun gave him the names of the women at the forum and told the DOJ official the women complained that the department was not helping them.

“I told Sr. Mary no one has applied with us for witness protection, but to send them here now. I was waiting for them, up to now. I canceled my appointment to go to the Senate that afternoon so I could attend to them,” Menez continued.

Mananzan, co-convener of the Abolish Pork Barrel Movement Philippines, was invited to the recent forum held by Catholic Media Network to explain her group's opposition to giving one person full discretion over release of large sums of public funds. She called for "transformation of government's budgetary system" by scrapping presidential DAP (Disbursement Acceleration Program) and other so-called pork barrel funds of legislators.

The former migrant workers also invited by organizers were introduced by Sandra Cam, president of the Whistleblowers Association of the Philippines. They voiced complaints of "favoritism" in the justice department’s treatment of witnesses. Cam said VIPs testifying in ongoing probes of allegations of corruption and misuse of funds by public officials are fetched safely back home from overseas, while the OFWs received  nothing from the DOJ.

The women reporting abuse faced television cameras as they had done in sessions in the chambers of Congress - with their heads wrapped in veils and most of their features hidden by large sunglasses.

“Angel” broke down in tears. She said, “We are still hiding behind our aliases. We are afraid because our children are still young. We don’t have husbands defending our family.”

The 30 year-old mother, told NCR her mother has been helping her care for her two sons since she left to work abroad in 2010. She went to the Middle East for work because of lack of support from her children’s father.

“Their father doesn’t give me even a centavo, so I decided to work abroad. But around my third month as a DH (domestic helper) abroad, I ran away after my employer raped me.” She now just sells snacks near her home in Rizal province.

She said she felt “raped again” when the labor official questioned her at the embassy.

“It hurts me more to see he was only suspended,” she said. “We were expecting he would be removed from service.” Weeping, she continued, “I’m appealing to the president of the Philippines, President Noynoy Aquino, you should give attention to our complaints about those people who are not suitable officials of our government.”

Labor Secretary Rosalinda Baldoz in December announced that a fact-finding team her department sent to Saudi Arabia had found evidence of “simple misconduct” by acting Labor Attache Mario Antonio. She said the team confirmed Antonio used vulgar and indecent language while talking to distressed OFWs and used an office laptop to view pornography. She ordered Antonio’s four-month suspension without pay, but the official denied the allegations and is reportedly appealing for the minimum one-month penalty.

Two other labor officials would be charged separately from simple negligence to grave misconduct, the labor department's communication director Nicon Fameronag  announced last August. Asked about the current status of the cases against the three officials, the labor communications office staff told NCR Feb. 20, "Director Fameronag does not want to say anything more about this issue now.

Reacting to the stories of the OFWs at the forum Mananzan could not help share, "I'm so touched!”

She plans to call a meeting of AMRSP partners.

“I would like our response to be comprehensive - that includes a livelihood program, legal aid, and of course, they need counseling. They need very much to be helped to deal with that trauma,” the nun told NCR.

She said she would like to bring people from the AMRSP’s committee on sanctuary, which she belongs to, together with Whistleblowers group. Mananzan also wants to engage the AMRSP’s women and gender committee, which she chairs.

“We have partners for migrant concerns, and I would also like to involve the Women’s Crisis Center,” Mananzan said.

AMRSP is a joint body of the association of men and association of women superiors of religious orders serving in the Philippines. The association seeks to promote the consecrated life of its members, study common concerns, collaborate in responding to them, and “pursue prophetic witness in the Filipino Church and society,” according to their website.

In 2008, it established a sanctuary committee to “give protection to select people with integrity,” Mananzan told reporters at the forum.

Rodolfo Lozada, Jr., his wife and children are prominent beneficiaries who received shelter, protection and financial, legal and other help when Lozada, speaking from experience as head of the government’s Philippine Forest Corporation, testified in the Philippine Congress that the husband and allies of ex-president Gloria Arroyo were allegedly overpricing contracts and taking kickbacks for the construction of a national broadband network.