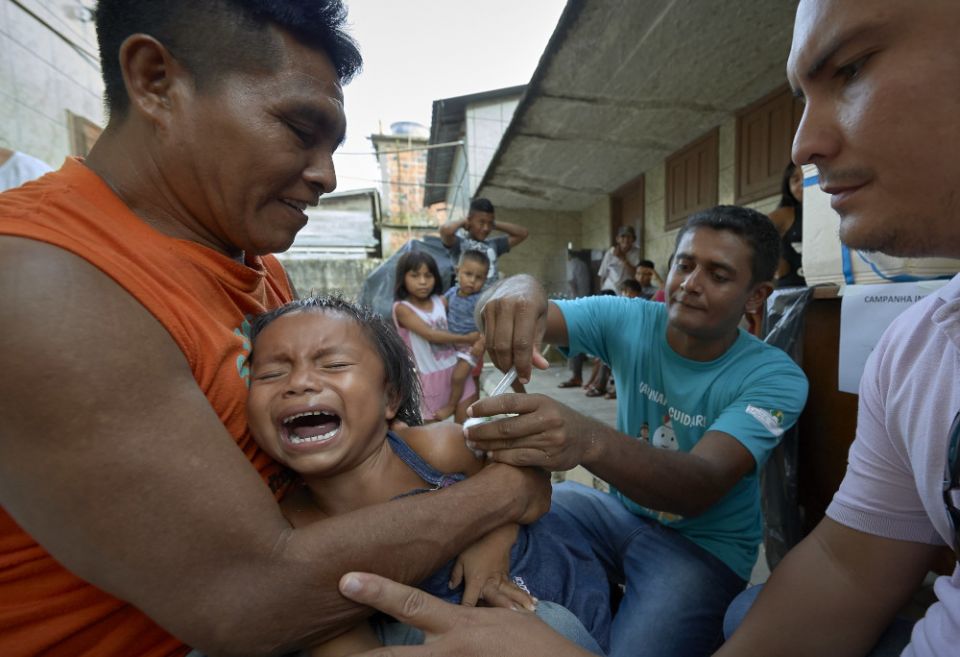 Boa Vista, Brazil — Consolata Br. Carlo Zacquini was ministering among the Yanomami people in a remote area of Brazil, near the border with Venezuela, when gold miners invaded their lands.

After a violent confrontation in which miners killed four Indians and the Yanomami killed four miners in retaliation, government officials moved in.

"But instead of evicting the miners, they evicted the missionaries and the medical teams" who were aiding the indigenous people, recalled Zacquini, 82.

By the time the Consolata missionaries were allowed to return to their mission on the Catrimani River several years later, "there were thousands and thousands of miners," Zacquini said.

With the miners came violence and diseases like malaria, to which the relatively isolated Indians had no resistance. In one village, no one survived. In others, as many as one-third of the villagers succumbed, some to disease and others to malnutrition.

"Many Yanomami died," Zacquini said. "No one will ever know how many."

Encounters with outsiders, followed by violence, disease and death, are a tragic pattern in the history of Amazonian indigenous people since Europeans first ventured into the lowlands nearly 500 years ago. Diseases to which South American peoples had no immunity swept ahead of the colonists, decimating the population.

The cycle of disease and violence recurred as fortune seekers invaded and plundered indigenous territories for timber, the meat and hides of wild animals, gold and oil. And it continues today, threatening some of the last people on earth who live in the forest as their ancestors did, shunning contact with the outside world.

"The Amazon is rich in water, timber, underground minerals, wild game and other things, and white people are utilizing it," said Davi Kopenawa, a Yanomami shaman and a spokesman for his people. He remembers when tens of thousands of miners invaded his people's lands.

"I suffered greatly, because our place was polluted and dirty," he told Catholic News Service. "There was sickness. They killed my relatives. But the government did not evict them."

Although the Brazilian government finally created a territory for the Yanomami people, miners continue to invade, and Kopenawa said his people continue to die.

As many as 5,000 gold miners continue to work illegally in Yanomami territory, turning the forest into huge barren, cratered swaths of land and poisoning the water and fish with the mercury they use to extract the precious metal, he said.

"Gold mining is a disease, and it creates disease" with the mercury, oil and gasoline used in pump motors, which also spill into the rivers, Kopenawa said. "It kills the life of the Indian, the white man, the river and the fish."

Health experts say miners brought diseases like malaria and tuberculosis into the region, as well as sexually transmitted illnesses, including HIV. Most recently, a measles outbreak swept through Yanomami groups, probably introduced by miners from Venezuela, which is suffering from a measles epidemic.

At greatest risk are several groups of Yanomami who live in the forest. Seven South American countries are home to such isolated people, but the largest concentration is in Brazil, mainly along the heavily forested border with Peru.

Experts believe they are descendants of groups that had violent encounters with outsiders in the past, probably during the late 19th and early 20th century, when brutal rubber barons enslaved and killed indigenous Amazonians in that area.

The groups move, depending on the season and the places where they can find plants, animals and fish. Some plant small patches of crops like cassava and settle for a time, building simple shelters out of palm fronds.

The Brazilian bishops' Indigenous Missionary Council has helped indigenous groups win the designation of territories in places where there are still isolated people, including the Yanomami territory and the Javari Valley indigenous territory on the Brazilian-Peruvian border.

Pope Francis spoke of those groups when he met with indigenous people in Puerto Maldonado during his visit to Peru in January 2018.

Calling them "the most vulnerable among the vulnerable," he urged his listeners to "continue to defend these most vulnerable brothers. Their presence reminds us that we cannot consume common goods at a greedy pace."

The working document for the Synod of Bishops for the Amazon, which Francis has called for October at the Vatican, notes that isolated groups are at particular risk from industrial activities such as mining, logging, large-scale agriculture; construction of dams and roads; and drug traffickers who pass through the territories they inhabit.

Not only is there a danger of violent encounters, but isolated people also lack resistance to common diseases, such as colds and flu, which they could contract even from contact with clothing or implements handled by a person who is sick.

The risk is especially great for women, according to the document. In some cases where contact has occurred, as many as 90 percent of the people who have died have been women.

The document calls for the church to demand that governments protect isolated groups and the territories they inhabit. The groups should be protected as long as they avoid outsiders, but allowed to initiate contact when they choose to do so, the document said.

The document recommends that dioceses near land inhabited by isolated groups, especially along borders, establish special teams to work together on pastoral plans and should ensure that people in the area understand the isolated people's rights.

Before the 1980s, Brazil's official policy was to "assimilate" indigenous peoples into the wider national society. Its Indian affairs agency, FUNAI, initiated contact with groups in order to pave the way for road construction, oil drilling or other projects in the Amazon.

The high number of deaths that resulted from those encounters led to a change in the official policy and, since the 1980s, FUNAI's mandate has been to identify groups from a distance, determine the extent of the area they use, and protect that space.

FUNAI has confirmed the existence of 28 isolated groups, with more than 80 reports of possible others.

Because of budget cuts in recent years, however, FUNAI has closed some of the guard posts it maintained at the boundaries of areas protected for isolated people.

President Jair Bolsonaro, who took office in January, has renewed the call for "assimilation" of the country's indigenous people into national society and has proposed opening up indigenous lands for mining and agriculture.

Church workers fear that could result in more invasion of areas inhabited by isolated groups, and possibly renewed efforts by the government to contact those groups.

Isolated people sometimes seek contact because of illness or threats from outsiders. Sometimes, however, the indigenous groups, and the conflicts, can be violent and ongoing.

In the Javari Valley, there was a violent contact between an isolated group of Korubo Indians and a group of Matis villagers in 2015. Officials still are not sure how many people were killed before FUNAI intervened.

FUNAI launched an expedition in early 2019 to contact members of the Korubo and persuade them to stay away from the villages. The agency later announced that the contact was peaceful.

FUNAI officials said the expedition was necessary to prevent future conflicts and protect the lives of both the isolated and the settled Indians. Leobens worries that it could be a step toward more deliberate efforts to contact isolated groups.

Isolated people are symbols of cultural diversity and reminders that "this diversity should be valued and respected," he said. "They are contributing to the protection of the Amazon, of their territories and of the planet, for the common good."

The bishops participating in the synod for the Amazon must recognize "the importance of these peoples and of their protection and the protection of their territories," Leobens said. "They have the right to exist and to make their own decisions about the future."