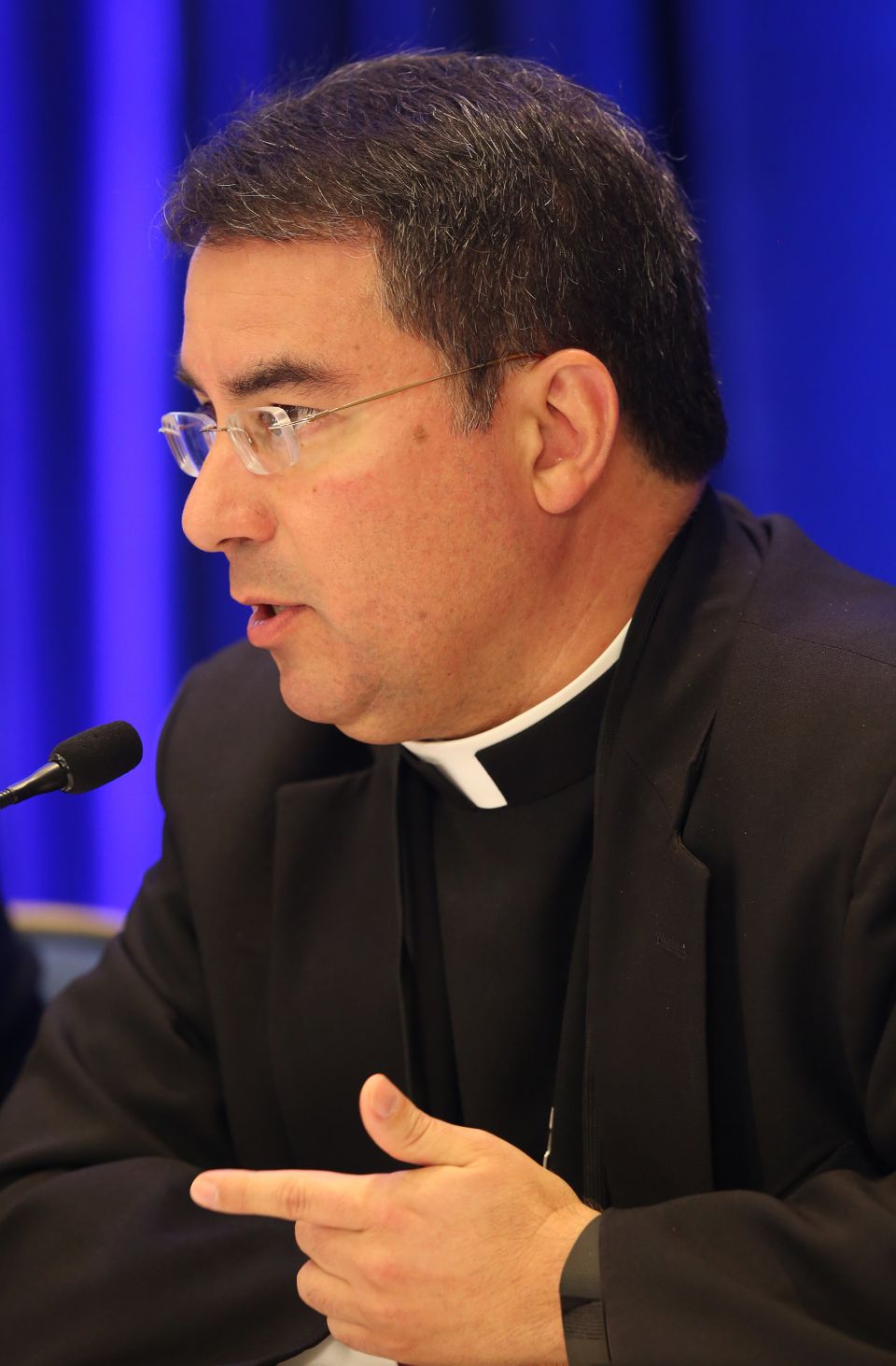 Bishop Oscar Cantu of Las Cruces, N.M., chairman of the U.S. bishops' international policy committee, responds to a reporter's question during a Nov. 13 news conference at the fall general assembly of the U.S. Conference of Catholic Bishops in Baltimore. (CNS/Bob Roller)

Baltimore — Persecuted Christian minorities in Asia, Africa and the Middle East are at risk of being forgotten, according to the chairman of the U.S bishops' Committee on International Justice and Peace.

"It is important that the church tell their stories," said Bishop Oscar Cantu of Las Cruces, New Mexico, during a news conference Nov. 13, the first day of the bishops' annual fall general meeting in Baltimore.

The plight of minority Christians will be the focus of "A Day of Prayer for Persecuted Christians" to be observed Nov. 26. The initiative was announced in July by the U.S. Conference of Catholic Bishops, along with "Solidarity in Suffering," a week of awareness and education on their situation starting Nov. 26.

"The solemnity of Christ the King is a fitting time to reflect on religious freedoms and persecution," said a joint statement Nov. 9 by Cantu and Cardinal Daniel DiNardo of Galveston-Houston, USCCB president.

Based on a report titled "Persecuted and Forgotten?" issued by Aid to the Church in Need in July, which covers the period of August 2015-July 2017, there appears to be a wall of hostility against Christians. In addition to Nigeria in West Africa, there is a contiguous line of nations cited in the report starting in Sudan, going to Eritrea and north to Egypt, then working its way through Saudi Arabia, Syria, Turkey, Iran, Iraq, Pakistan, India and China before winding up in North Korea.

Of those 13 countries, "the situation for Christians has declined," said the report, "as a result of violence and oppression. The lone exception was Saudi Arabia, it added, but only because "the situation was already so bad it could scarcely get any worse."

Cantu said at the news conference that "there are countries that fund and support" terror groups which target Christians in the affected area. One of them, Islamic State, has been losing its grip in the region.

"The defeat of Daesh (another name for Islamic State) and other Islamists in major strongholds of the Middle East offers the last hope of recovery for Christian groups threatened with extinction," the Aid to the Church in Need report said. "Many would not survive another similar violent attack."

The setbacks facing Christians are not limited to the countries in Aid to the Church in Need's report.

Last April, the Pew Research Center issued a report showing that the number of countries where Christians fell victim to government restrictions and social hostilities had grown from 108 in 2014 to 128 in 2015.

Another organization supporting persecuted Christians, Open Doors, said in its "World Watch Monitor Report" that covered 2016, "More than 200 million Christians in the 50 countries where it is most difficult to be a Christian experience persecution because of their faith." The Center for Studies on New Religions suggest the number is triple that.

One such example cited in the Aid to the Church in Need report was based in Sudan. "When the government removed the citizenship rights of people with origins outside the country," it said, "it sparked a massive exodus of Christians, who were forced to go to their ancestral homelands in neighboring South Sudan, in spite of having lived in Sudan itself for 30 years or more."

"It has often been said that Christianity can survive without the Middle East, but that the Middle East cannot survive without Christianity, because it is such an ancient presence and moderating influence in the region," Cantu said. Biblical accounts place the journey of Abraham from the Nineveh Plains in present-day Iraq to the birth of Jesus in the Palestinian Territories and the travels of St. Paul and the Apostles to spread the good news throughout the region.

DiNardo and Cantu cited a USCCB statement issued in February that said: "To focus attention on the plight of Christians and other minorities is not to ignore the suffering of others. Rather, by focusing on the most vulnerable members of society, we strengthen the entire fabric of society to protect the rights of all."

World | Persecuted Christians at risk of being forgotten, bishop says

The Francis Effect podcast: Advent, US bishops' meeting and martyrs of El Salvador