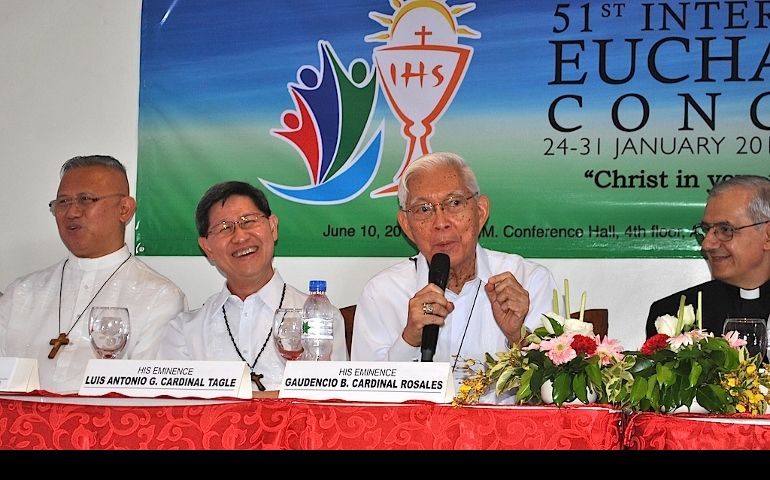 Retired Cardinal Gaudencio Rosales amuses fellow bishops, reporters with stories of his childhood impressions of the first International Eucharistic Congress held in the Philippines in 1937, which his mother took him to when he was 4 years old. (N.J. Viehland)

Manila, Philippines — The four Philippine cardinals who faced media last month drew the connection between everyday life and the 51st International Eucharistic Congress to be held in Cebu, central Philippines, in 2016.

The first International Eucharistic Congress held in the Philippines was in 1937.

Cardinals Orlando Quevedo of Cotabato and Luis Tagle of Manila, with retired Cardinals Gaudencio Rosales and Ricardo Vidal, at a June 10 press conference in the Manila archdiocese's chancery building helped launch the theme, logo, prayers and the song for the meeting, which will be held Jan. 24-30, 2016.

With nuncio Archbishop Giuseppe Pinto, they shared reflections on the meeting's theme, "Christ in you, the hope of glory." The cardinals and Archbishop Jose Palma of Cebu (chairman of the gathering), priests and lay partners answered media's questions, watched popular Philippine singer Dulce and her son sing the congress song and viewed videos, including a promotional video in which Tagle, Quevedo, media personalities, an actress and Congresswoman Grace Poe appear.

The International Eucharistic Congress is a church event where people from different parts of the world gather to celebrate the Eucharist, reflect its richness and pray before it. Aside from daily Mass celebration and other liturgy and sacraments, participants join workshops on various topics related to the Eucharist, special youth and children's day activities, cultural programs, and pilgrimages to various parishes in the Cebu archdiocese.

The congress has special meaning for Quevedo, whose archdiocese is located in Mindanao, southern Philippines, where government and Moro Islamic Liberation Front leaders are working to build an autonomous entity called Bangsamoro as a step to end decades of war.

"Because the Holy Eucharist is the memorial of the passion, death and resurrection of Christ, we know that Jesus is our savior, reconciler and peacemaker," Quevedo said. "We have great hopes in the Bangsamoro" for peace and development, he added.

Tagle in his reflection stressed that the congress theme is not about fleeting caprice and wishes. It is about hope, which he called "the deepest thing that defines a human being and society."

Pope Francis at the congress

After the press conference, Quevedo told reporters that before Francis had revealed his plan to come to the Philippines, Philippines bishops "were quite sure" the pope would be coming to the congress "because of his preferential love for those who are underdeveloped."

However, because the pope will visit the Philippines in 2015, "although our wishes and hopes are high, we have to be realistic in thinking that he cannot go to the same country in two succeeding years," Quevedo said.

"We cross our fingers," he added.

Earlier, he expressed his wish for the pope to visit Central Mindanao, where Cotabato is based. "I was simply wishing that perhaps for the Holy Father when he comes to the Philippines to visit [Typhoon Haiyan] victims he can have a side trip if his time allows to go to Cotabato City and perhaps push the peace process there," Quevedo said.

"After all, he already went to Palestine and gave a very good message not only in words, but also in gestures, calling for peace and reconciliation in the Middle East, particularly between the Palestinians and the Israelis," the cardinal told reporters.

He said if the pope is coming to visit disaster areas, there are also victims of man-made disasters. He wondered whether the Philippine government, groups in the Autonomous Region in Muslim Mindanao, Villegas, and the nuncio could help facilitate this.

A Vatican representative is expected to talk with the bishops about the planned papal visit when the Catholic Bishops' Conference of the Philippines gathers in July for their plenary assembly, Quevedo said.

He acknowledged "some risks and dangers" loom ahead with the congress coinciding with presidential and national elections.

"Government or the opposition will try to take advantage of that, but the church will be very careful in making sure that if politicians are actually invited, that they do not use that for their own advantage," Quevedo told reporters.

He reminded them that Rome will have a say on selection of speakers.

Msgr. Dennis Villarojo, general secretary for the 2016 congress, said organizers estimate there will be 5,000 international delegates and about 10,000 from around the country who will join catechesis sessions.

Another 50,000 to 100,000 people can join in other activities, such as open-air Masses and processions. About 1 million are estimated to join the closing Mass.

Villarojo said the event is open to all churches in Asia.

Quevedo shared his experience with the Federation of Asian Bishops' Conferences, a voluntary association of bishops' conferences in Asia that he headed for years. The federation went through Chinese bishops in Hong Kong and Taiwan to invite Chinese bishops to plenary and other assemblies. "We usually do not ask where they come from. We know that they are from very different types of groups, but they are very cordial and we welcome them with the hospitality of the federation," Quevedo said.