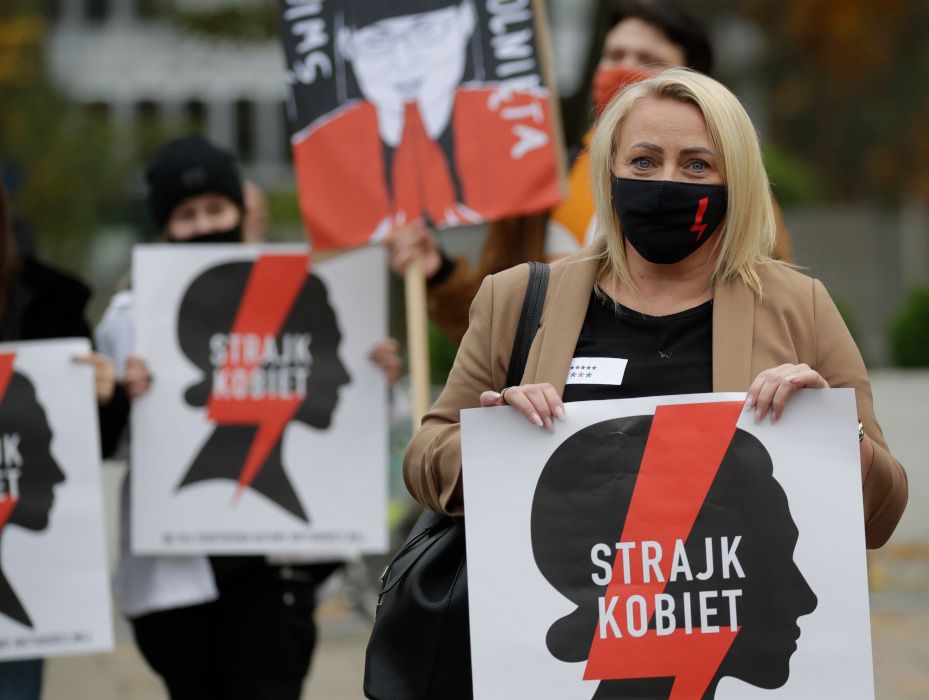 Women's rights activists with posters of the Women's Strike action protest against recent tightening of Poland's restrictive abortion law in front of the parliament building as inside, guards had to be used to shield right-wing ruling party leader Jaroslaw Kaczynski from angry opposition lawmakers, in Warsaw, Poland, on Tuesday, Oct. 27, 2020. Massive nationwide protests have been held ever since a top court ruled Thursday that abortions due to fetal congenital defects are unconstitutional. Slogan reads 'Women’s Strike'. (AP/Czarek Sokolowski)

Warsaw, Poland — People across Poland are vowing to stay off their jobs on Oct. 28 as part of a nationwide strike to protest a top court ruling that bans abortions in cases of congenitally damaged fetuses.

The nationwide strike comes amid a deepening standoff between angry crowds who have been taking to the streets over the ruling and Poland's deeply conservative government, which has vowed not to back down.

The constitutional court ruling Oct. 22 has triggered daily mass protests across this central European nation of 38 million that are exposing deep divisions in a country long a bastion of conservative Catholicism that is now undergoing rapid social transformation.

Rage over the ruling, which would deny legal abortions to women even in cases where a child is sure to die upon birth, has been directed at the Roman Catholic church and Jaroslaw Kaczynski, the ruling party leader and most powerful politician in the country.

Kaczynski accused protesters of seeking "to destroy Poland" late Oct. 27 and called on his party's supporters to defend churches "at any cost."

He spoke to a camera backed by Polish flags in an announcement that some critics compared to a notorious announcement of martial law in 1981 by communist leader Wojciech Jaruzelski to crack down on anti-regime protests.

Some saw his words as an incitement to violence, since the 71-year-old holds the job of deputy prime minister in charge of police and security services. 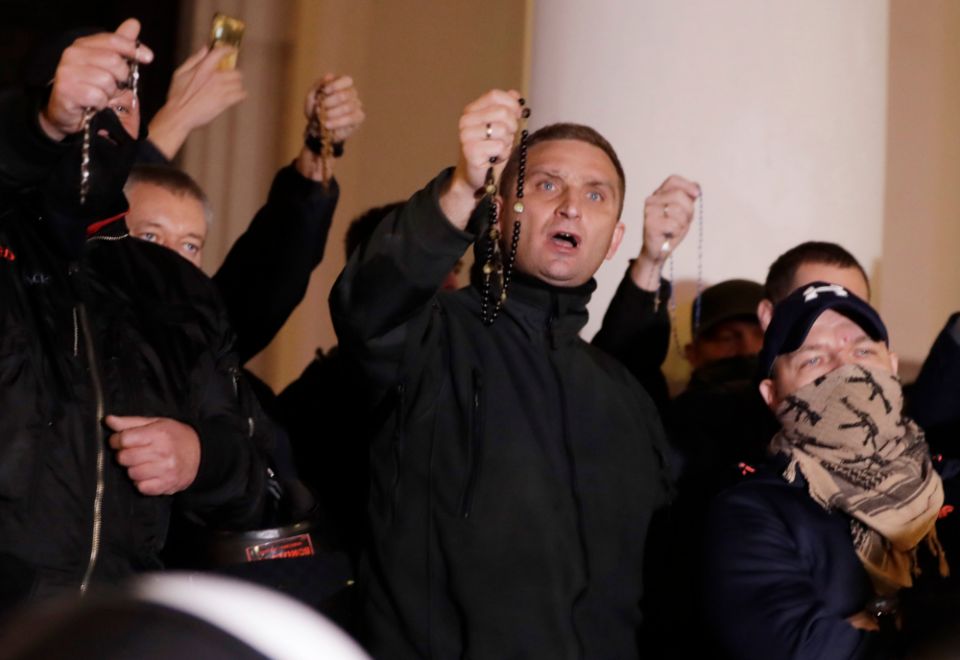 Far-right activists with rosaries sing a religious song as they block entry to a church against hundreds of women's activists and their supporters protesting for the fifth day against a court ruling tightening Poland's strict abortion law, in Warsaw, Poland, on Monday, Oct. 26, 2020. The court said it was unconstitutional to terminate a pregnancy due to fetal congenital defects, effectively banning almost all abortions. (AP/Czarek Sokolowski)

On Sunday, Oct. 25, members of some far-right groups and soccer fans surrounded churches to defend them, in some cases provoking skirmishes with protesters and police.

Szymon Holownia, the founder of a new centrist political movement, said that Kaczynski, "in the name of defending the Church wants to set fire to the country and drown it in blood."

Bartosz Weglarczyk, the editor of the news portal Onet, argued that Kaczynski was in effect giving permission to soccer hooligans and far-right extremists "to beat people in the streets."

Kaczynski, however, insisted it is the protesters risking lives by gathering in huge numbers amid a pandemic.

The conservative rulers are trying to depict the protesters as fascists.

"Left-wing fascism is destroying Poland," read a headline on state TV on Oct. 27.

Interior Minister Mariusz Kaminski on Wednesday vowed "decisive action" by the police "in the face of further attempts of similar acts of aggression and desecration announced by the leaders and organizers of the protests."

He said 76 people have been detained in connection to protests at churches, and prosecutors are carrying out proceedings in 101 cases.

People have been taking to the streets in massive numbers even as the coronavirus spreads fast, with a record 18,820 new cases and 236 new deaths over the past day.

Meanwhile, social tensions are also rising with ongoing protests by farmers, who are angry about the government's proposal of a new animal welfare bill that they say will harm them economically.

The Women's Strike, the key organizers of the protests over the past week, called the strike under the slogan: "We are not going to work."

Polish media report that some university classes have been called off, while the mayors of Warsaw and Krakow are also supporting the call for workers to stay off their jobs.