Pope calls for 'vigorous' Europe to stay true to its roots 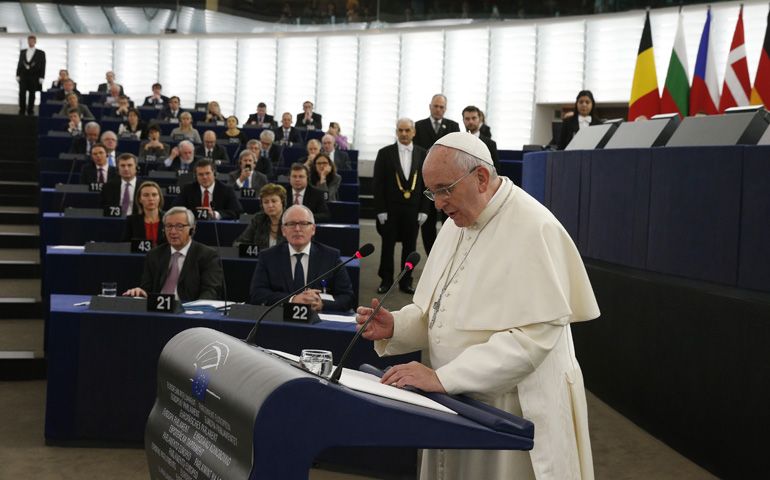 Pope Francis speaks during a visit to the European Parliament on Tuesday in Strasbourg, France. (CNS/Paul Haring)

Oxford, England — When the pope entered the packed chamber of the European Parliament on Tuesday, he was widely expected to reiterate the Catholic church's long-standing support for a united Europe.

But Francis also issued a rebuke for current attitudes and practices, leaving many members of the Parliament reeling at the force and vigor of his words.

"The pope is always frank and sincere, whether with church people or with politicians -- it's good he delivered such a strong message at this time of crisis," said Thierry Bonaventura, spokesman for the Swiss-based Council of Catholic Episcopates of Europe.

"His analysis of [the] situation is shared by many Europeans," he said. "But his aim, even so, was less to criticize than to recall the key principles the EU should uphold if it wishes to maintain a spirit of service and commitment to peace and justice."

The Argentine pontiff was in Strasbourg, France, at the invitation of the Parliament's German socialist president, Martin Schulz, who thanked him profusely for providing "orientation in times of disorientation."

It was the first papal visit to the EU's legislative branch since 1988, when Pope John Paul II famously invoked the spiritual unity of a still-divided continent and defended the right of subject nations in its communist-ruled east.

Yet it was clear from the outset that Francis hadn't just come to admire and praise.

"As the European Union has expanded, there has been growing mistrust on the part of citizens towards institutions considered to be aloof, engaged in laying down rules perceived as insensitive to individual peoples, if not downright harmful," he told his listeners.

"In many quarters, we encounter a general impression of weariness and aging, of a Europe which is now a 'grandmother,' no longer fertile and vibrant. As a result, the great ideas which once inspired Europe seem to have lost their attraction, only to be replaced by the bureaucratic technicalities of its institutions."

The pope said he wanted to offer a "hope and encouragement" by reliving the "ambitious political project" of the EU's post-war founding fathers.

But the EU's commitment to human rights and dignity had been threatened, he cautioned, by a view of human beings as "objects whose conception, configuration and utility can be programmed" and who could be "discarded when no longer useful, due to weakness, illness or old age."

A notion of individualistic rights had also taken root, he added, which took no account of any broader social context and risked becoming "a source of conflicts and violence."

He reminded European legislators they had a duty to "protect and nurture Europe's identity" by tending to the needs of individuals and people against a "throwaway culture and an uncontrolled consumerism."

This meant acknowledging the legacy of Christianity.

It also meant standing up for family life, education, human ecology and the rights of labor, speaking out for migrants when the Mediterranean Sea risked becoming a "vast cemetery" of boat people from Africa and the Middle East, and not allowing democracy to be eroded by "multinational interests" and "systems of economic power at the service of unseen empires."

"The time has come to work together in building a Europe which revolves not around the economy, but around the sacredness of the human person, around inalienable values," Francis said.

"The time has come for us to abandon the idea of a Europe which is fearful and self-absorbed, in order to revive and encourage a Europe of leadership, a repository of science, art, music, human values and faith as well -- a Europe which contemplates the heavens and pursues lofty ideals."

The pope's speech was broadly welcomed.

Gianni Pittella, who heads the Social-Democrat group holding second place in the 751-seat Parliament, said he believes its "tough and severe message" will remind Europe to put "human dignity and fundamental rights" first and fight harder against "discrimination, unemployment, fundamentalism and extremism."

Manfred Weber, whose larger conservative European People's Party holds 219 seats, said he thinks it will "take Europe to a new beginning, based not only on money and the economy, but first and foremost on ideas and values."

"Pope Francis reminded us that European values are rooted in Christianity -- it's our global responsibility to keep these values alive and make sure they're respected," Weber said in a statement.

"In these difficult times, when tensions are rising within and outside our continent, Europeans should not give in to fear of others and mistrust, but stand for peace, respect for human dignity, solidarity and the fight against poverty."

The EU has faced growing criticism for what many Europeans see as a "democratic deficit," which has enabled its unelected governing Commission in Brussels to extend power via decrees and directives within the 28 member-countries.

Crisis and dislocation in the Euro single currency have contributed to rising poverty and unemployment, currently averaging 20 percent across the continent.

Members of the European Parliament have also been criticized by the Catholic church for backing abortion, assisted suicide, same-sex marriages and embryo research, while Catholic bishops and aid agencies condemned plans in October to scale down the rescue of migrants and refugees in the Mediterranean, where hundreds drown each month attempting to reach Europe.

The pope repeated his critique of Europe's "throwaway culture" in a later address to the nearby Council of Europe, whose membership, now totaling 47 countries, has promoted human rights, democracy and the rule of law since 1949.

Tensions still existed in Europe, he said, in an apparent reference to the war in Ukraine, and a "great toll of suffering and death" was still being exacted.

Meanwhile, peace was threatened by "religious and international terrorism" as well as by human trafficking, "the new slavery of our age," against which Europeans needed "memory, courage, a sound and humane utopian vision."

'Where is your vigor?'

He listed two concepts -- multipolarity and transversality -- that should shape Europe's response to current issues and commended the Christian vision, with its dual emphasis of faith and reason, religion and society, as a corrective to both "religious fundamentalism" and a "reductive rationality which does not honor man."

"Where is your vigor? Where is that idealism which inspired and ennobled your history? Where is your spirit of curiosity and enterprise? Where is your thirst for truth, a thirst which hitherto you have passionately shared with the world?" Francis continued.

"Europe should reflect on whether its immense human, artistic, technical, social, political, economic and religious patrimony is simply an artefact of the past, or whether it is still capable of inspiring culture and displaying its treasures to mankind as a whole."

As expected, the pope's visit was protested by groups opposed to any religious presence in Europe's institutions.

A topless member of the feminist group Femen leapt on the altar of Strasbourg's historic cathedral Monday, and the leader of France's Left Party, Jean-Luc Mélenchon, defended his own country's "strict separation of the religious and political" and told French TV the European Parliament was "not a place for preaching."

However, presidents of the Council of Europe and its affiliated Parliamentary Assembly, Thorbjørn Jagland and Anne Brasseur, both welcomed the pope's defense of values and principles and pledged dialogue with the Catholic church.

With more than half of the MEPs (members of the European Parliament) newly elected in May and a new European Commission under Jean-Claude Juncker of Luxembourg now in office, there are hopes the pontiff's warnings and admonitions will have some impact.

On the day of the pope's visit, MEPs took part in a Strasbourg "human chain in solidarity with migrants" and voted to make eradicating poverty, fighting inequality and protecting human rights key to a new global development framework.

On Wednesday, Juncker presented a new 300 billion Euro ($375 billion) EU investment package to boost business and cut unemployment, while the EPP pledged to make "every effort" to apply the pontiff's advice in a range of areas.

"The semi-circle of the European Parliament had rarely been so full -- and so well-behaved," France's center-left Le Monde daily commented Wednesday.

"It was difficult to believe this was the same room, with the same faces, had earlier echoed to the usual murderous words between those wishing to destroy the union and those wishing to keep it alive. ... But the sovereign pontiff accompanied his 'encouragements' with an extended hand, bearing what he said were values held in common by Europe and the church."

He said he believes the pope's words will be "understood in a special way" by his listeners, which takes account of secularization and church-state separation, but also acknowledges the continued importance of religious faith and the Christian tradition to millions of Europeans.

"Francis didn't offer practical solutions to our problems -- church and state can no longer think and act together at this level," Bonaventura told NCR on Wednesday.

"But he did set out deeper principles and parameters which will be useful in tackling them, in which the human person must always occupy center-ground. If some parties and politicians now wish to use these in their work, that will be welcome."

[Jonathan Luxmoore is a freelance writer covering European church news from Warsaw, Poland and Oxford, England. His latest two-volume book, The God of the Gulag, will be published in 2015.]

Small islands are settings for big messages as Francis heads to Cyprus, Greece

Refugees. What to do?