Pope’s ‘blessing’ to lesbian no change in policy, Vatican says 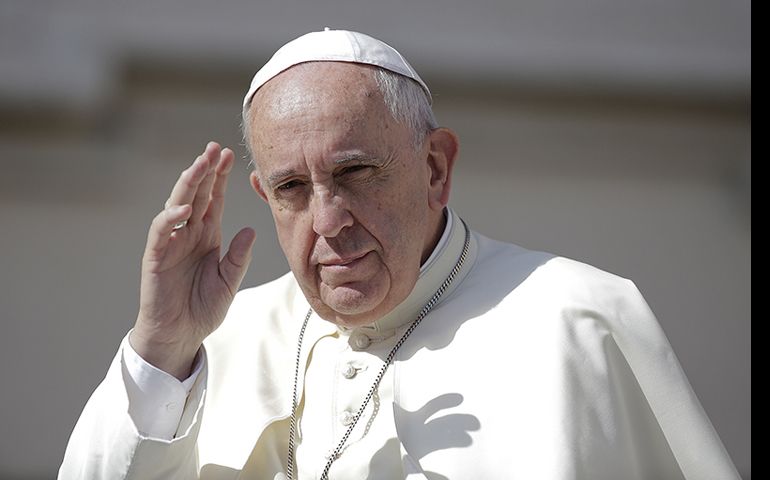 Pope Francis waves as he arrives to lead his Wednesday general audience in St. Peter’s Square at the Vatican on June 17, 2015. (Reuters/Max Rossi)

A lesbian author whose children’s books on gay families have been banned in Italy said she received a letter from Pope Francis that included a “blessing” of her work and relationship, but the Vatican says it’s being misinterpreted.

The courtesy letter to children’s author Francesca Pardi, with its generic blessing from the pope, does not signify a change in Catholic teaching, said a Vatican spokesman who played down the pastoral gesture.

“The blessing of the pope at the end of the letter was directed to the person, not at any possible teachings that are not in line with the doctrine of the church … which hasn’t changed a bit as the Holy Father has repeated even recently,” said the Rev. Ciro Benedettini, a Vatican spokesman, in a statement.

The church is opposed to same-sex relationships and considers marriage to be between a man and a woman. But Francis’ pastoral approach has often been misinterpreted in the mainstream press and many have speculated about whether it might signal a change in the church’s stance.

Pardi, who runs publishing house Lo Stampatello, said on social media on Aug. 28 that she had received a reply from the Vatican that included a papal blessing. The letter was written by a Vatican official on behalf of the pope. It wished Pardi “more fruitful activity in the service of young generations and the spread of genuine human and Christian values.”

Pardi’s books draw on social issues, including a series dedicated to exploring alternative family models, such as gay couples, adoption and single parents. The inclusion of same-sex families in some titles prompted the mayor of Venice, Luigi Brugnaro, to take a number of Pardi’s books out of schools. Those banned include Piccolo Uovo [Little Egg], in which an egg meets animals in different circumstances, including gay couples.

She said she was moved to send a letter and books to the pope after an event in Rome. The Family Day rally brought hundreds of thousands of people to the streets of the capital in June to protest same-sex families. Protesters said people in Italy are promoting gay relationships through what they termed “gender theory.” Pardi is in a same-sex marriage; she and her partner Maria Silvia Fiengo, married abroad, and the couple have four children.

Gay marriage and Catholic families will be at the top of the agenda when Francis visits the U.S. next month, during which he will visit the World Meeting of Families in Philadelphia. The trip also comes just before the Vatican hosts a synod in October, when church leaders will discuss doctrine on family issues.

Although some see Pope Francis as a “revolutionary” who will change church doctrines, his many pastoral gestures tend to be misinterpreted by those who take them out of a spiritual context, said the Rev. Thomas Rosica, English language assistant to the Holy See Press Office.

“The only revolution is a revolution of tenderness,” said Rosica on Aug. 28, at a national meeting in Philadelphia for religion reporters preparing to cover the pope’s trip.

Author hopes to trace 'an evolution of Catholic storytelling'