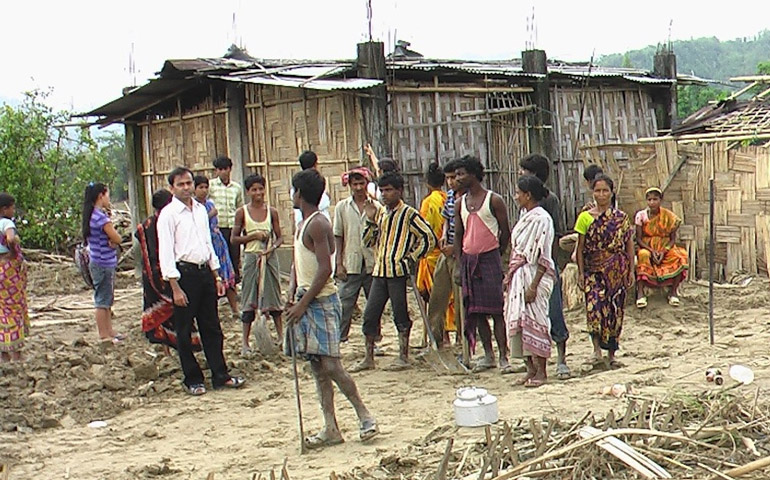 Toppo, the archbishop of Ranchi, appealed to all the religious orders "to become missionary again" at the recent Synod of Bishops on the new evangelization in Rome.

He asked whether religious men and women today were "working like the multinationals" and warned about the possibility of losing track of the primary purpose of religious congregations "to bring the Gospel to a lost world."

Fr. James Thayil, a priest of the Carmelites of Mary Immaculate in the Rajkot diocese in Gujarat, northwest India, and Fr. Ivan Vas, a Society of the Divine Word priest who served in the congregation's India Guwahati region, said while change is to be expected in modern and progressive Indian society, religious congregations in their country have acknowledged the need to innovate religious life. At their October national assembly, delegates from religious congregations of priests, nuns and brothers proposed to strengthen members' formation in mission and give priority to missionary endeavors, even if it means closing down ministries that are irrelevant.

Innovation is needed because religious life itself is in transition, and in trying to be relevant, congregations and their members must ensure they remain true to their charism, Thayil said. They must also keep the dynamism of mission alive. One model that has developed following Vatican II is that of messenger, he said.

"These missionaries witness to the presence of Jesus among people of other religions," and through their apostolic work, "proclaim Jesus' message of love" to people with no thought of baptizing them, he said. While the Indian Constitution guarantees freedom to profess, practice and propagate one's faith, various states have enacted anti-conversion laws.

Most religious orders run schools and health care services such as clinics and hospitals.

"Who do we serve and what kind of difference do we make concretely in terms of the mission or the Gospel?" Thayil asked.

Many congregations have become institutionalized and act as if religious life is just like any secular organization, he said. Priests and nuns get absorbed into the pastoral and administrative tasks of the church, Thayil said, and are not able to fulfill the original vision for which the congregation started.

Thayil said his Carmelite order has shouldered pastoral care and development of Rajkot diocese since it was established in 1977. He said Carmelites leave most of the diocesan positions to the 30 or so diocesan priests from other states who serve there with about 120 religious priests and 400 nuns.

He said he is thankful there is little friction between those diocesan and religious priests.

"In other dioceses, there is tension, more with regards the women religious," he said. "Most of the common issues concern ownership and running of institutions."

When priests develop the mission in a diocese and set up institutions and centers within it, the congregations "invest in every way -- personnel, money -- and some religious congregations initially do not see any difference between the diocese and the congregation and religious communities," Thayil said. "They later encounter problems with properties when the local church develops and the diocese would like to assume responsibility and ownership for the institutions and programs." He stressed this situation is not particular to India.

"Whose land is it, whose school is it? It becomes a problem," Thayil said.

Vas, who belongs to the world's largest Catholic missionary congregation, said missionaries used to build up centers and institutions then turn them over to the dioceses before starting again someplace else.

"This is not easy to do anymore these days because there is not as much donations to missions from Europe and other places as there was in the past," Vas said.

Being a missionary involves recapturing the religious person's identity as a disciple of Jesus in the modern world, Vas said.

He said Toppo's appeal is for a "radical discipleship that calls us to leave everything and follow the way Jesus lived as a young man," which is not happening today.

India's religious are "not lost, but we are looking, searching," he said.

"Not all congregations are suffering from multinational syndrome," he added. He cited efforts of fellow missioners from various congregations who go to isolated regions cut off from electricity, reliable transportation, communication, health and other services for basic necessities.

"Missionaries spend hours and hours on foot to reach the missions," Vas said.

He said priests, nuns and brothers in more developed dioceses and areas should be forming laity and giving key responsibilities to them, such as running schools, hospitals and other centers. Formation would enable laypeople to continue the religious congregation's mission.

"We need to be more a part of people's lives," Vas said. "In the Indian context, priest is 'guru,' and people go to him for spiritual well-being and upliftment.

"When people go to church, they want to see how the priest and religious [have] followed the Master, and they are waiting to hear or experience those testimonies," Vas said.

"She saw people without health care, without food, and she just started the work. Seeing this, people come for help, and also to help," Vas said. "No wonder that the Missionaries of Charity do not encounter problems with vocations and volunteers."