In South Africa, outrage gives way to acceptance of translations 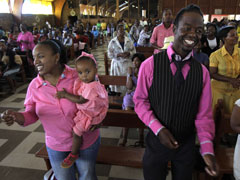 Editor’s note: This is one in an occasional series about the new missal translation that NCR will publish in the run-up to the translation’s official release in November.

CAPE TOWN, SOUTH AFRICA -- In South Africa, where the bishops’ conference mistakenly introduced the new Mass translations into parish use in late 2008, it seems that most Catholics have adapted to the new responses, although they wish it had not been necessary.

When the new responses in the Order of the Mass “were first introduced, it felt like an imposition,” said Fr. Marc de Muelenaere of St. John Fisher Church in the Pretoria archdiocese.

“No one likes the English -- it’s grammatically clumsy and many people view the changes as fiddling around for the sake of change,” he said in an Aug. 16 telephone interview.

“But we’ve become used to the new words and I’ve come to see the great controversies as a storm in a teacup,” de Muelenaere said.

Fr. Chris Townsend, communications officer for the Southern African Catholic Bishops’ Conference, said that the mistake the conference made in introducing the translations early “has turned out well, because South Africans have had a chance to be introduced to the changes gradually.”

Other approved texts of the Mass, such as the eucharistic prayers, will be implemented in South Africa in November, at the same time as the rest of the English-speaking world.

But Johannesburg-based Redemptorist Fr. Larry Kaufmann, who claims he gets a sense of what the laity are thinking through his travels around the country preaching missions and retreats, said the changes “offend the catholicity of the church” in that they are limited to the English-speaking world.

The rationale that the translations “will improve people’s participation in and love for the liturgy is, in my opinion, a myth,” Kaufmann said in an August e-mail. “It has made no difference. After the novelty has worn off, we just go back to doing things by rote.”

Kaufmann said he has been “scandalized by the heavy-handed attitude” to South Africa’s implementation of the translations.

“All the genuine, sincere and intelligent criticisms of the new translation have simply been ignored,” he said, noting that his “letter to the bishops urging a more pastoral and compassionate approach to this change was just ignored -- no acknowledgements even sent.”

In an earlier letter to South Africa’s national Catholic newspaper, The Southern Cross, Kaufmann said he had asked 50 liturgical ministers at a meeting in Johannesburg how they felt their parish liturgy could be improved.

“Every person except one said: ‘Go back to the old words of the Mass!’ ” he said, noting that the person who disagreed was a French-speaker who said he preferred the changes because they were closer to the French.

Benefiting from the fact that he rarely says Mass in English anymore is Mariannhill Fr. Casimir Paulsen, a Detroit priest who has worked in southern Africa for more than 40 years.

In Xhosa, the predominant language in Mthatha diocese where he celebrates Mass “three or four times every Sunday” despite being retired, the new response, “And with your spirit” (instead of “And also with you”), “doesn’t sound strange, like it does in English,” Paulsen said.

“So we’re not touched by the new translations, with their atrocious English. We’re the lucky ones,” he said. Mass is celebrated in local languages other than English in many parishes in the jurisdiction of the Southern African Catholic Bishops’ Conference, which includes South Africa, Botswana and Swaziland.

Gunther Simmermacher, editor of The Southern Cross, said the Cape Town-based newspaper was “bombarded with letters” when the translations were implemented but now receives very few on the topic.

“I think opinions are still strong but everyone’s had to adapt and people are used to the new responses,” he said. In the Cape Town archdiocese, “all but two priests signed a document saying they didn’t like the changes, but they went ahead and implemented them,” Simmermacher said.

In a December 2008 editorial, Simmermacher said almost all the letters the newspaper received regarding the new translations were angry. “None gave the revised version unqualified support. One correspondent, in a passage excised from the published version, went as far as writing: ‘I hate you, hierarchy.’ Feelings are running deep indeed,” the editorial said.

Responding to the editorial in a letter published in The Southern Cross, Bishop Kevin Dowling of Rustenburg expressed his “deep concern at the distress of the people who wrote in” to the newspaper.

“The critical letters only confirm what I have heard from other priests, religious and lay faithful,” the bishop said, noting that his initial reaction to “many of the proposed changes was that it was a purely arbitrary decision to demand that the English text had to faithfully represent the Latin in the first place, that many of the changes made no sense, and that some of the formulations were simply bad English.”

Distress has also been caused by the “literal cost of the changes,” de Muelenaere said. “Many Catholic families, who now need new missals, have struggled to bear the costs.” A Sunday missal costs the equivalent of U.S. 50 cents in South Africa.