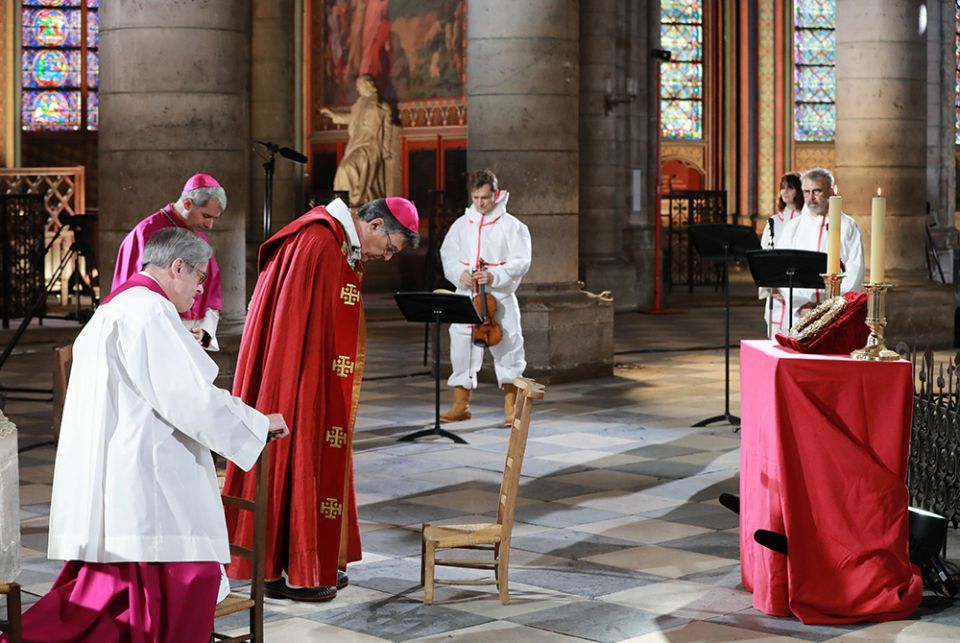 Jerusalem — Christians are commemorating Jesus' crucifixion without the solemn church services or emotional processions of past years, marking Good Friday in a world locked down by the coronavirus pandemic.

The chanting of a small group of clerics inside Jerusalem's Church of the Holy Sepulcher echoed faintly through the heavy wooden doors, as a few people stopped and kneeled outside to pray. The centuries-old church, built on the site where Christians believe Jesus was crucified, buried and rose from the dead, is usually packed with pilgrims and tourists.

Later, four monks in brown robes and blue surgical masks prayed at the stations of the cross along the Via Dolorosa, the ancient route through the Old City where Jesus is believed to have carried the cross before his execution at the hands of the Romans. It runs past dozens of souvenir shops, cafes and hostels, nearly all of which are closed.

In ordinary times, tens of thousands of pilgrims from around the world retrace Jesus' steps in the Holy Week leading up to Easter. But this year, flights are grounded and religious sites in the Holy Land are closed as authorities try to prevent the spread of the virus.

James Joseph, a Christian pilgrim from Detroit dubbed "the Jesus guy" because he wears robes and goes about barefoot, lives near the Church of the Holy Sepulcher year-round. On Friday morning, he had the plaza outside to himself. He said Good Friday has special meaning this year.

"The crucifixion is the saddest thing possible, and he felt what we feel right now," he said. "But thanks be to God. ... He rose from the dead and changed the world on Easter." 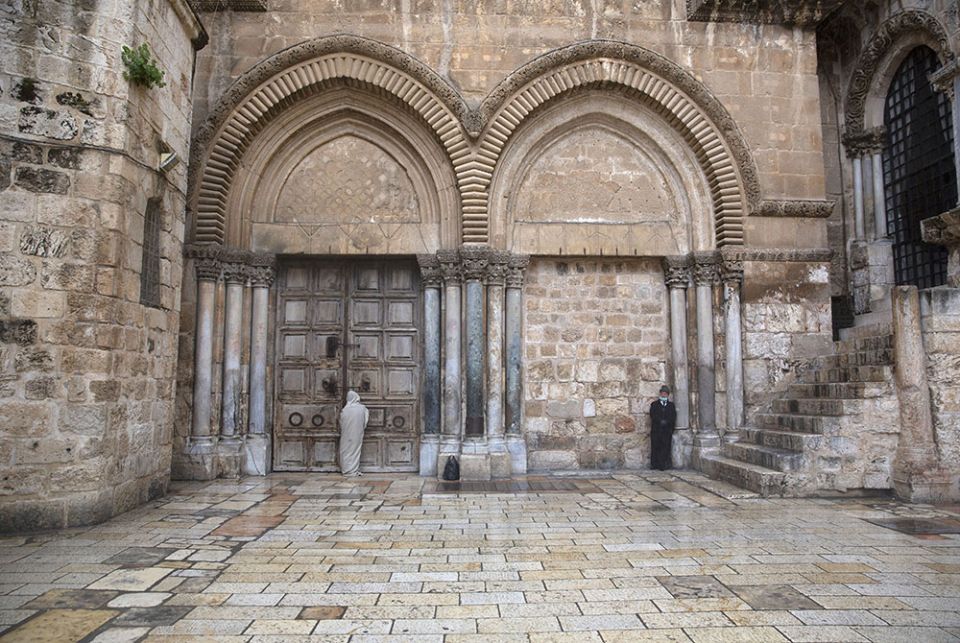 A Christian stands at the closed door of the Church of the Holy Sepulcher, believed by many Christians to be the site of the crucifixion and burial of Jesus Christ, in Jerusalem, Friday, April 10.

The new virus causes mild to moderate symptoms in most patients, and the vast majority recover. But it is highly contagious and can be spread by those who appear healthy. It can cause severe illness and death in some patients, particularly the old and infirm.

In Rome, the torch-lit Way of the Cross procession at the Colosseum is a highlight of Holy Week, drawing large crowds of pilgrims, tourists and locals. It's been canceled this year, along with all other public gatherings in Italy, which is battling one of the worst outbreaks.

The virus has killed more than 18,000 people in Italy and nearly 100,000 worldwide, according to data gathered by Johns Hopkins University.

Instead of presiding over the Way of the Cross procession, Pope Francis will lead a Good Friday ceremony in St. Peter's Square without the public.

Ten people — five from the Vatican's health office and five from a prison in Padua, in northern Italy, where infections are particularly widespread — will participate in the procession, which will circle several times around the obelisk in St. Peter's Square.

On display in the square will be a wooden crucifix, famed for being carried in a procession during the plague that ravaged Rome in the early 16th century. 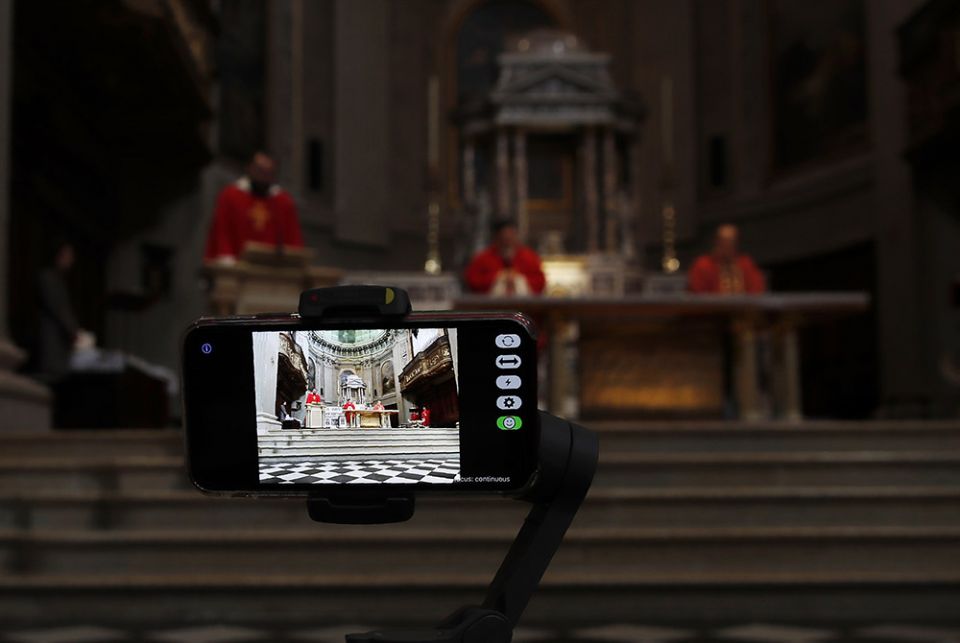 A smartphone films priests praying during the Passion of Christ Mass on Good Friday inside the Santissima Redentore church in Seriate, near Bergamo, one of the areas worst hit by coronavirus, Northern Italy, April 10. (AP/Antonio Calanni)

There will be no festivities this year, as the country battles an outbreak that has claimed more than 15,000 lives. Many churches are instead holding services online.

In Paris, a ceremony closed to the public was held in the charred and gutted interior of Notre Dame Cathedral, which was nearly destroyed by fire a year ago.

Archbishop Michel Aupetit and three other clergymen wore hard hats as they entered the damaged cathedral before taking them off for the ceremony. Standing before a large cross and beneath a gaping hole in the roof, they sang, prayed and venerated a crown of thorns that survived the flames.

The bishop said the ceremony, which was broadcast live, showed that "life is still here," even as the pandemic is "spreading death and paralyzing us." 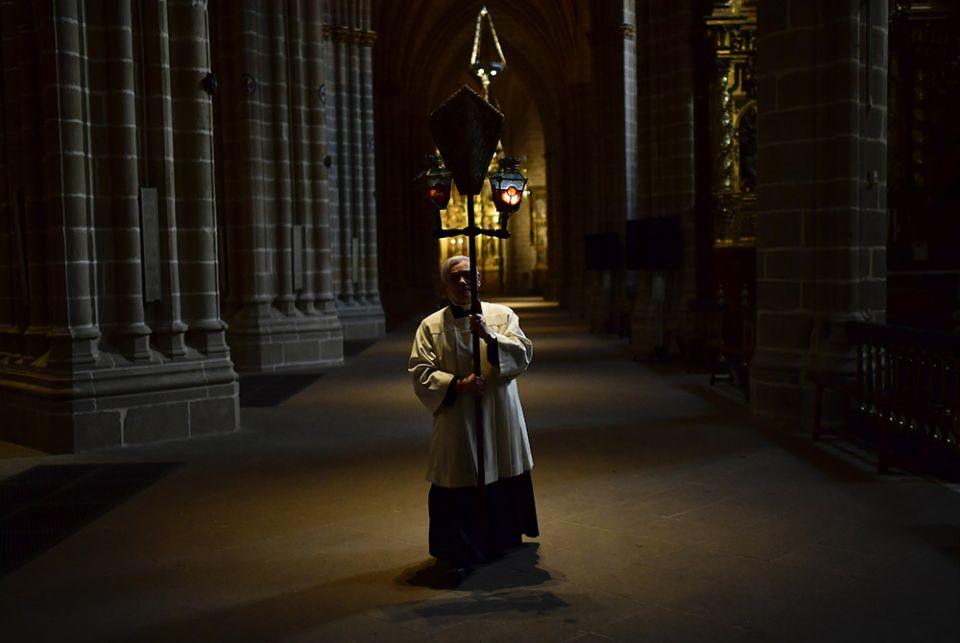 A priest walks during a Stations of the Cross, in an empty Santa Maria Cathedral during Good Friday after celebrations and services were cancelled due to the outbreak of coronavirus, in Pamplona, northern Spain, April 10. (AP/Alvaro Barrientos)

In Poland, priests at a Warsaw church took confession from the faithful in a parking lot, a measure taken for safety reasons during the pandemic. The government in the mainly Roman Catholic nation asked people to stay home Easter this year and follow Masses broadcast on TV or the radio.

In the United States, the Good Friday fast typically observed by Catholics was taken up by some in other denominations as a means to connect more deeply with their faith during difficult times.

"The savior himself declared that certain things go not out but by prayer and fasting," said Russell Nelson, president of The Church of Jesus Christ of Latter-day Saints, as he called for a worldwide day of fasting and prayer on Good Friday to help bring relief from the pandemic.

Members of the Utah-based faith widely known as the Mormon church normally go without food and drink one day a month in a practice they believe prepares people to receive God's blessings. They do it more often in times of crisis.

In the Philippines, Asia's bastion of Catholicism, churchgoers have been told to stay home and remember Jesus' suffering through family prayers, fasting and by watching Masses and religious shows on TV or online.

For Josille Sabsal, it's a test of faith. The 30-year-old Catholic missionary tried to replicate an altar in her Manila home by setting up a laptop, a crucifix and small statues of Jesus and the Virgin Mary on a table.

"It's different, because the priest is on a screen," she said. "When the internet lags, the Mass suddenly gets cut off and you have to look for another YouTube video."

"I miss that moment in church when you say, 'Peace be with you,' to complete strangers and they smile back," she said.

World | In a test of faith, Christians mark Good Friday in isolation

Artist illuminates Jesus' radical message in the Way of the Cross