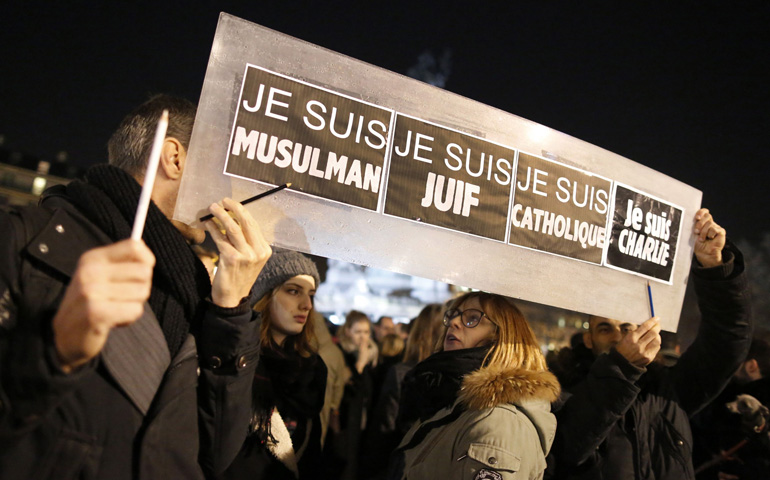 People hold a placard that reads, "I am Muslim, I am Jewish, I am Catholic, I am Charlie" at a Jan. 8 vigil in Paris. (CNS/Reuters/Jacky Naegelen)

Bernard Maris was a well-known economist, a teacher at Paris University and a frequent speaker on radio and television. He was also a friend, and he was slain with his colleagues at the French magazine Charlie Hebdo. We already miss him.

It is obvious that the murderers were aimed at cartoonists to punish them for some nasty drawings of Allah or Muhammad, but when you consider the list of the 17 people who perished Jan. 7-9, you realize that it reflects French diversity. True, among them were eight journalists, but also police officers, one of them a Muslim and the other a black woman, and six Jews.*

It appears that it was this diversity the three murderers wanted to strike down. In their mad frenzy, they tried to eliminate all kinds of populations they hated: journalists, but also police, Jews and some people, like Maris, who just happened to be there.

The reaction of the French society has been swift and impressive. On Jan. 11, 3.5 million people walked in the streets of Paris and other major cities, a significant percentage of the country's 65 million population, and the largest popular movement since the liberation of France in 1944.

However, once the communion of this extraordinary day is past, France, like most European countries, and maybe more than the others, faces intractable problems linked to its very diversity. A country that hosts the largest Muslim population, 5 million, and the most important Jewish community in Europe, 600,000 people, is bound to meet conflicts and misunderstandings.

The fact is that there are important political and religious minorities who do not live well with each other and do not accept the multicultural, multiethnic society that has dramatically changed the face of France during the last half century.

Observers have been impressed by the presence in every demonstration by members of the various religious denominations. One could see Catholic bishops walking with Protestant ministers, rabbis and imams, and listen to their messages of peace and hope. The national Catholic television program Jan. 11 included a successful roundtable with speakers from all denominations. However, these unanimous statements cannot hide the fact that all religions do not follow the same pattern and react in the same way.

Contrary to the Christian and Jewish confessions, the Muslim community does not have a proper hierarchy of clerics, except with its Shiite minority. In France, many imams are self-designated and have not followed a formal course of education. Those who speak with great courage in defense of democracy and freedom of speech are not always supported by their own public. There are thousands of mosques and prayer rooms in France, and there is a large variety of opinions debated in these places, where sectarian preachers can collect a wide audience.

A sure sign of uneasiness in the Muslim community was the sobering experience met by teachers when they started a discussion with their pupils about that tragic week. In many suburban schools, which host a majority of Muslim children, it was difficult to defend Charlie Hebdo, a publication well-known for its hostility to Islamism. If the best-educated, best-integrated Muslim citizens followed the majority and demonstrated in favor of free speech, an important minority stayed at home and silently disagreed with the condemnation of the three terrorists.

This minority found support in active social networks that use both Arabic and French and deliver hate messages and videos. In the absence of a comprehensive religious organization, the Muslim community is much more dependent on the Internet than other confessions are, and, as such, it is more vulnerable to demagogues and anti-Semites.

The other side of the picture is political. The lack of integration of a part of the Muslim population feeds a far right movement that is gaining votes and influence at each election. It did not escape observers that Marine Le Pen, the head of the extremist National Front, was the only political leader who refused to attend the big meeting in Paris, pretending she had not been properly invited to participate. She preferred to go to Beaucaire, a small southern city whose mayor belongs to her party. If you consider that the National Front collects 20-25 percent of voters in opinion polls, Le Pen's absence from a powerful meeting in favor of democracy is worrying.

One could hope that National Front voters would disapprove of the absence of their beloved leader. Unfortunately, it is unlikely. On the contrary, Le Pen's audience on Facebook has gone up since.

Once the euphoria of the mass demonstrations on Jan. 11 is over, France must think hard about the best way to help its citizens to live in common and accept each other. It is some comfort that the religious leaders are willing to pray together and in public.

However, the fact that the three criminals were born and educated in France shows that the mechanisms of integration don't work well with second-generation citizens. Schools are disorganized in many poor suburbs; prisons are efficient at transforming petty delinquents into hardcore Islamists; too many Muslim preachers lack a comprehensive French culture and even a proper knowledge of the Quran.

It is true that most European countries, such as Germany, the United Kingdom or the Netherlands, suffer from the same difficulties and are at pains to build up a new national identity. However, none of them has to handle such a huge Muslim population.

As is always the case in troubled times, the main danger is fear. The Jews are afraid of an environment getting more hostile, the white citizens want to get rid of the "Arabs," and the Muslims think, sometimes with good reason, that they are victimized. This unaccepted diversity is fertile ground for every kind of extremism.

It is a pity, for it should serve to enrich the various communities that make France a fascinating country. Let's hope that this tragic week will teach a significant number of citizens to act and start the necessary reforms.

*An earlier version of this analysis contained incorrect information.

[Antoine de Tarlé lives in Paris and is a regular contributor to the French Jesuit review Études.]

A version of this story appeared in the Jan 30-Feb 12, 2015 print issue under the headline: In France, the main danger is fear.