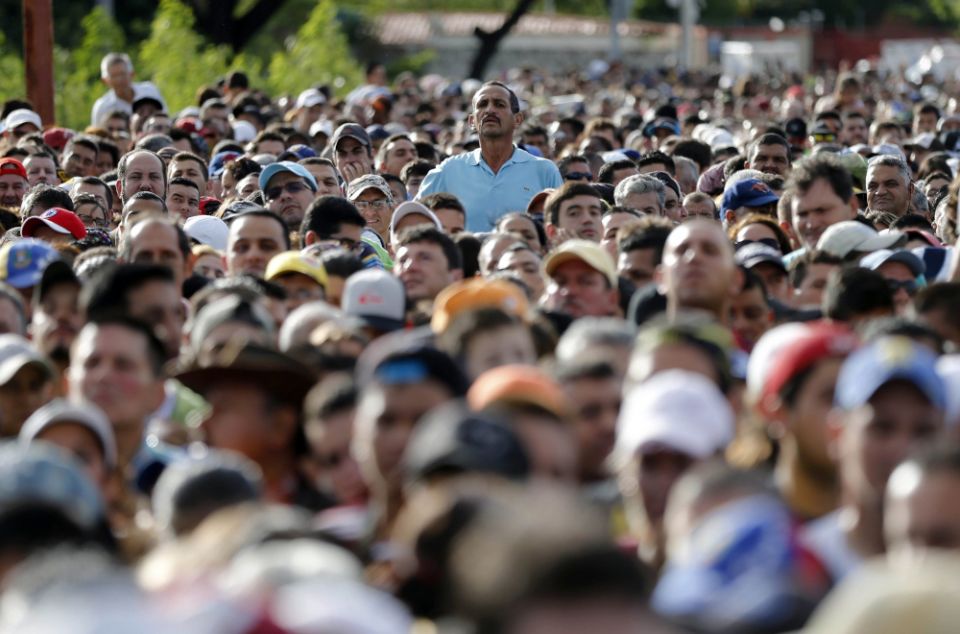 A Venezuelan man stands over the crowd waiting to cross the border into Colombia through the Simon Bolivar bridge in San Antonio del Tachira, Venezuela, on July 17, 2016. (AP/Ariana Cubillos)

Mormons, Baptists, Buddhists and other faith groups have stepped up their relief programs across Latin America, but for Catholic Church leaders, the flow of refugees has overwhelmed efforts to meet Pope Francis’ call to provide “hospitality and acceptance” for immigrants on his native continent.

Several Catholic congregations are devoted to immigration, such as the Scalabrini International Migration Network. “Other groups, among them the Jesuits, Franciscans, the Caritas organizations and some national conferences of bishops, are working hard on this issue,” said Fr. Paolo Parise, leader of Missão Paz (Mission Our Lady of Peace), a welcome center in São Paulo for migrants and refugees.

“But, as a whole, the church still needs to wake up to this reality and follow the rhythm of the pope,” Parise said.

On World Youth Day in January, Francis pressed the bishops of Central America in Panama on the region’s most urgent social issues, including migration.

“‘Welcoming, protecting, promoting and integrating’ can be the four words with which the church, in this situation of mass migration, expresses her motherhood in the history of our time,” the pope said. 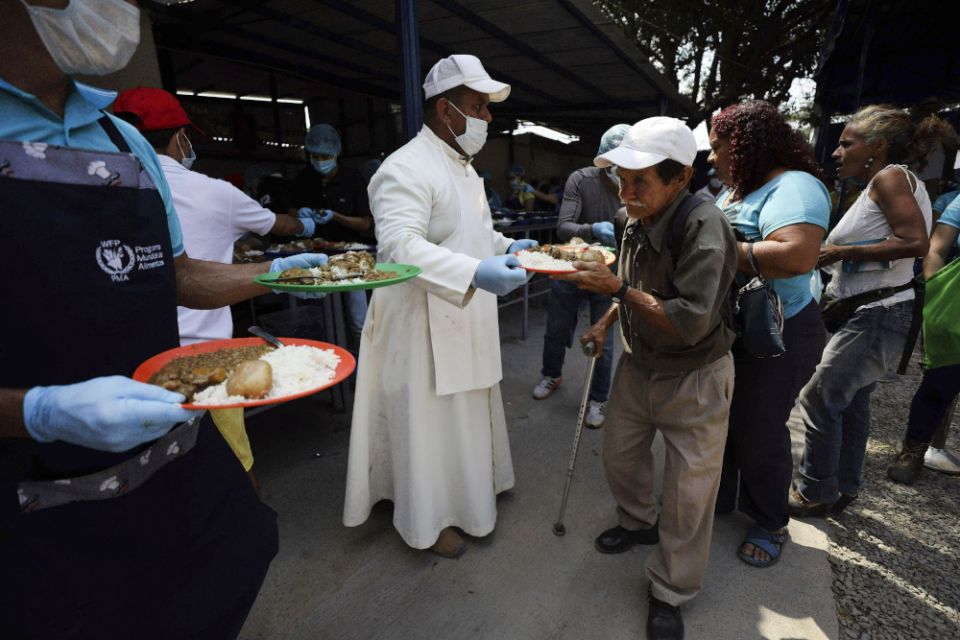 The Rev. Richard Garcia hands out free lunch to Venezuelan migrants at the Divina Providencia migrant shelter in La Parada, near Cucuta, Colombia, on the border with Venezuela, on Feb. 11, 2019. (AP/Fernando Vergara)

In the past few years, the region has seen waves of mass migration. In 2010 a major earthquake hit Haiti, bringing hundreds of thousands of desperate immigrants to South America, especially to Brazil. Now Venezuelans are fleeing President Nicolás Maduro’s unsteady regime, looking for both work and calm, as caravans of Central Americans head north to the United States.

Analysts estimate that 100,000 Venezuelans have taken up residence in Brazil, most of them since 2017, fleeing turmoil in their home country. At Missão Paz, 3,000 miles from the Venezuelan border, 29 of those seeking refuge are from Venezuela, constituting the biggest national community among the 17 nationalities currently represented there.

According to Bishop Mário Antônio da Silva of the Diocese of Roraima, which borders Venezuela, the situation reached a breaking point last summer. “In August there was an enormous tension on the border. Many Venezuelans were living on the streets without a shelter. Violence exploded, with regrettable xenophobic incidents. We followed the situation with great concern and tried to pacify it,” said Silva. 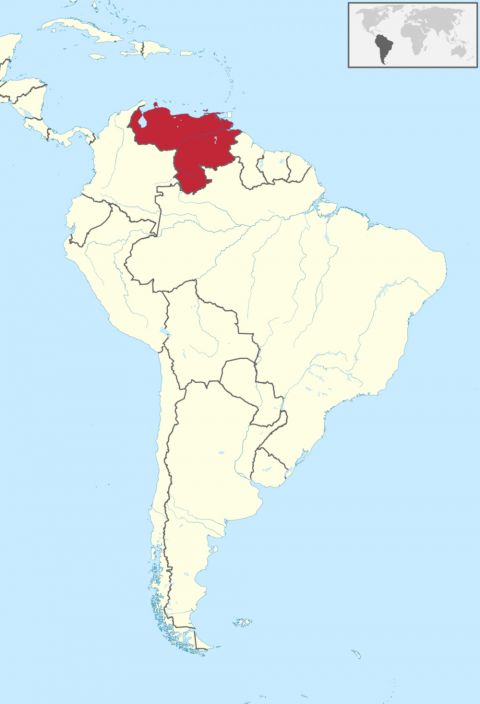 Venezuela, red, is located on the northern coast of South America. (Creative Commons)

Fifty thousand Venezuelans now live in Roraima, the northern Brazilian state, out of a total state population of about 600,000.

Silva said the diocese offers free breakfast to 700 people daily, besides giving many of them clothes, shelter and medical assistance.

Last year, the National Conference of Brazilian Bishops decided that 40 percent of donations received for the Campaign for Fraternity, a Lenten drive, would be directed to the Diocese of Roraima to fund a monthly benefit paid to migrant families.

“But it’s not enough,” Silva said. “We have to help too many people and we’re operating at full capacity. There is no Plan B.”

At least 1.5 million people have crossed from Venezuela into Colombia, with half of them continuing to Ecuador, Peru, Chile and Argentina.

The Catholic diocese in the border city of Cucuta has opened a 30,000-square-foot refugee center with sanitary facilities. In its local parishes the diocese has created eight restaurants that serve 10,000 hot meals each day. The Scalabrinians also established a migration center with 180 beds, which accommodates people for up to five days.

Cucuta Bishop Victor Ochoa Cadavid says he counts on 800 volunteers, with donations coming from the Archdiocese of Miami, the U.S. Conference of Catholic Bishops’ Secretariat for Latin America, Caritas, the U.N. High Commissioner for Refugees and the U.S. Agency for International Development.

But it’s not enough. “They arrive hungry and many times ill. We try to be a field hospital for them, as the pope told us to be.

“We’re not able to do more than we already do, honestly,” said the bishop, who said that refugees are getting assistance in the area from Baptists, Mennonites and Jewish groups as well.

Silva and Ochoa make an extra effort to offer spiritual assistance in addition to humanitarian help. In Roraima, the diocese celebrates Masses in Spanish and Warao, the language spoken by an indigenous people from the borderland. In Cucuta, the church organizes activities to help Venezuelans settle in the city.

At Missão Paz, in São Paulo, the migrant center offers Portuguese classes, legal advice, medical and psychological assistance and professional education. It also offers Masses in Italian, French, English and Spanish. In the past year, some 7,000 Haitians, Africans and South Americans have taken advantage of its services and 26,000 people make use of its spaces.

“São Paulo is a microcosm of what happens in Brazil. We traditionally welcomed Bolivians and Paraguayans, but the Haitians became a majority since the earthquake,” said Parise.

Moise Dezil is one of them. He was in class when the earthquake destroyed the university building where he was, killing all of his classmates. After migrating to Brazil, “I was welcomed at Missão Paz and it became my home and my family. Here I learned my first words in Portuguese, married and started working,” he said.

Dezil, now a teaching assistant at Missão Paz, attends Mass in French with the Haitian community every second Sunday. “My 6-month-old son was born in Brazil and I want to be here with him forever. It’s a wonderful country that welcomed me.”

The Rev. Martin Islas, a priest who has worked for two years in a parish in Chiapas, Mexico, close to the border with Guatemala, has seen few happy stories like Dezil’s.

A few months after Islas assumed the parish of San Fernando de Guadalupe in 2017, the first massive caravans from Central America started to arrive. “Most of them are young men in their 20s or even younger, born in the countryside, with no formal education. They’re escaping the gangs that charge them a ‘peace tax’ back home. But they’re followed by (the gangs) the whole march. They’re kidnapped, extorted, enslaved. And they only think on getting to the United States,” he said.

Many of those dreaming of getting to the U.S. have died on the train to the North, known as “La Bestia” — The Beast. One, he said, was a pregnant 24-year-old woman from Honduras. “She was not able to hold firmly and fell from the train. It shocked everybody.”

Islas estimates that as of March 2019, some 10,000 migrants have passed through his parish.

Migration, Islas said, is simply too big a problem for the church to deal with.

“It’s an international issue. It’s not a problem only in Latin America,” he said. “People arrive with hunger, with diseases and a lot of pain, and they need an immediate response. Sometimes you just can’t help them. You can’t plan any activity, because the train arrives and everybody runs to take it.”

The pope praised him for providing for his parents; now Texas may want to deport them