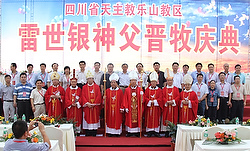 Bishop Paul Lei Shiyin, holding crosier on right, poses with other clergymen after being ordained bishop of Leshan, China, Jun 29. Bishop Lei was ordained without a papal mandate at Our Lady of the Rosary Church in Emeishan, reported the Asian church new s agency UCA News. (CNS photo/courtesy Diocese of Leshan, UCAN)

VATICAN CITY -- When China’s state-run Catholic Church ordained a new bishop for the Diocese of Shantou last July 14 without the Vatican’s approval, it represented the latest step back from years of progress in a complex relationship.

Yet the main causes for the shift may have little to do with Rome, experts say, and instead lie in momentous geopolitical events in other regions of the globe, and deep social changes within China itself.

For more than half a century, China’s 12 million to 15 million Catholics have been divided between the officially approved Chinese Patriotic Catholic Association (CPCA) and an “underground” church of Catholics loyal to the pope. Each side fiercely rejects the other’s legitimacy.

But in recent years, the Vatican and Beijing have been in engaged in a slow and gradual process of compromise and mutual accommodation.

In 2007, Pope Benedict XVI wrote an open letter to Chinese Catholics insisting that the church be free of state control but said the Vatican would like diplomatic ties with Beijing. He also added that Rome is not seeking the overthrow of the communist regime.

The following year, in a widely noted gesture, the China Philharmonic Orchestra performed for Benedict at the Vatican in the presence of Beijing’s ambassador to Italy.

Most significantly, China and the Vatican tacitly agreed on a policy of ordaining only bishops acceptable to both sides. Some 90 percent of those bishops previously ordained by the state church eventually received approval from Rome.

Over the last eight months, however, the rapprochement has halted, and Beijing has once again taken a hard line on control of the church in China.

Last November, Joseph Guo Jincai was ordained the bishop of Chengde without papal approval. Last month, a CPCA spokesman said the state-run church planned to ordain more than 40 new bishops “without delay,” a week before it ordained Rev. Paul Lei Shiyin as bishop of Leshan.

According to the Vatican-affiliated AsiaNews agency, Chinese officials first “kidnapped” three bishops loyal to Rome and forced them to participate in the ceremony that made the Rev. Joseph Huang Bingzhang the bishop of Shantou.

So what changed that would explain Beijing’s recent shift in policy?

According to the Rev. Bernardo Cervellera, director of AsiaNews, China’s new hard line is a reflection of both strength and weakness. With its status as an economic superpower now indisputable, China no longer has to cultivate the good opinion of Western nations that are literally in its debt.

“There may have been a time before the (2008 Beijing) Olympics when China may have thought it needed the Vatican’s approval for international respectability,” Cervellera said, “but now it doesn’t.”

Despite its growing assertiveness abroad, Cervellera said, Beijing is increasingly anxious about unrest among its own people. Along with skyrocketing growth, China has wrestled with inequality, corruption and environmental damage. That makes the regime even more determined to defuse any potential source of organized resistance, including the Catholic Church.

According to Raquel Vaz-Pinto, a professor of international relations at the Catholic University of Portugal, Chinese leaders have especially keen memories of Poland in the 1980s, when Pope John Paul II inspired the Solidarity labor movement that toppled the communist regime and later decimated the Soviet Union.

Within a month, she noted, the state church defied Rome with the ordination in Chengde.

The timing wasn’t a coincidence, Vaz-Pinto said, nor were two more ordinations that followed the “Arab Spring” of pro-democracy movements in the Arab world, which brought down the longtime dictators of Tunisia and Egypt.

China’s fear that the Arab movements could inspire dissidents on its own soil is evident in what Phelim Kine, senior Asia researcher at Human Rights Watch in New York, called the “worst spike in repression in China since the aftermath” of the 1989 Tiananmen Square protests.

Since last February, authorities have arrested an unknown number of activists, intellectuals and bloggers, and heavily censored international news.

“The spillover effect of this is touching all sectors of society,” Kine said, including the Catholic Church, where underground clergy already have a long history of being imprisoned and tortured.

As a result, the Vatican seems to have lost faith in engagement and negotiation with Beijing, opting for an increasingly hard line of its own, even though its leverage is mostly verbal.

The Vatican has warned that all bishops who consecrate other bishops without a papal mandate incur automatic excommunication, as do the men they consecrate, unless they were “coerced” to participate in the ceremony.

Even stronger have been recent statements by Cardinal Joseph Zen, the retired archbishop of Hong Kong and Pope Benedict’s top adviser on China. Last week, Zen took out an advertisement in a Hong Kong newspaper denouncing those who use “violence to assist scum inside the church to force bishops, priests and followers to do things against their consciences.”

Vaz-Pinto assumes such language bears the tacit endorsement of the pope himself.

“If (Zen) didn’t think he was supposed say those things,” she said, “he wouldn’t be saying them.”

What moral theologians say about getting involved in Syria

How faith is lived: Website offers window into Catholicism around the world

Seal of confession a topic of debate after French abuse report