Skip to main content
News
Vatican
This story appears in the Francis in the United States feature series. View the full series. 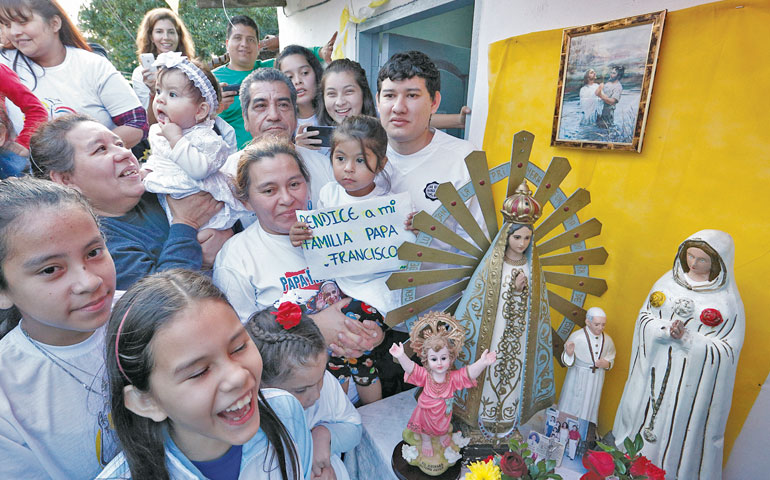 Those looking for clues of what to expect from Pope Francis when he visits Cuba and the United States at the end of September should study his trip to Latin America.

Francis' eight-day trip to Ecuador, Bolivia and Paraguay July 5-12 accentuated almost every theme of this pontificate. At a large prison in Bolivia, he told the prisoners, "I could not leave Bolivia without seeing you." He went to a riverside barrio in Paraguay, and appeared more energized from that encounter than the formal, diplomatic airport welcoming ceremonies in the three countries he visited. In Ecuador, he reiterated some of the central themes of his encyclical on the environment and, in another signature sign, when speaking to clergy and religious, he set aside his text and spoke without notes for 30 minutes.

Even the seemingly remote subject of curial reform was evident in the trip: His entourage was slimmed down and he was accompanied by only one Vatican cardinal.

The keynote address of the trip, when Francis met with community organizers from around the world in Santa Cruz, Bolivia, July 9, is already being called a "mini-encyclical." Francis was unrelenting in his criticism of contemporary capitalism. After listing many of the ills of modern society, he said, "And behind all this pain, death and destruction there is the stench of what Basil of Caesarea, one of the church's first theologians, called 'the dung of the devil.' An unfettered pursuit of money rules. That is the dung of the devil."

This is strong language that cannot be effectively spun or trimmed by the pope's American critics.

Francis challenged Christians to do more than "mere philanthropy" in addressing social inequality. "Working for a just distribution of the fruits of the earth and human labor is not mere philanthropy," he told the crowd. "It is a moral obligation. For Christians, the responsibility is even greater: It is a commandment."

None of this is a dramatic departure from what we read in Evangelii Gaudium, the apostolic exhortation Francis released in November 2013. What was new, however, was that he specifically called on community organizers to get busy with the fight for justice, and to work for structural change.

Joseph McKellar of the Jesuit-founded community-organizing network PICO was one of four PICO-affiliated organizers who attended the World Meeting of Popular Movements at which Francis delivered his scorching talk. "It's clear that grassroots organizing is very close to Pope Francis' heart and that he sees working for structural change to advance justice as a key dimension of our Catholic faith," McKellar told NCR.

The times they are a changin'. Only a few years ago, it was unclear if the Catholic Campaign for Human Development, the community-organizing arm of the U.S. Conference of Catholic Bishops, was even going to survive the attacks launched on it by conservative Catholics who were distressed that some of the groups the campaign collaborated with did not share each and every article in the church's teachings on sexual morality.

Now, you have the pope not only addressing community organizers, but identifying himself with their work.

Anthony Annett, who works at the Earth Institute at Columbia University, thinks the pope was not only speaking to the people in the room, but to his critics, many of whom come from the U.S. and are dreading the pope will say similar things when he comes here in September.

"This speech isn't meant to be an answer to the pope's critics, but it might as well be," Annett said. "The pope's American critics frequently distinguish virtuous American capitalism from its vicious Argentinian kind. Francis says that, lest he avoid any misunderstanding, the problems engendered by the current economic system -- exclusion, inequality, environmental destruction -- are global in nature, and affect humanity as a whole. If this was not blunt enough, he rails a new colonialism under the influence of mammon, which now restricts freedom and sovereignty."

House Speaker John Boehner, who will host the pope when he addresses the U.S. Congress in September, must be questioning if it was such a good idea to invite him in the first place.

"Another common position of the critics is that the global market economy simply needs a bit more honesty and a strong rule of law to achieve virtuous outcomes," Annett adds. "Francis thinks otherwise. Over and over again, he denounces the whole system, which -- from its 'bondage of individualism' and 'mentality of profit at any price' -- hurts the Earth and denies millions of our brothers and sisters their basic rights. This system runs counter to the plan of Jesus, says Francis. Can it get much clearer than that? And because the problem is a problem with the system, real change must be structural change. The system is rotten. It is an economy that kills. And so change is urgent."

The pope's words reached beyond the Catholic universe too. Damon Silvers is the director of policy and special counsel at the AFL-CIO and he is not a Catholic. He told NCR, "The pope's talk was just astounding. I couldn't recall any leader of any religion in my lifetime speaking so plainly about economic justice and how that is at the core of how we human beings are supposed to treat each other."

If the pope were merely to recite words similar to those he delivered in Bolivia to the community organizers, he would certainly not get the kind of universal accolades he garnered in Latin America. But Francis' trip was not only about his words, but his gestures.

Seeing him embracing as many poor people and as many children as he could, the way he lights up and comes alive when he walks through a barrio, and even more the looks on the faces of the people who encounter him -- these powerful, evocative images will resonate in Brooklyn and Peoria as much as they did in Bolivia and Paraguay.

People sense that the pope is on fire, not with an economic critique per se, but with the Holy Spirit, and that the economic critique comes not from time spent reading but from time spent praying. His joyful embrace of the poor may be a reproach to some, but it surely puts all who see it in mind of Jesus of Nazareth, in a way we have not seen in a pope in centuries. It is not just the pope's words, but his evocation of the Word that we witnessed in Latin America.

In September, we will see how that plays in the United States.

A version of this story appeared in the July 31-Aug 13, 2015 print issue under the headline: Will pope's strong message meet resistance in US?.