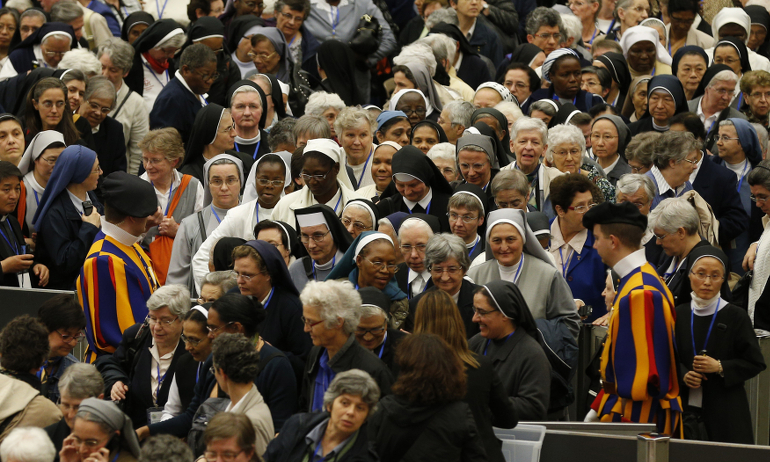 The heads of women's religious orders leave an audience with Pope Francis at the Vatican in 2016. (CNS/Paul Haring)

The heads of Catholic religious orders around the world apologized to clergy abuse survivors Feb. 19, acknowledging in a rare joint statement that orders habitually denied accusations in the past and covered up for abusers.

Writing as "the Major Superiors of Religious Orders and Congregations around the world" days before Pope Francis' global summit on clergy sexual abuse gets underway, the groups likewise called on the Feb. 21-24 meeting to create "structures of accountability" in the global church.

"We have learned that those who abuse deliberately hide their actions and are manipulative," they said. "Our shame is increased by our own lack of realization of what has been happening."

"We acknowledge that when we look at Provinces and Regions in our Orders and Congregations across the world, that the response of those in authority has not been what it should have been," the continued. "They failed to see warning signs or failed to take them seriously."

The upcoming three-day summit on child protection is the first of its kind. Francis has called all the presidents of the world's bishops' conferences to the Vatican for the event.

Also attending the encounter will be 12 representatives of men's religious orders and 10 from women's orders, including the heads of both umbrella groups: Venezuelan Jesuit Fr. Arturo Sosa, who also leads his order, and Maltese Sr. Carmen Sammut, who also leads the Missionary Sisters of Our Lady of Africa.

The umbrella groups do not usually issue statements together. A spokesperson for the international union did not immediately know whether they had ever done so in the past.

The Feb. 19 statement acknowledged that a familiar atmosphere often found within religious orders can "make it harder to condemn and expose abuse."

"It resulted in a misplaced loyalty, errors in judgment, slowness to act, denial and at times, cover-up," said the leaders, adding: "We still need conversion and we want to change."

"We want to act with humility," they continued. "We want to see our blind spots. We want to name any abuse of power. We commit to engage in a journey with those we serve, moving forward with transparency and trust, honesty and sincere repentance."

Speaking directly to clergy abuse survivors, the leaders stated: "We acknowledge that there was an inadequate attempt to deal with this issue and a shameful lack of capacity to understand your pain."

"We offer our sincerest apologies and our sorrow," they stated. "We ask you to believe in our goodwill and in our sincerity. We invite you to work with us to put in place new structures to ensure that the risks are minimized."

Organizers of the upcoming three-day summit characterized the encounter as an opportunity for bishops and superiors to learn about their responsibilities in dealing with abuse during a Feb. 18 briefing.

Chicago Cardinal Blase Cupich said that the pope "wants to make very clear to the bishops around the world, not only the ones participating, that each one of them has to claim responsibility and ownership for this problem."

"There's going to be every effort to close whatever loopholes there are, to make sure that people understand, on an individual basis as bishops, what the responsibilities are," said the cardinal.

In their statement, the heads of religious orders noted that three days is a short amount time.

"However, we believe that with the winds of change blowing through our Church and with goodwill on all sides, important processes and structures of accountability can be started and the ones already in place can be supported," they stated.

"New steps forward can be imagined and decisions can be made so that implementation can follow speedily and universally with proper respect for different cultures," they continued. "The abuse of children is wrong anywhere and anytime: this point is not negotiable."