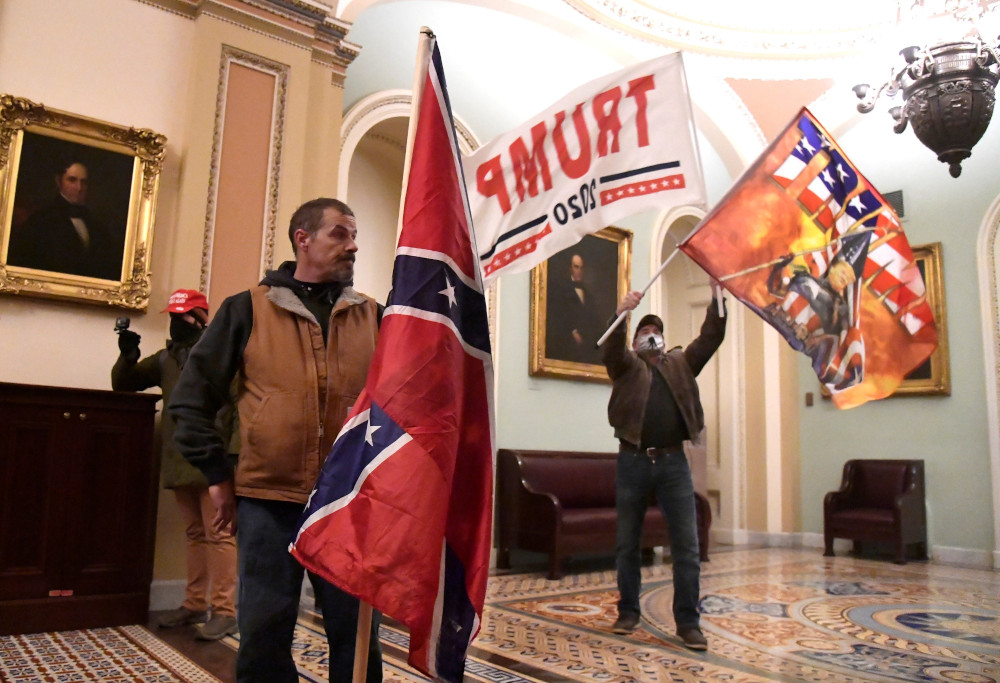 As the U.S. Capitol was taken over by insurrectionists on Jan. 6 seeking to disrupt the certification of the Electoral College votes to formally declare Joe Biden the winner of the presidential election, a number of Catholic bishops took to Twitter to call for prayer and peace, with a few specifically condemning the siege of the Capitol by a violent mob.

"Today's events show the immensely perilous pathway of division and polarization that our country has embarked upon in these past four years," San Diego Bishop Robert McElroy told NCR.

"We need to begin immediately a moral and spiritual regeneration in the public and political realms that touches the hearts of Americans and helps us all to see through the prism of this terrible assault on our democracy," he added, saying that the country must embrace dialogue over division as it seeks to move forward.

Unlike some Catholic leaders in recent weeks who have said President Donald Trump's refusal to accept the election results did not pose a threat to democracy, McElroy did not mince words at identifying what he sees as the root cause of the day's events.

"We must be clear in identifying this moment as the logical trajectory of the last four years of President Trump's leadership of our country and stare in the face how we have stood by without giving greater witness to the terrible danger that leadership rooted in division brings to a democratic society."

"Today we see the face of insurrection in the United States in a way that we have never witnessed in the last hundred years," said McElroy. "It is ugly and calls us to action."

Over the last six weeks, some right-wing Catholics have joined forces with evangelicals in rejecting the election outcome. In December, when protestors rallied in Washington, D.C. calling for the Supreme Court to throw out the election results, they were joined virtually by a disgraced former Vatican archbishop and a Texas Catholic bishop, along with in-person appearances from several priests and prominent Catholic pro-life activists.

Cardinal Joseph Tobin of Newark, New Jersey, told NCR that the scenes of rioters attempting to overtake the nation's capital were "not surprising."

"I'm not shocked, I'm just more saddened by what I see," said Tobin.

"It's the fruit of long and progressive polarization in American society," he said, adding that polarization trumps "faith, it trumps the rule of law and it trumps science."

He said that he was particularly disheartened that this was unfolding during a pandemic, at a time when the nation should be seeking to come together.

"It shows just how bad things have gotten in the United States," he said of the scenes that included Confederate flags, crosses and posters saying "Jesus Saves."

Tobin said that for Catholics concerned about how to move forward, that "in two millennia of trying to live the teachings of Jesus, we're at our best when we're concerned about the common good."

"It's not about me and my wish list, it's more about what we can do together to leave this world better than we found it," he said. "We as Catholics have a legacy that is very appropriate now if we want to avail ourselves of it." 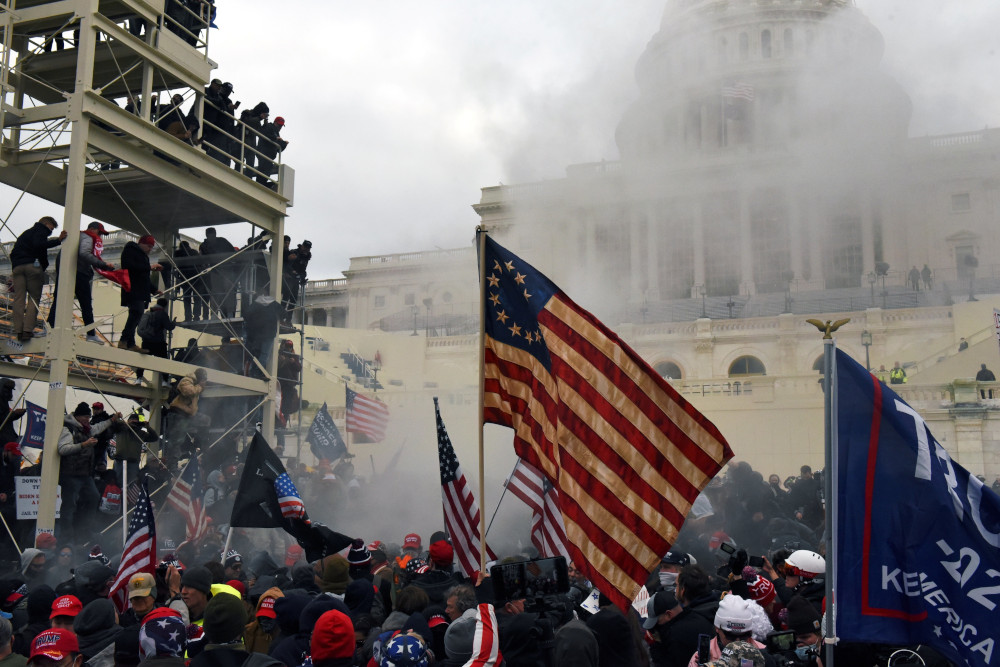 Bishop John Stowe of Lexington, Kentucky, told NCR that "we shouldn't be surprised that when the president of the nation, who has been consistently denying that he lost an election and has been calling for his people to be out there demonstrating and when he has not condemned the kind of groups that has supported him, as horrible and as unprecedented as it is in our times, it's not all that surprising."

"You reap what you sow, as we read in scripture," said Stowe, who also serves as Pax Christi USA board's episcopal president.

"We have to reflect on where we have been, what it is we stand for as a nation and how it is that we've allowed one leader to undermine so many precedents of the rule of law and go unchallenged and how do we enact our faith in a moment like this," he continued.

In a statement on Wednesday evening, Los Angeles Archbishop José H. Gomez, president of the U.S. bishops' conference, said " This is not who we are as Americans," as he condemned the violence unfolding in the capital.

"The peaceful transition of power is one of the hallmarks of this great nation," he continued. "In this troubling moment, we must recommit ourselves to the values and principles of our democracy and come together as one nation under God."

Bishop Michael Olson of Fort Worth, Texas was the first to issue a statement on social media in the midst of the rioting saying "This is a time to pray for peace." By the end of the day on Wednesday, more than a dozen bishops had spoken out in their own capacity.

Several bishops retweeted a message of "Lord God of peace, hear our prayer" from the U.S. bishops' Twitter account, presumably related to the day's violence. Others encouraged Catholics across the nation to pray the rosary.

"Given the breach of the Capitol by protestors, I'll be praying the Rosary for peace at 3 pm.," wrote Bishop Thomas Daly of Spokane, Washington. "Please join me."

"Let us pray that this one nation, under God, will always follow the paths of peace and justice," wrote Bishop Edward Burns of Dallas.

Archbishop William Lori of Baltimore described the day's events in a statement as "shocking and unlawful protests."

"We fervently pray for peace and for God’s protection over our country, our lawmakers, and all those in harm’s way this terrible day," he said.

"Will soon be saying Holy Mass for our troubled nation. In this holy season, as we continue to observe the Birth of the Christ Child, may peace, harmony, unity and fraternity be restored in our country," wrote Bishop Thomas Tobin of Rhode Island. "May God bless and guide America!" 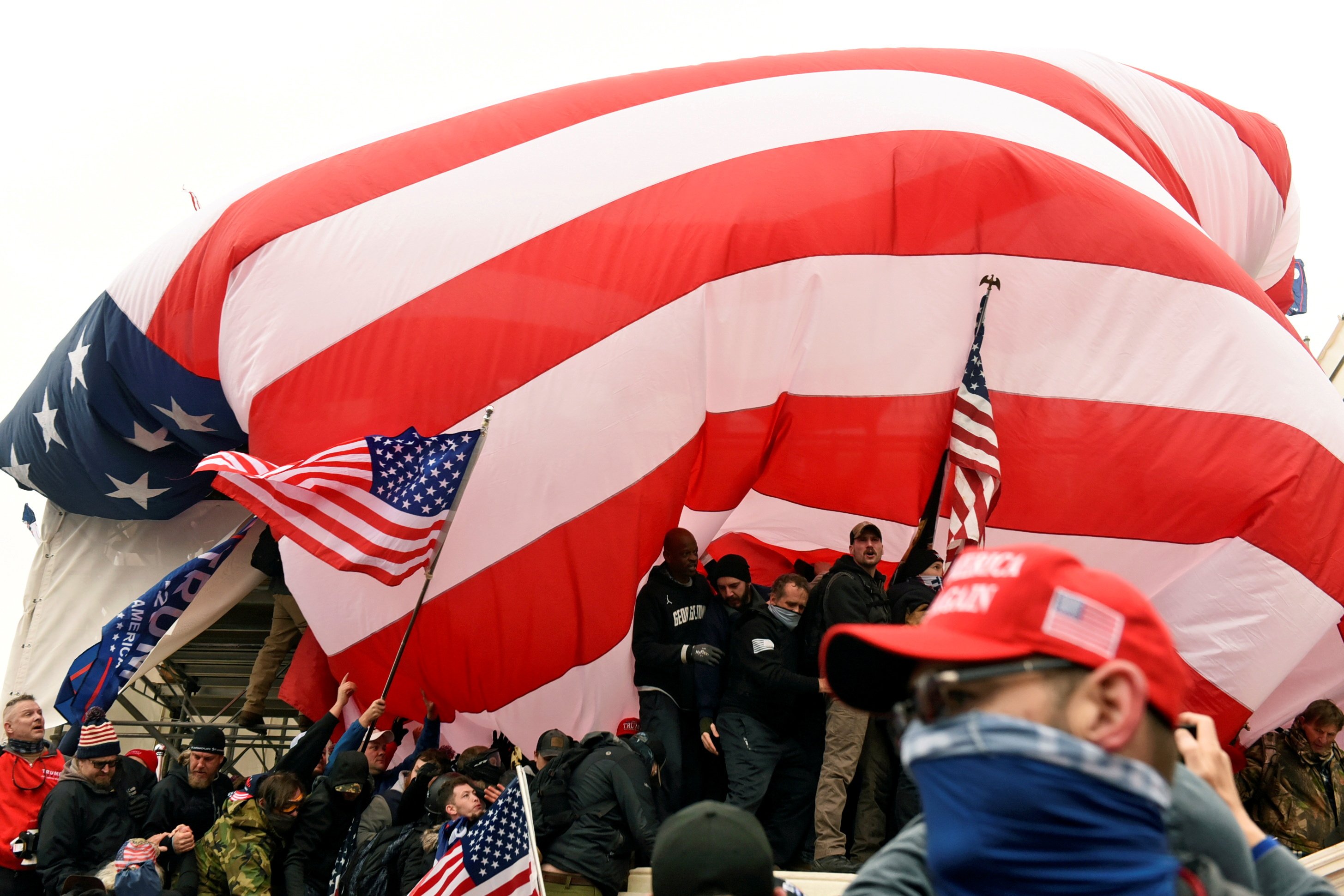 In a statement, Pax Christi USA released a stinging indictment of Trump's leadership, saying "The events unfolding today at the U.S. Capitol are the result of the demagoguery of one man, President Trump, and the failure of all those — politicians, media, family, and more — who excused, overlooked, dismissed or otherwise encouraged the hateful and divisive rhetoric that have defined this president’s term in office."

"Those who could have and should have held this president accountable did just the opposite for the past four years — often with designs on advancing their own agendas — and today’s ugly, shameful incidents at the U.S. Capitol were the sad, predictable outcome of this abdication of responsibility," the statement said.

After the Senate and House chambers of the Capitol were overtaken by vigilantes, President-elect Joe Biden addressed the nation in a live video, saying "the scenes of chaos at the Capitol do not reflect the true America."

"This is not who we are," he said, before calling on Trump to go on national television to "demand an end to this siege."

Eventually, in a video message, Trump encouraged rioters to "go home," adding that "we have to have peace" — but not without repeating the lie that the election "was stolen from us."

Editor's Note: This story was updated at 6:08 p.m. Jan. 6 to include a statement from the U.S. bishops' conference.

A version of this story appeared in the Jan 22-Feb 4, 2021 print issue under the headline: 'You reap what you sow'.