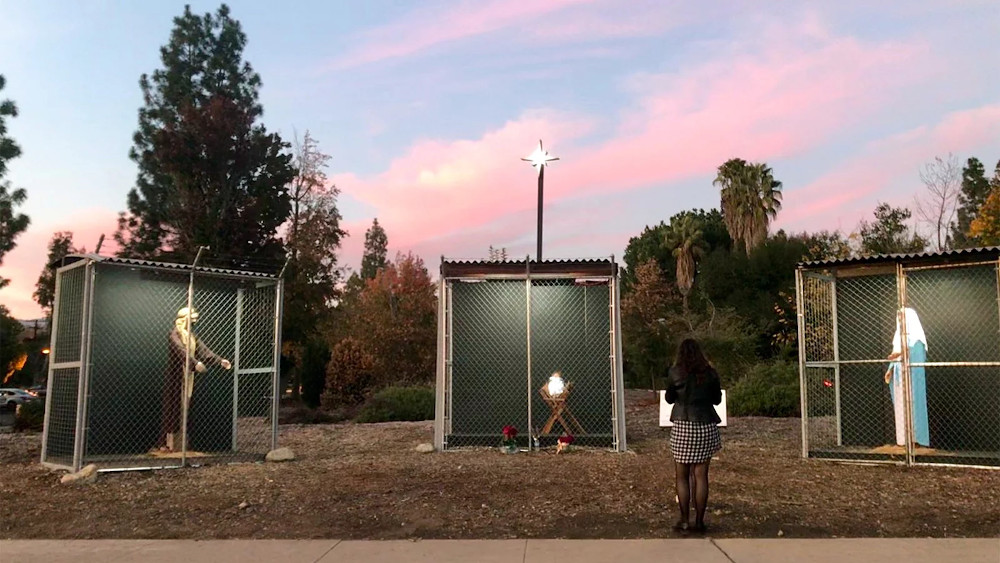 An individual reads a plaque in front of a life-size Nativity scene showing Jesus, Mary and Joseph as refugees in separate cages at Claremont United Methodist Church, Wednesday, Dec. 11, 2019, in Claremont, Calif. The Nativity protests family separation at the border and has received widespread attention. (RNS/Alejandra Molina)

The Nativity scene at Claremont United Methodist Church is striking.

Mannequins of Jesus, Mary and Joseph are separated in individual cages topped with barbed wire. A baby Jesus is wrapped in what resembles a Mylar blanket, similar to the sheets migrants have been given in holding cells.

On a podium, a message reads: "What if this family sought refuge in our country today?"

The Rev. Martha Morales said the church's intention was not to be controversial or political. Instead, she said, the church is trying to be faithful to its calling to do God's work.

"Our purpose is to say, 'This is what we believe that God is calling us to do.' You've got to call out evil and lift up justice," said Morales, associate pastor at Claremont United Methodist.

A stream of people has been visiting the church since the congregation set up the life-size Nativity scene on Saturday (Dec. 7).

People have either commended or lambasted the church for its display, which does not mention President Donald Trump but sheds light on family separation at the border. It has garnered widespread attention from progressive Christians and Conservative commentators like Tomi Lahren.

The church has received a slew of negative emails, and for safety purposes, a local police car has been stationed outside the church as visitors take photos of the Nativity and reflect at the site.

Some of the visitors have talked with one another at the site and pondered the role of Christianity in the immigration crisis at the border.

One woman teared up, saying the display reminded her of the 16-year-old Guatemalan migrant who died in Border Patrol custody after being diagnosed with the flu. Another described the grounds of the Nativity scene as "holy," given the international recognition of it.

In Canada, a similar Nativity emerged in Toronto this week, showing a baby Jesus wrapped in a solar blanket in a cage.

Erecting Nativity scenes to declare public statements on social issues is nothing new. They've been used to highlight the immigrant struggle, take a stand on LGBTQ issues and to show non-religious figures like Charles Darwin and Albert Einstein.

Earlier this month, the Vatican showcased its Nativity that depicted the plight of immigrants and refugees with the statue of a man carrying his belongings as he approaches the manger. The pope's environmental message was also underlined by the fact that the creche is entirely plastic-free. 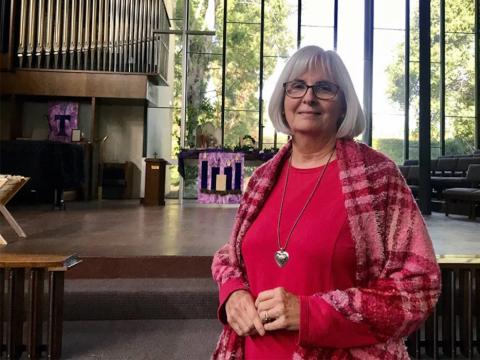 In Boston, a church in Dedham, Massachusetts, set up a Nativity scene last week that is meant to remind viewers about the impact of climate change.

Inside the glass manger, plastic bottles and other trash float past Jesus, Mary and Joseph as they are swept away in waves of blue. Beneath the water, the shepherds' flock and the wise men's camels are drowning. Some, though not all, of the animals are already beneath the surface of the rising tide. and camels are drowning.

Fr. Stephen Josoma, the pastor at St. Susanna Parish, said the church's nativity scene was designed to make a splash.

"We're quite pleased that we're drawing people's attention to the principle issue of our generation," Josoma said. "If they are churchgoers, they need to be hearing about all this in church, and if not then they need to ask their pastor to think about it."

For Claremont United Methodist, it's an annual tradition to display bold Nativity scenes. The church is located in a college town and is next to the Claremont School of Theology, an institution that author and theologian Diana Butler Bass described as one of the most liberal seminary schools.

Butler Bass imagined that the congregation members, who lean a little bit older, thought "they were speaking to their local neighborhood," which includes residents, students and visiting professors.

"Their neighborhood has known them for generations," said Butler Bass, who shared the Nativity photo on her Twitter profile.

Certain sections of the Internet, however, are unfamiliar with the church and saw it very differently.

"The right wing saw it as a political attack on the Holy Family and on Christmas," she added.

The Claremont Nativity includes a statement that references the Trump administration's family separation policy. It notes the more than 5,400 children estimated to have been separated at the border since July 2017.

"Imagine Joseph and Mary separated at the border and Jesus, no older than two, taken from his mother and placed behind the fences of a Border Patrol detention center," it reads.

This is not the first time Claremont United Methodist has made headlines for its Nativity scene. 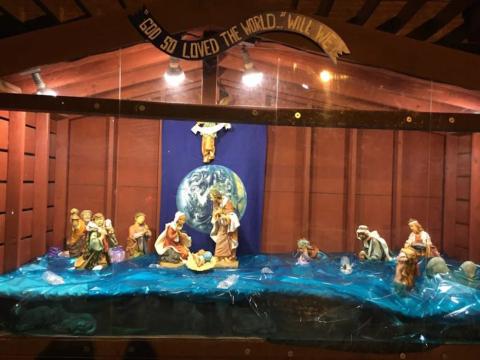 In 2013, the church displayed a Nativity that portrayed a slumped Trayvon Martin in a black hoodie with blood pouring down his chest. The scene was titled, "A Child Is Born, a Son Is Given."

"There is no better time to reflect on gun violence than advent, when we celebrate the birth of Jesus," a message on the display read. "Jesus was born into a state of total vulnerability as an innocent, unarmed child during a time of great violence much like Trayvon Martin."

Morales believes news of this new installation took off after prominent theologians like Butler Bass shared the Nativity photo that their new lead pastor, the Rev. Karen Clark Ristine, posted Saturday evening on Facebook. In that post, Ristine said she was moved to tears by the Nativity and shared its theological statement.

Many people online have expressed anger and have been critical of the church's Nativity.

"Whoever built this lie will burn in hell for blasphemy," one Facebook commenter said.

"So wrong in every sense to politicalize the birth of Christ!" another wrote.

As Christians, Morales said they need to stand up and speak against injustices. She said the church was also working on translating the Nativity message into Spanish, adding that many Spanish-speakers have stopped by the church to see the display.

"It means something to feel that everybody doesn't hate you," she said.

On Wednesday evening, groups of people stopped by to spend time with the Nativity.

One woman, who did not want to be identified, was grateful for the display. She also appeared surprised that a Christian church would make such a strong statement supporting immigrants.

That struck RJ Lucchesi, 35, a student at the Claremont School of Theology. He lives in San Diego and is on campus once a week.

"My Christian faith has so often been in the hands of conservative policy," Lucchesi said.

The Nativity scene, he said, "feels a little bit like holy ground."