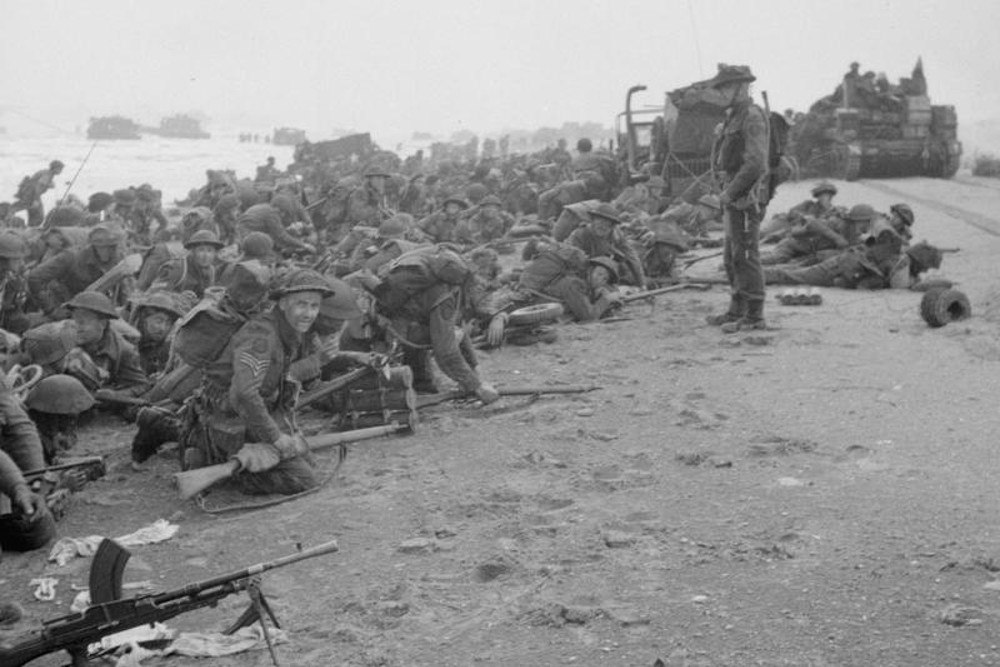 Tomorrow is the 75th anniversary of the Allied invasion of Normandy, "Operation Overlord" as it was known by the planners, D-Day. This last has become a metaphor for any decisive moment when the hinge of fate is expected to swing one way or the other. It is worth reflecting on this anniversary, one of the last at which some few veterans are still left, about how our political life has changed, and how our views of war have changed too.

D-Day was the most comprehensively complicated operation of World War II. As Soviet leader Joseph Stalin observed in his telegram of congratulations to British Prime Minister Winston Churchill:

My colleagues and I cannot but admit that the history of warfare knows no other like undertaking from the point of view of its scale, its vast conception, and its masterly execution. As is well known, Napoleon in his time failed ignominiously in his plan to force the Channel. The hysterical Hitler, who boasted for two years that he would effect a forcing of the Channel, was unable to make up his mind even to hint at attempting to carry out his threat. … History will record this deed as an achievement of the highest order.

Hurling a quarter of a million men against a hostile coast had never been tried. The prior landings in Sicily and at Anzio were mere appetizers, although the Anzio landing yielded important lessons about how not to do it: There the Allied forces focused on landing their equipment, rather than securing their lodgment and breaking out. The German counter-attack was strong and the Germans entrenched, leaving the Allied troops hemmed in along a narrow beachhead. Churchill sent a biting telegram to the commander that asked: "How many of our men are driving or looking after eighteen thousand vehicles in this narrow space? We must have a great superiority of chauffeurs."

The Channel had been forced only once before, and under very different technological circumstances: In 1066, William the Conqueror crossed from his native Normandy to lay claim to England. In one of the planning sessions for D-Day, while the generals and experts were debating the best time to land, based on tide and moon, Churchill asked, "When did William cross?" and it took some time for his American colleagues to grasp the reference.

America had refused to enter the war. We watched the rape of Czechoslovakia and Poland, and the rapid conquest of Norway, France and the Low countries. During the long winter of 1940-1941, when Britain endured the non-stop nighttime bombing raids on London and other cities, the Blitz, the U.S. government sent weaponry to Great Britain, but such was the isolationism of the American people, there was little clamor for entering the war. Only when we were attacked at Pearl Harbor did we plunge into the war, and plunge with decisive effect.

World War II is called the "good war" and there is no doubt that the regimes we fought embodied evil in ways the world had not yet witnessed. The Nazis really set the benchmark for human depravity at Auschwitz-Birkenau, Treblinka and the other death camps. The Japanese militarists who raped Nanking were scarcely less inhumane. But, the truth be told, all sides committed atrocities and atrocities we should have recognized as such. When Air Force leaders in both the U.K. and the U.S. argued for the value of strategic bombing, that is, the bombing of civilian population centers and not merely military targets, they claimed such attacks would turn the tide of the war. They argued the bombing would destroy the civilian morale of the Germans and Japanese. But, they knew such bombings during the Blitz had not sapped the will to fight of the British people. Why did they think it would be any different with the roles reversed? So, it was not such a "good war," even if it was a grimly necessary war and remains, to my mind, the best argument for the maintenance of just war theory as the primary approach to the subject by Christian ethicists.

Our political leadership during the war — first Franklin Roosevelt and then Harry Truman — was extraordinary. Despite the huge differences in personality and background, both men faithfully executed the office entrusted to them and did so with intelligence and foresight. The comparison to our current political leadership is not a flattering one.

So, too, in the U.K. Churchill was wrong about almost everything in his long political career, wrong about Ireland, wrong about India, wrong about trade, wrong about Gallipoli, but he was right, and was one of the few who had been right all along, about the central issue facing Western democracy in the 1930s: There could be no negotiating with Hitler. When one compares him, or his Labour Party colleagues, to the current political leadership in the U.K., the comparison is unflattering to the current leaders. And, as for the U.S., think of it: Not only were Roosevelt and Truman two of our greatest presidents, but Truman was succeeded by Dwight Eisenhower who led Overlord. He, in turn, was succeeded by John F. Kennedy who used his father's connections to get him into the Navy while our incumbent president used his father's connections to keep him out. There has been a decline.

U.S. and British troops landed on Normandy to begin the liberation of France and Western Europe. Yesterday marked the 75th anniversary of the liberation of Rome. From northern France and from the boot of Italy, our soldiers marched to rescue countries that had been enslaved by poisonous tyrants, who defended their tyranny with propaganda we would today call nationalistic populism. In the East, the Soviet troops liberated from one shackle only to affix a new one. But, in the West, one of the great civilizational achievements of the last half of the 20th century was the creation of the European Union and NATO. Two brutal, devastating world wars had wreaked havoc on Europe, sending millions of soldiers and civilians to their deaths, and in the post-war period, Western Europe's leaders, most of them Catholics informed by Catholic social teaching, created structures that have endured down to our own time. For these past 75 years, the French did not have to look across their eastern frontier with dread. 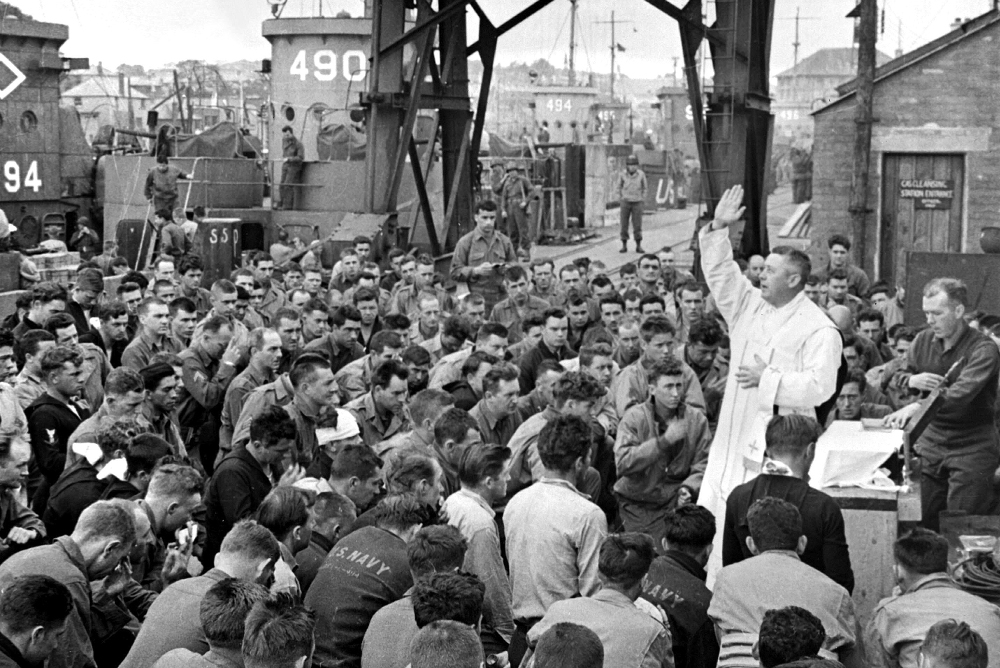 Fr. Edward J. Waters, a U.S. Army Catholic military chaplain from Oswego, New York, who holds the rank of major, gives the final blessing at Mass on a pier in Weymouth, England, on June 6, 1944. The troops were among those taking part in the D-Day Allied invasion of the European continent. (CNS/handout via Reuters)

In the light of last week's election results, it is the Germans, who held off the tide of nationalism better than most, who look across their frontier with France — which rewarded the bigoted party of Marine Le Pen a victory — with anxiety. Italy is again enthralled by simplistic neo-fascist slogans and the men who shout them. In Poland and Hungary, rightwing nationalistic populist governments are in power. And, the U.S. president denigrates our allies and praises tyrants who seek to destabilize the European Union and for whom the recent elections were a great stride forward. President Donald Trump, we can be sure, is thoroughly ignorant of the achievement the European Union represents.

Pope Francis referred to the two world wars in his press conference Sunday returning from Romania. "Please, let's not return to this. Let's learn from history. Let's not fall in the same hole," he said. Later, he added, "I would say to believers, 'Pray for Europe … for unity, that the Lord will give us this grace.' " This anniversary of D-Day, let that be our prayer.