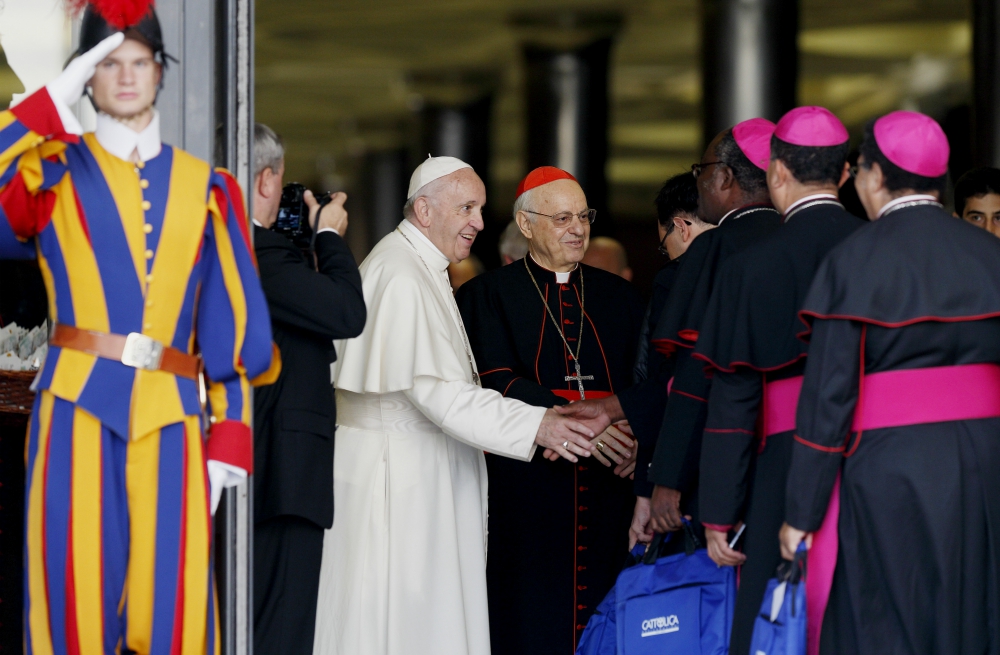 Pope Francis greets bishops as they arrive for a session of the Synod of Bishops on young people, the faith and vocational discernment at the Vatican Oct. 16. (CNS/Paul Haring)

I have not been shy about criticizing those conservative voices that have, in one way or another, viewed this month's Synod of Bishops with skepticism, whether that has been Philadelphia Archbishop Charles Chaput's publishing a theologian's critique of the instrumentum laboris or J.D. Flynn's fretting about the rules.

Some friends on the left have also adopted an approach to the synod that seems out of touch. The Women's Ordination Conference staged a protest outside the Vatican as the synod opened. They certainly have a legitimate gripe: I can understand why a Synod of Bishops should restrict voting to bishops, but once voting is extended to nonordained men, it should be extended to nonordained women also.

Indeed, I am sympathetic to the fact that sometimes a marginalized group must shout from the perimeter of an event from which they are excluded to gain any attention at all. Still, I think adopting a tactic we associate with political life is misplaced at the synod, at least as Pope Francis is trying to change the synodal process.

Similarly, a coalition of gay rights groups combined forces under the banner "Equal Future" to urge the synod to listen to the voices of LGBT youth who have been harmed by societal prejudice against gays. The group's leader, Tiernan Brady, goes out of his way to explain that his is not an "anti-church" campaign.

The group released a poll during the synod that shows a majority of Catholics in the eight largest Catholic countries support changing the church's teaching on LGBT issues. So what? The intrusion of political ways of thinking is understandable, but is it helpful?

In both cases, as well, the determination of the activists seems misplaced when you consider the ecclesial reality the pope faces. It is self-evidently true that if you are a bishop in the West, you know, or should know, that the vast majority of our young people find our teaching on homosexuality morally repugnant. It seems clear to most that the church needs to find creative ways to include women in all decision-making.

But is either of these issues exactly ripe for discussion at this moment in a synod of the entire church? When all hell broke loose at the last synod when the much less contentious issue of providing Communion to the divorced and remarried was broached? I say "less contentious" for the simple reason that the other lung of the church, our Orthodox brothers and sisters, adopted the approach to Communion for those in a second marriage that Francis has now permitted in the Latin church.

Conservatives should not get a veto over progress by threatening to cause a furor, but sometimes the potential that a premature conversation will set things back even further exists. I think the best that could be hoped for on these topics at this is synod is a recognition that the current teachings on both homosexuality and the role of women in the church are inadequate and an encouragement of dialogue at the local and national levels.

Sexuality is such an inculturated reality, we should not be surprised at the variety of its expressions. We Catholics also have a proud tradition of supporting universal understandings of human rights since at least the magisterium of Pope Pius XII. Reconciling those intellectual impulses will not be easy, still less with a 2,000-year tradition built on protological misunderstandings of sexuality. A whole lot of listening has to occur before these issues are ripe.

I was moved by the words of Archbishop Peter Comensoli at the end of his interview with my colleague Joshua McElwee:

It's not just a matter of hearing ... voices and coming up with some sort of consensus of opinion. If the synod is reduced down to a particular opinion winning the day, then it's not truly a synod. That's a political meeting. ...

I think that's part of my responsibility, at least as one of the voters, to search in that way and to find something to say. To express something is to communicate something, so something needs to be said. And what might that be is part of the journey of these next few weeks.

The words "what might that be" indicate that docility of spirit that marks someone who is genuinely looking for the promptings of the Holy Spirit, someone who does not enter the conversation convinced he has all the answers, maybe not even all the questions. And his distinction between "winning the day" and genuine synodality gets to the heart of what I think Francis is after in the reforms he has already introduced to the synods.

Let's remember what became of this most defining of post-conciliar institutions before Francis. Pope Paul VI launched the first synods and they were admittedly unwieldy, trying to accomplish too much in too short of a time. Under Pope John Paul II, they became exercises in sleep deprivation, so boring it amounted to torture to expect the participants to stay awake. Pope Benedict XVI introduced the karaoke hour, setting aside the last hour of each day for any synod father to come to the microphone and say whatever he wished, and that loosened things a bit.

But Francis has brought his experience from Latin America, in which there is widespread consultation in advance of a meeting of the continent-wide bishops' conference, CELAM; the bishops begin with days of prayer together before the formal meetings commence; and there is a participatory discussion throughout.

The potential for increased synodality to help the church in so many ways makes me hope that those who want change in the church, even those who want change I would applaud, will give the pope some wiggle room. If he were not plowing ahead with reforms on a variety of fronts, I would say, to hell with waiting. But he is. The Viganò testimony showed the kind of small-minded nastiness he is up against.

Instead of trying to affect the synod from the outside with essentially political means, maybe prayers for the guidance of the Holy Spirit within the aula are what are needed.