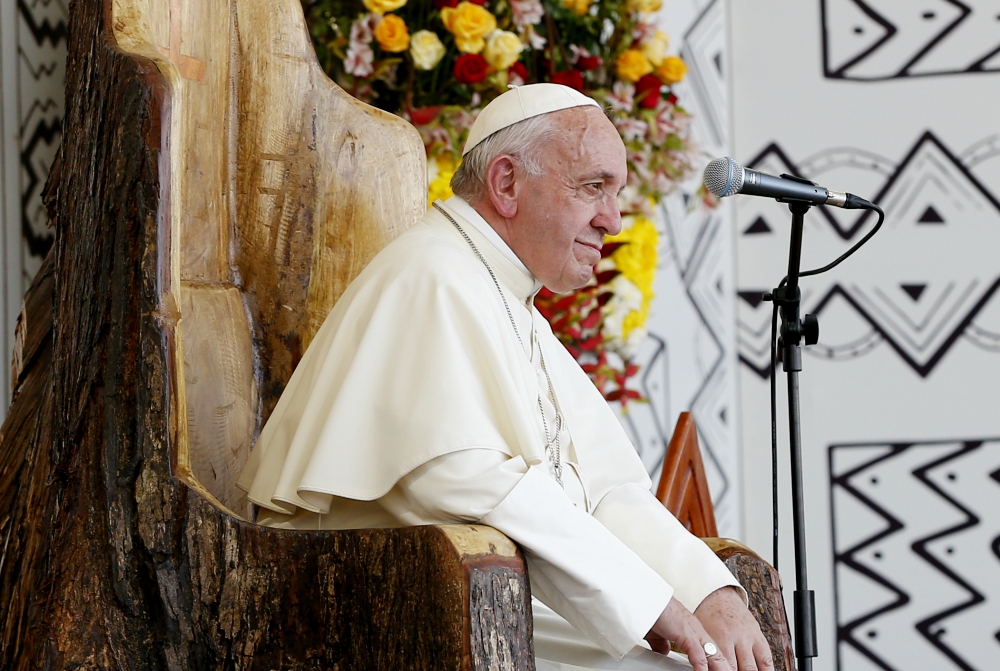 Pope Francis listens during a meeting with people at the Jorge Basadre Institute in Puerto Maldonado, Peru, Jan. 19, 2018. (CNS/Paul Haring)

The Amazon synod will open next Sunday, Oct. 6, with Mass in St. Peter's Square. Like everything else in this pontificate, the synod is surrounded in controversy, not because it needs to be so, but because the professional haters of Pope Francis now insist that everything he does or says is wrong or evil or heretical.

Cardinal-designate Jesuit Fr. Michael Czerny and Dominican Bishop David Martínez de Aguirre did a fine job explaining the rationale for the synod in a recent article in La Civiltà Cattolica.

"Laudato Si' came out in June 2015. Over the years, numerous initiatives contributing to integral ecology have begun, many of them Church-based," they wrote. "Meanwhile, according to all indicators, the crisis has worsened significantly. The Amazon Synod is a conscious ecclesial effort to implement Laudato Si' in this fundamental human and natural environment."

The instrumentum laboris (working document) for the synod, like Francis' encyclical "Laudato Si', on Care for Our Common Home," calls for an "integral ecology." I admit I am not crazy about the word "integral," at least not in English. To me, the word has unfortunate associations with Fr. Leonard Feeney, Archbishop Michel Lefebvre and Cardinal Alfredo Ottaviani, those integralists who opposed the Second Vatican Council's efforts to renew Catholic life and theology.

In addition to the synod being a chance to really apply Laudato Si' and to promote integral ecology, the simple of fact of the synod highlights another of this pontificate's themes, synodality itself. The pope could have issued a document about the challenges facing this region, and the relationship of those challenges to the broader culture and to the church, all on his own authority.

That is not this pope's way. His method is that pioneered by Cardinal Joseph Cardijn: See, judge, act. And, in order to see more clearly, judge more fairly, and act in a more decisively Christian manner, you must listen and dialogue, listen and dialogue. That is what synodality is all about.

All this, unsurprisingly, has set Francis' critics on edge. Leading the pack is Cardinal Raymond Burke and Kazakhstan Auxiliary Bishop Athanasius Schneider. They have called for a 40-day crusade of prayer and fasting to prevent what they term "serious theological errors and heresies" in the instrumentum laboris from being adopted at the synod.

The conservative duo is alarmed by the "implicit pantheism" in the instrumentum laboris and its openness to "pagan superstitions."

"The Instrumentum Laboris draws from its implicit pantheistic conception an erroneous concept of Divine Revelation, stating basically that God continues to self-communicate in history through the conscience of the peoples and the cries of nature," they write. Good thing they were not around when St. Augustine was employing Neo-Platonic philosophy to articulate his understanding of divine revelation, or when St. Thomas Aquinas used Aristotelian concepts to do likewise.

The rest of their eight-page rant is similar: They supply the worst possible interpretations of statements taken out of context to promote the idea that the Holy Father and a Synod of Bishops is about to partake of heresy.

Last week, NCR ran an editorial about the synod that stated, in part, "How much credence one should give to a two-person campaign against the pope is an open question." Regrettably, the opposition is not limited to the two buffoonish prelates mentioned above.

A few weeks back, EWTN's Raymond Arroyo convoked his "papal posse" to discuss Francis and the synod. Especially ironic were their complaints about the possibility that the synod might make celibacy optional in certain circumstances.

"This is a subversion. ... It would be a total disaster to make celibacy optional. ... Basically, it's an abandonment of what Jesus himself lived," frothed Fr. Gerald Murray.

I do not remember Murray and the others complaining when Pope Benedict XVI issued Anglicanorum Coetibus, which allowed married clergy from the Anglican Communion to join the ranks of the Catholic clergy. Was Benedict permitting an "abandonment of what Jesus himself lived"? Are our Eastern Orthodox and Byzantine Catholic brothers committing a similar abandonment when they permit married clergy?

In this internet age, an auxiliary bishop from Kazakhstan can make a splash, but the particular vehicle for Burke's and Schneider's vile insinuations is the National Catholic Register, an arm of EWTN. The Register also led the reporting of Archbishop Carlo Maria Viganò's nasty attempt at score-settling.

It would be bad enough if these ridiculous and not very intelligent prophylactic attacks on the synod were confined to LifeSiteNews and similar marginal outlets. But, EWTN and the Register reach millions of Catholics. Indeed, a 2016 survey of the U.S. episcopate indicated that more bishops read the Register than any other Catholic newspaper or magazine.

It is fine to entertain criticisms of the synod's instrumentum laboris. I found it terribly dry at points. And I would like a more explicit connection between some of the anthropological perspectives contained here and the anthropology articulated in the Second Vatican Council's Gaudium et Spes.

But the hysterical allegations of heresy and error tell us more about the accusers than the accused. And the haters are not few nor are they insignificant. The suggestion I made in August is even more obviously needed now: The U.S. bishops should scrap their agenda for their November plenary meeting and spend the entire time discussing how to cope with those who are spreading the seeds of schism.