Six years ago, I gave a very positive review to Maura Jane Farrelly's book Papist Patriots: The Making of an American Catholic Identity. (Here and here.) That work focused narrowly on the culture of colonial Maryland and how Catholic experiences primed them for a revolution that was itself framed by decidedly anti-Catholic ideas. It added serious research and intelligent analysis to the historiography of 17th and 18th-century religious life in this country.

Now, Farrelly has widened the frame of her lens with Anti-Catholicism in America, 1620-1860, and this book also deserves high praise for its extensive research and careful analysis, explaining certain anomalies in current historiography, and demonstrating the centrality of religious ideas and bigotry in shaping the early years of these United States.

In the opening chapter, Farrelly displays a skill one does not often see these days, one I certainly lack, as she acknowledges the need to provide a brief overview of the major themes that shape her specific concerns, and provides them very succinctly and neatly. So, the reader encounters subchapters, in order: "The Reformation, Briefly Considered;" "Protestantism, Briefly Considered;" and "English Protestantism, Briefly Considered." Each subchapter is no more than half a dozen paragraphs that give the reader a grasp of what is meant when these words are used or, better to say, what those words meant in the time period Farrelly surveys. This skill is much harder than it looks and reading these subchapters was like watching an Olympic gymnast: She makes it look easy.

These subchapters lead to the core ideological issue that really defines the rest of the narrative: Calvinism and liberty. Farrelly cites the writings of Robert Browne, a Calvinist divine whose followers boarded the Mayflower and set sail for America, who saw Catholics as subhuman, lazy, submissive, dull and ignorant. Then she gets to the heart of the matter:

"Robert Browne's sixteenth-century characterization of Catholics also touched upon a theme that would prove to be extremely important to his fellow Calvinists – and indeed, to all English-speaking Protestants – in the centuries to come: liberty. It was something that Catholics simply did not have, or at least Protestants didn't think they had it. The reason Catholics were "vile," after all, was that they were "led by others" when it came to their understanding of God; they were not free to apply their own reason to the words of Scripture. That subservience left them vulnerable to precisely the corruption that Rome had been perpetuating."

Here, in embryo, was that concern for "civil and religious liberty" which would become the principal ideological organizing principle of the American Revolution, a seed planted before the Calvinists we know as Pilgrims came seeking economic opportunity. 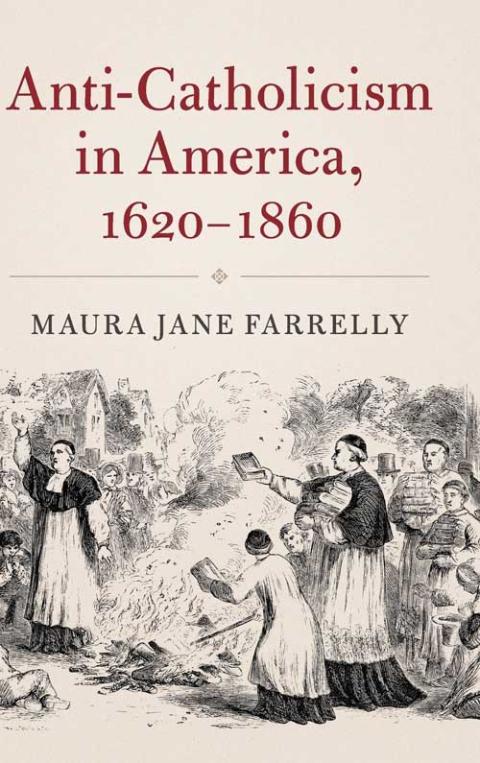 I would argue those Pilgrims enjoyed plenty of religious freedom in Holland and that they came here, like Latin Americans today, seeking better economic opportunities, not religious freedom. Farrelly makes a different point: They did not embrace religious liberty as we understand the concept, as a God-given right extended to all as an inalienable right. They certainly did not extend it to those who challenged their orthodoxy. "The obsession with liberty is the reason the Puritans have been portrayed in America's 'creation myth' as having come to North America in the name of religious freedom, even though they hanged Quakers, banished Baptists, railed against Catholics, and removed Indian children from their tribes in an effort to convert them to Christianity," she writes.

The 17th century in England was largely defined by fights not with Catholics, but within the Protestant fold. The High Church reforms of Archbishop William Laud went hand-in-chirothecoe with the authoritarian tendencies of the Stuart monarchs, led to a Civil War and an act of regicide, the reign of Cromwell complete with a genocide against the Irish, and finally a restoration of Anglicanism. The Pilgrims and Puritans were not fleeing a Catholic realm, but the realm of Laud and Charles I. Only with the ascent of the Catholic James II to the throne in 1685 did Catholicism serve to unite Protestants both in Old England and New. He appointed Catholics to key commands in the government and army, revoked the charters of the New England colonies and appointed a royal governor, and courted his dismissal which came in 1688.

(On the dry sink in my dining room, I proudly display a piece of the Charter Oak in which the colonial leaders of Connecticut hid our colony's charter when the royal governor demanded it in 1687. The tree was felled in a hurricane in 1856. The great-great-grandmother of a neighbor collected this piece when she was in Hartford that year. When the Treasury issued quarters for each of the fifty states, the Charter Oak was the design chosen for Connecticut's.)

Here Farrelly overstates the case, I think, arguing that after the Glorious Revolution, the need to defend the Protestant interest smoothed over the differences between Calvinists and Anglicans. She footnotes a book I have not read, but have already ordered, Thomas Kidd's The Protestant Interest: New England After Puritanism, and perhaps I will be persuaded. But, when the reign of Queen Anne, 1702-1714, was continually bedeviled by bills against Occasional Conformity, and when Calvinism in New England was swept up with the Great Awakening only a generation later, it is hard to believe those tensions really softened into a "generic Protestantism." Anne certainly never thought herself a generic Protestant. Nor did Cotton Mather. But, this is a small point that does not materially affect the book.

Farrelly considers the limits of anti-Catholicism, pointing to the irony that while James I enacted several laws that severely harmed Catholics, he likewise accepted his wife's secret conversion to Catholicism, elevated Catholic peers, and prepared a very generous charter for Lord Baltimore, the founder of Maryland. Similarly, even when a Protestant rebellion threw off Catholic rule in Maryland at the end of the century, Catholics were not harassed as they were in New England, in large part because they were familiar. Then, as now, familiarity often serves as the death knell of bigotry and prejudice.

Farrelly then turns to what I think is the most important theme of the work, the rise of specific ideas about government and liberty that were forged in the furnace of anti-Catholicism and would eventually lay the groundwork for the American Revolution and its particular ideological presuppositions. I will pick up this review on that point Monday.