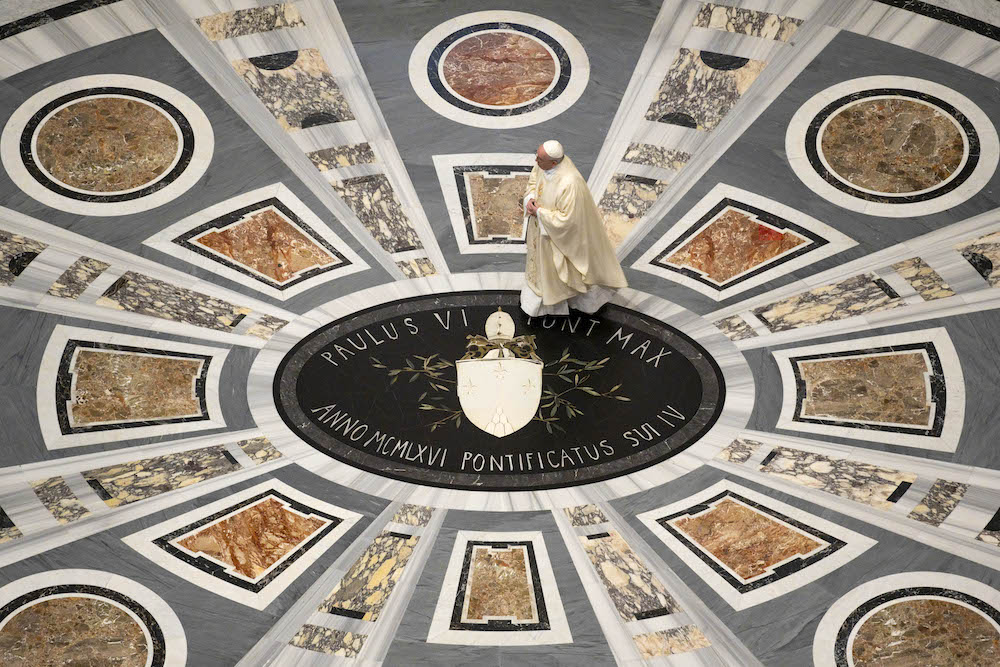 Pope Francis crosses St. Peter's Basilica on his way to celebrate Mass at the tomb of St. John Paul II May 18, the 100th anniversary of the late pope's birth. (CNS/Vatican Media)

There is something amusing about watching George Weigel back-pedal. In response to my colleague Joshua J. McElwee's reporting that Cardinal Timothy Dolan had sent a letter to accompany Ignatius Press' mailing of Weigel's book, The Next Pope: The Office of Peter and a Church in Mission, to all the cardinals, the biographer of Pope John Paul II told McElwee that the book "does not contain a single sentence about a future conclave." He added, "No potential candidates are named and no conclave strategy is discussed." This is disingenuous.

Where, pray, does he think this "next pope" about whom he has penned a tome will emerge if not from a conclave?

What is more, I find it hard to believe that Weigel has never been on a search committee. The first thing the committee does is sketch a job description, examine what kind of candidate they would like, what skills that person needs, how important it is that the person to be hired shares a particular sense of mission, that sort of thing.

Those are precisely the sorts of things Weigel details in his book, which I reviewed a fortnight ago. And if I had to sum up the attributes Weigel is seeking in a new pope in a single phrase, it would be that he wants the next pope to be very unlike the incumbent. The book is littered with attacks, some more subtle than others, on Pope Francis.

Weigel did not so much back-pedal as distract when he spoke with J.D. Flynn, the editor at the EWTN-owned Catholic News Agency. Addressing the concern that it is inappropriate to write a book about a future pope while the current pope is still in good health, he said, "It's ridiculous. I don't recall anyone making such a silly criticism when Peter Hebblethwaite and Luigi Accattoli wrote books about the future of the papacy during the pontificate of John Paul II."

Hebblethwaite, longtime NCR Vatican correspondent, did indeed write a book called The Next Pope: An Enquiry and published it in 1995. I did not read it. I am sure it was highly critical of Weigel's hero St. Pope John Paul II, a man about whom I have very ambivalent feelings. Weigel's invoking him is interesting, seeing as Weigel has not been shy about criticizing NCR for its failure to be sufficiently Catholic in his eyes. Now he hides behind one of our own when it is convenient.

Of course, Bernardin would never have been so presumptuous in the first place and, what is more, he would never have endorsed a book that was so critical of an incumbent pope. This gets to the heart of what was wrong with Dolan's letter and with Weigel's book: While disdainful of the sede vacantism and other looniness we associate with the extremists at LifeSiteNews or Church Militant, the opposition to Francis manifested by Dolan and Weigel is akin to the behavior of a child who has had his toys taken away. Dolan was a darling of the John Paul II-Benedict XVI era, the rising American star, the American papabile even. Weigel was the "authoritative" interpreter of the John Paul II papacy, the layman who had easy access to the papal apartment and whose phone calls American prelates returned. Then the cardinals elected Francis, and suddenly all the markers of American Catholic identity that Dolan, Weigel and their ilk had crafted in the last quarter of the 20th century and first decade of the 21st were cast aside.

Not to put too fine a point on it, but those markers of Catholic identity were always hooey. The Dolan-endorsed Weigel vision for the Catholic Church was always driven as much — or more — by political as theological concerns. So, for example, John Paul II's repeated defense of unions was downplayed on this side of the Atlantic, or unions in Poland were deemed good while those in the U.S. were in the vanguard of secularism. The promotion of interreligious dialogue so central to the Second Vatican Council and the work of every pope since became slanted, as mainstream Protestant churches became a target for derision, and an "ecumenism of hate" was forged with white Protestant evangelicals. This development was so twisted by politics that regular church-going, white Christians are Donald Trump's base, a fact so monstrous it should send a shiver down the spine of the body of Christ. (I deplore efforts to reduce the Christian Gospel to a politics of the left as well!)

The distortion of the Catholic tradition touched more basic realities, too. In a devastating review of Weigel's new book just published at America, Msgr. John Strynkowski, former director of the doctrine committee at the U.S. bishops' conference, writes:

In his insistence on the centrality of Christ in the church, Weigel makes only passing reference to the crucified and risen Lord and no reference at all to the cross. This is a serious omission; the church stands under the cross for both judgment and salvation. And the cross also stands over against a world of massive greed and exploitation of peoples. The cross is ultimately the source of Christian solidarity with those who are most vulnerable and leads not only to works of charity but also to the church's social doctrine for transforming unjust social structures. St. John Paul II was quite critical of those who by silence become complicit in systemic injustice.

The word jumps off the page: complicit. It is the key to the Weigel vision, the transformation of engagement with the world into complicity with the world.

This week's brouhaha is one more piece of evidence — if more was needed — that the neocon politico-theological complex in this country is not evangelizing anyone. Indeed, it shows how out of touch they are that they did not realize how people would react to a cardinal shilling for a book, the premise of which is the current pope's demise. Weigel's vision will remain popular in his own circles. Dolan's leadership will be praised at EWTN. But the curtain has been pulled back further. The rest of us see what they are up to. It is more pathetic than provocative at this point. Whoever the next pope is, it will be even easier for him to recognize the neocon vision as essentially fraudulent.