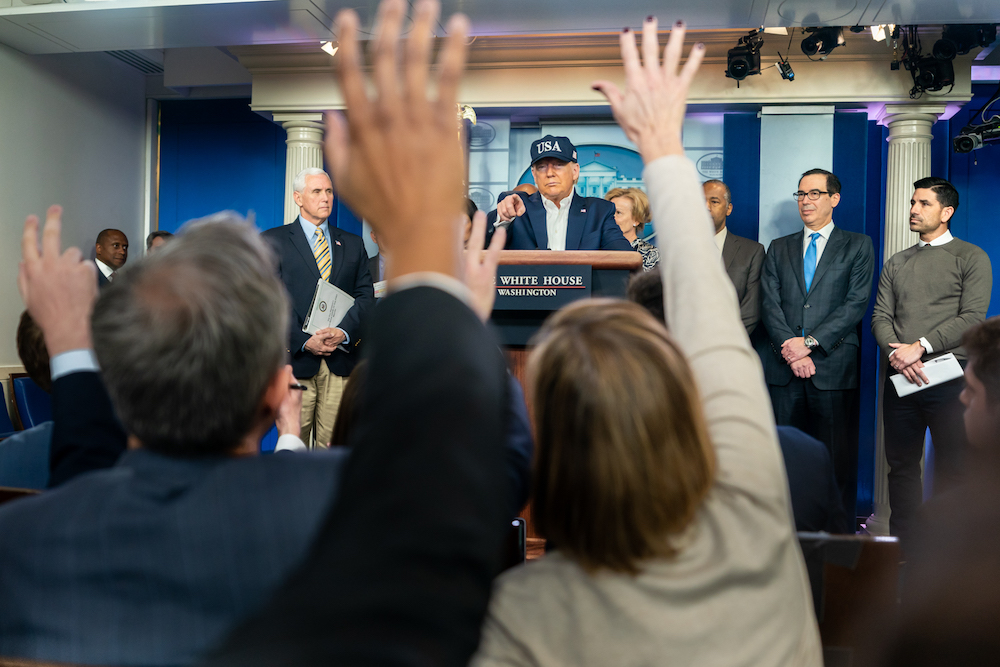 Many people have asked me in recent days what the political consequences of the COVID-19 crisis will be. The short answer is: It's complicated and, like so much else about this virus, not entirely foreseeable. We also need to start addressing the related question, which contains a high quotient of moral consideration: Is it wrong to politicize the virus, and what exactly does it mean to politicize it?

I did not, at that time, foresee the dire economic consequences that would befall the nation. It is as yet impossible to know which of two competing impulses will govern the assignation of responsibility for these dire consequences. On the one hand, people want to be able to look to their president for leadership, and we all want him to succeed. Besides, no one is responsible for a virus. On the other hand, having taken credit for the booming economy for three years, watching him state "I don't take responsibility at all" for his administration's late response to the virus might cause whiplash for some voters. Questions of causality for economic success or failure are not uppermost in the minds of many voters.

By and large, people who support Donald Trump will continue to look for excuses not to blame him for the government's failed response to the virus. They will accept his claims that his administration has been on top of it. Those of us who do not support the president find those claims as ridiculous as the thousands of other outrageous claims he has made during his three years in the White House.

The key is how those in the middle, those who do not have strong feelings about Trump one way or the other, will respond. We are talking about people who do not pay a whole lot of attention to politics. They may not have seen the president repeatedly minimize the virus through the month of February and early part of March. They likely do not know that one of the best things about being president is the access it affords to the best information imaginable, and that this is a part of the job our uncurious incumbent has failed to cherish, to put it mildly. I suspect it is such voters who account for the reason that Trump's overall approval rating has ticked up this week, from 42.3% at its beginning to 43% yesterday according to FiveThirtyEight.

It is clear that nationalist politicians like Trump — Italy's Matteo Salvini and, to a lesser extent British Prime Minister Boris Johnson — all think of themselves as Winston Churchill's heirs: bold, decisive, courageous. But, in the face of this kind of crisis, they are more like Canute rather than Churchill. Bombast is no substitute for competence. Is that clear to the voters who, this week, registered that higher level of approval of the president?

If a Democratic super PAC or former mayor Mike Bloomberg want to guarantee Trump is not reelected, they need to run saturation ads that, using Trump's own words, make the case that his ridiculous refusal to take this virus seriously week after week and his continual downplaying of the danger posed — these incompetent responses, not only the virus itself — have put our nation at risk. Indeed, the website "The Recount" has already produced the video and it is as brutal as the famous 1964 "Daisy" ad about the threat of nuclear war.

To those who object that it is morally wrong to politicize a crisis, I remind them that the goal of electoral politics is to gain political power so as to achieve particular objectives, the first of which is protecting the citizenry. Trump was more concerned to artificially keep the stock market up by downplaying the virus throughout February until just this week than he was in protecting the public health of the nation. Since taking office, but especially since the Mueller probe, he has been more and more concerned to banish competent career government experts from his staff, replacing them with sycophants, ranting about "the deep state," than he was concerned to guarantee our government was prepared to face this kind of crisis. It is true that the virus originated in China. It is also true that the failed government response in the United States originated in the psyche of the president. To speak such truths is not to immorally politicize a crisis. It is to engage in the highly moral act of helping inoculate the country from the reelection of the least competent and most corrupt president in our nation's history.

A friend suggests that just as those made homeless during the Depression were forced to live in tent cities named "Hoovervilles," if the hospitals of the nation reach capacity, and the military erects MASH tents in the parking lots, these should be called "Trump tents." I second his suggestion.

Trump's response to the economic downturn the virus has occasioned is also fair game for criticism. Having passed an unnecessary tax cut in 2017 to juice up the economy and pressuring the Federal Reserve to cut interest rates back when the economy was humming along, the government now has already shot most of the stimulus quivers it possesses. Sen. Mitch McConnell is calling for bipartisanship, even though he led Republican opposition to President Barack Obama's stimulus package in 2009 without shedding a single tear for lost bipartisanship then. Once again it will fall to the Democratic Party to both restore an abysmal economy bequeathed by a Republican president and to overlook McConnell's Machiavellian hypocrisy to appeal to the better angels of human nature.

Not all the blame rests with the president. His principal advisers and the talking heads at Fox News all denied the medical and scientific evidence that was rapidly demanding a stronger and more immediate response. Of course they did. This was not their first time at the denial rodeo. They have refused to admit the danger posed by climate change for years. Catholic climate change deniers mounted prebuttals of Pope Francis encyclical "Laudato Si', on Care for Our Common Home," and their number included such intellectual luminaries as Princeton University's Robert P. George. George's essay was as obscurantist then as was First Things' editor R.R. Reno's latest, calling for the church to ignore the counsel of public health officials. Fool me once…

The change in rhetoric at Fox News, catalogued by The Washington Post, would be hilarious if people's lives were not at stake. The effort to place all the blame for this on China — and the Chinese government deserves some blame to be sure — would also be comic if it was not for the fact that whatever is said about the obfuscation and denial by the Chinese government can be said in spades about Trump and his cheerleaders at Fox News.

It is hard to see how this all plays out well for Trump. Every election comes down to a choice between "stay the course" and "time for a change." But then a thought occurs: the great state of Ohio cancelled its primary election this week; Trump declared himself in possession of emergency powers; any effort to vote electronically risks further Russian involvement. My thoughts darken and that is where we will pick up this thread on Monday.