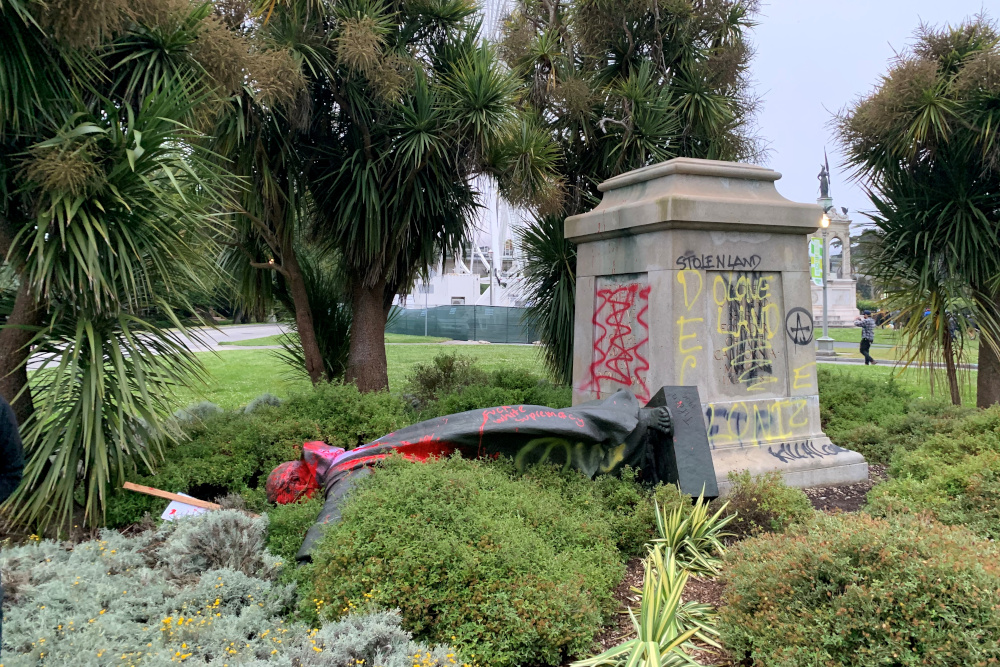 "History is written by the victors," we are told and of course that is true in one sense. But history is actually written by historians, and their interpretations and reinterpretations of events change. It is why a consequential historical personage like Queen Elizabeth I or Habsburg Emperor Maximilian I or Abraham Lincoln requires many biographers. It is why each subsequent generation of the peoples whose history is bound up with these great historical figures must revisit their lives and pose new questions to them. It is why, over time, we learn that their flaws were often as great as their achievements.

Statues are a part of history's account and they tend to be only slightly less malleable than historiographical changes. Sir William Francis Butler was apparently the first person in English to write out the sentiment that "it is the victor who writes the history and counts the dead," and the tale is instructive. He was referring to the unknown number of members of the Gordon clan killed in the Battle of Culloden in 1746, the last serious attempt to reclaim the British throne for the Catholic Stuarts. The United States is dotted with towns named for the victor of the battle, the Protestant Duke of Cumberland, who lent his name to mountains and to a mountain pass, as well as to Prince William County in Virginia. There are Cumberland Counties in Maine, New Jersey and North Carolina.

In England, his reputation declined with the revival of interest in Scottish history and letters (as well as the diminishment of the perceived threat of Catholicism), and a statue to him in London's Cavendish Square was removed in 1868, not quite 100 years after it was erected. By then, Cumberland was no longer a Protestant hero but the "butcher" of Culloden.

In the late 19th century, Britons might have been willing to tear down the duke's statue but there was no effort, and could have been no such effort, to strip his name from its American associations where anti-Catholicism was still pronounced. This was the era of anti-immigrant "Blaine Amendments," which aimed to keep public support from Catholic schools. Catholics were still routinely discriminated against in the U.S. into the first half of the 20th century. Oregon's Compulsory Education Act, a thinly veiled attempt to shut down Catholic schools, was passed in 1922, with support from that state's Masons and Ku Klux Klan. Six years later, when Al Smith became the first Catholic to run for the presidency, Protestants distributed palm cards in Florida that read, "If he is chosen President, you will not be allowed to have, or read, a Bible."

So, when the Knights of Columbus erected a statue to Fr. Junipero Serra in what is now downtown Los Angeles in 1932, a statue that was torn down last weekend, as when they erected statues to Christopher Columbus throughout the land in the late 19th and early 20th centuries, they were taking a symbolic stand against the Klan and its nativism. They were saying that there were Catholic roots in this land, some of which went back as far as the Protestant roots. They were saying that Italian-Americans and Mexican-Americans belonged here as much as Americans whose ancestors hailed from Protestant lands.

Vandalizing a statue erected for such reasons is as objectionable as it was to toss the Pachamama statue into the Tiber at last year's Amazon synod. If we are to debate whether or not Serra and Columbus still deserve a place in the American pantheon, let us debate the issue, not destroy the statues. Let us be mindful that what we might view as objectionable, others may cherish, and not because they are racists.

Four years after Serra's statue was erected in Los Angeles, a statue of Jefferson Davis was installed in the rotunda of the state capitol in Kentucky. It goes without saying that erecting such a statue at such a time was not intended as a rebuke to the KKK, indeed there is no explanation for erecting such a statue that does not, perforce, include a defense of white supremacy. Nor can we excuse Davis' views by saying they were widely held: In the 1860s, when Davis led the Confederacy, most of the world had come to recognize that slavery was evil.

I deplore vandalism, but no one should shed a tear for the removal of Confederate statues erected to nullify the emancipation of the Black Americans that the Civil War had accomplished. On both points, the record of the man and the motives of the statue-builders, monuments to Davis should be removed.

Serra came rather late in the spiritual conquest of Mexico, a conquest that was marred by violence from start to finish. If I were an Indigenous person, I would resent Serra and his fellow friars enormously because their arrival marked the beginning of a cultural genocide. There is no denying this. Serra, of course, did not look at it that way, not because he hated the native peoples. He didn't. It is one of the conundrums of evangelization in the Americas that it was benighted and paternalistic in the extreme, but no one who has read anything about the subject can doubt that the friars thought they were helping their Indigenous charges, that they sincerely loved them, and that many of the native peoples at that time loved them in return.

For example, in the late 16th century, according to the Historia Eclesiastica Indiana written at the time by Fray Gerónimo de Mendieta, the Dominican Fathers took over the mission at Cuauhtinchan, the natives rebelled. They stripped the church of its ornamentation and attempted to starve the Dominican friars out by refusing to supply them with food. Why? They demanded the return of the Franciscan friars who had first converted them.

I deplore vandalism, but no one should shed a tear for the removal of Confederate statues erected to nullify the emancipation of the Black Americans that the Civil War had accomplished.

I am no expert on the California missions, but from what I know of the missions there, and more broadly about how white Europeans interacted with native peoples, however problematic things got with Catholic missions, things got much worse for the native peoples when English-speaking Americans arrived and secularized the missions. The history of Spanish conquest was often brutal, but only the English took an exterminationist approach.

Serra evangelized in ways we would never think to do today, but if we had lived when he did, we are fooling ourselves if we think we would have evangelized in ways markedly different from those he employed. We should never examine such cases anachronistically, judging him by the standards of our day, not by the standards of his own time, in order to make him into a bad guy. It is wrong to simply tear down his statue on his own merits, and even more so when you consider the reasons that statue was erected in the first place, to demonstrate that Spainard Catholics were a part of the American story.

It is an odd fact of Western culture that while we nod when told the victors write history and see that they are the most likely to be memorialized in stone and statuary, nonetheless the most common human image in Western art is not a scene of victory: The crucifix does not portray human victory. Statues of the risen Lord or of the empty tomb are not unknown, but they pale by comparison to the sheer number and variety of crucifixion portrayals. Further, it is a remarkable fact that it is this image of the crucified that has so often moved the hearts of the serfs in Russia and the slaves in Alabama and the Indigenous of Chiapas. Remarkable, too, that images of his mother have found such a prominent place in the spiritual devotion of the poor throughout history.

Monday, at Mass, the Gospel of the day was from the seventh chapter of Matthew:

Jesus said to his disciples: "Stop judging, that you may not be judged. For as you judge, so will you be judged, and the measure with which you measure will be measured out to you. Why do you notice the splinter in your brother's eye, but do not perceive the wooden beam in your own eye?

In our multicultural society, we need to invite each other to discuss what constitutes a beam and what a splinter. America's puritanical streak often wears the mask of moral reformation, from the Salem witch trials in the 1690s and Prohibition in the 1920s, but the Gospel points us in a different direction. Those of us who are white Christians have a moral obligation to sympathize with the sadness an Indigenous person feels when he or she sees a statue of Columbus or Serra, but no one is obligated to applaud historical anachronism. The vandalism of the statues should stop. And we should all contemplate this humbling fact: None of us knows what things we do now will, 200 or 300 years hence, be viewed as barbaric or inhumane.