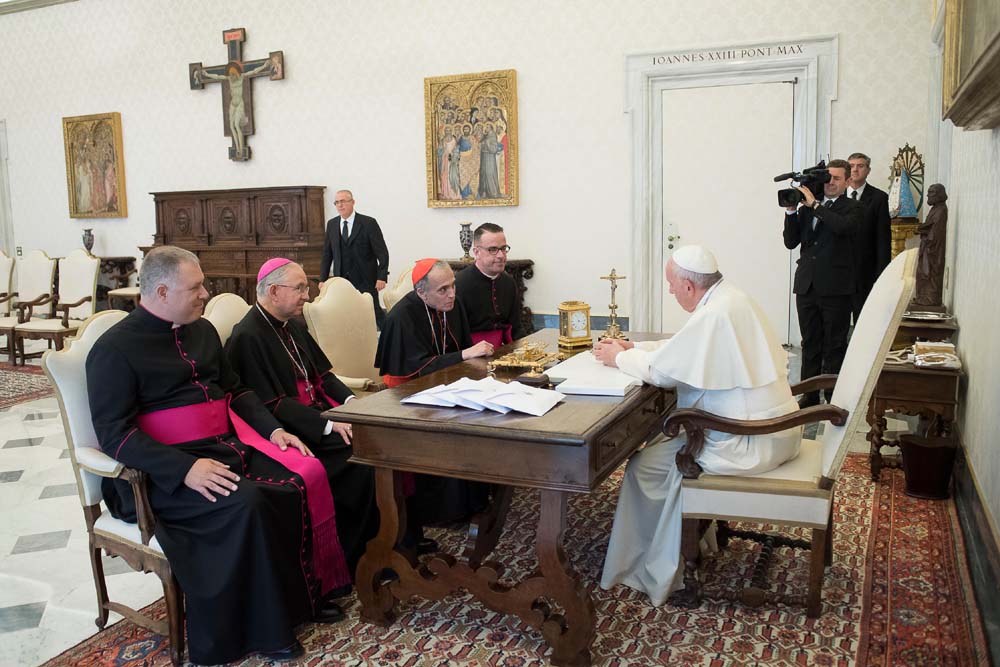 Two weeks from today, the bishops of the United States will begin assembling in Baltimore for their annual plenary meeting. On Monday, Oct. 30, I will look at the agenda for the meeting, but this morning I would like to take note of the fact that this year marks the 100th anniversary of the establishment of the bishops' conference, examine briefly how the U.S. bishops' conference began, and how those beginnings remain relevant.

In the first half of the 19th century, the U.S. bishops met 10 times for Provincial Councils of Baltimore, beginning in 1829. These councils crafted the early canon law for the church in the United States, determining the rights of clergy (although it was the Roman officials who sought to give priests greater rights over against the authority of the bishops), calling for the establishment of parochial schools, and discussing other areas of mutual concern. By mid-century, New York, New Orleans and Oregon City were named archdioceses and three plenary councils were held, all in Baltimore, in 1852, 1866 and 1884. After that, the archbishops met annually to discuss matters of common concern, draft memoranda for Roman authorities, and draw up ternas to be sent to Rome whenever an archbishopric became vacant. There were, then, both formal, canonical expressions of collegiality and synodality, as well as more informal ones, throughout the 19th century. The bishops certainly did not always see eye to eye: The hierarchy was bitterly divided in the 1890s, for example, between the Americanizers who wanted the church to inculturate itself to American ways, and those who resisted any amelioration of national identity and were suspicious of the ambient republican ethos. In important ways, that division is with us still.

In 1917, the immediate reason for forming a permanent nationwide organization was the facilitation of the war effort. On Aug. 11, 58 dioceses sent delegates to a meeting at the Catholic University of America and agreed to form the National Catholic War Council. The metropolitan archbishops, at their annual meeting that autumn, approved the formation of the council, and Paulist Fr. John Burke was named director. The organization coordinated the supply of chaplains to the military, the provision of Catholic literature for the troops and, ironically, financed the work of the Knights of Columbus among the troops. Today, the bishops turn to the Knights when they need something financed.

When the war ended, and with the support of Cardinal James Gibbons of Baltimore and the approval of Pope Benedict XV, the bishops decided to make the organization permanent, renaming it the National Catholic Welfare Council. As historian Jesuit Fr. Gerald Fogarty has observed, Gibbons "was, in fact, though not in name, the Primate of the American Church." He had carried on virtually all the church's business with the government by himself, not only because of his seniority among the hierarchy but because Washington was still then part of the Archdiocese of Baltimore. The Vatican, too, used Gibbons as their primary agent with all other bishops as he was the only cardinal in the United States until 1911. Gibbons recognized the need for an organization, and saw the National Catholic Welfare Council as an extension and improvement of the collegiality of which he was so proud. (Gibbons was also the last surviving attendee of the First Vatican Council.) As well, Gibbons knew his time was drawing near and, indeed, he died on March 24, 1921.

No sooner was Gibbons buried, than Cardinal William Henry O'Connell of Boston, who was now the senior cardinal in the U.S., launched an effort to strangle the bishops' conference in its crib. He aspired to play the central role that Gibbons had done, but this was never likely to happen. O'Connell had depended on Roman patronage to get himself named a bishop, archbishop and later cardinal. A blustery personality, he had none of Gibbons' diplomatic touch. He considered the Sulpicians, who then as now ran the seminary at the Catholic University of America, as his bitter enemy and he considered them and their protégés to be at the heart of the project of forming a bishops' conference. "For with S. Sulpice we can see only an enemy not merely personal but also in principle," he wrote about the Sulpicians and their influence on the nascent conference. O'Connell and the newly minted Cardinal Dennis Dougherty of Philadelphia arrived too late to vote in the conclave in February 1922 that elected Cardinal Achille Ratti as Pius XI, but while in Rome, O'Connell secured a condemnation of the National Catholic Welfare Council from his old friend Cardinal Gaetano De Lai, then at the Consistorial Congregation, now known as the Congregation for Bishops.

Cardinal O'Connell overreached and most of the hierarchy appealed to the new pope to overturn the condemnation. Cardinal Dougherty supported O'Connell, but Rome supported the majority of the bishops who wanted the National Catholic Welfare Council to continue. The champions of the organization were different from Gibbons: They, like O'Connell, were dependent on Roman patrons, but the reign of Benedict XV and now Pius XI had introduced new cardinals in Rome who were not reactionary: Dominican Cardinal Tommaso Pio Boggiani, for example, had had Dominican Archbishop John McNicholas of Cincinnati as a student, and Archbishop George Mundelein of Chicago was close to Cardinal Giovanni Bonzano, who became a cardinal in 1922. Both American archbishops had signed the petition calling for the bishops' conference to continue. As well, McNicholas and Mundelein represented the rise of the Midwest in the hierarchy: Mundelein, a native of Brooklyn, had been about to be named the Bishop of Buffalo in 1915 when the British government requested the Vatican not appoint a bishop of German ancestry to any diocese that bordered Canada. So, Mundelein was sent to Chicago after the death of Archbishop Quigley instead. The last-minute change, initiated by the British government, would change the face of the Catholic Church in this country for a generation as Mundelein not only emerged as the leader of the second generation of Americanizers, he also placed a far more progressive face on Catholicism than would have been possible if O'Connell or Dougherty had ever acquired the authority that Gibbons had wielded.

Mundelein and the bishops who led the conference were on the same page. In 1919, the bishops adopted a plan for social reconstruction after the war that was the handiwork of Fr. John Ryan, a professor at Catholic University who also led the National Catholic Welfare Council's Social Action department from its inception until shortly before his death in 1945. He outlined a set of policies that O'Connell labeled "socialistic" but which would find their way into the national fabric during the New Deal of President Franklin Roosevelt: unemployment insurance, Social Security, and a minimum wage. Mundelein and Roosevelt became close friends, and in 1936, Mundelein all but endorsed FDR for reelection. The church, as a matter of principle and demographics, was deeply involved with the labor movement and one of the reasons the labor movement in the U.S., unlike some of its European counterparts, was never tainted with communism was because of its Catholic leadership. In 1924, Ryan clashed with O'Connell over the proposed constitutional amendment banning child labor: O'Connell thought the proposal an infringement on the rights of the family, while Ryan saw it as enlightened public policy that embodied the church's teaching on human dignity. Such early tensions could be classified as fights between the teaching, and the memory, of Popes Leo XIII and Pius XI versus the more reactionary Pope Pius X. In each of the clashes, Mundelein and the more progressive bishops were able to exercise greater influence because they worked with and through the National Catholic Welfare Council.

The history of the bishops' conference is not a history of a united episcopacy standing up to Roman authorities. Instead, the history of the conference is one in which, from the beginning, two visions of the role of the church in the modern age have coexisted, sometimes in bitter struggle, each side appealing to different allies in the Vatican curia. So, it should not surprise that today there are some bishops who seek greater engagement with the ambient culture while others prefer the church to draw clear distinctions between itself and the ambient culture. Some favor dialogue and process and others value clear stances and see no role for discussion. Such differences can be found in virtually every decade of the conference's history.

The conference has served as a check on powerful cardinals in their midst: first O'Connell, later Cardinal Francis Spellman, and most recently, Cardinal Bernard Law. All three tried to impose their views on the conference at a time when their stock in Rome was high, and all three were checked by the opposing authority of a majority of the bishops' conference. And, in all cases, from the support for the New Deal in the early years to the support for the pro-life movement in more recent decades, the bishops' conference provided an avenue for what theologian Bernard Haring called the "reciprocity of consciences," a place where dialogue prevented any one bishop from mistaking his perspective for the whole, where the relativism that comes from being born in a certain time and place, and schooled in a certain way, is checked by being brought into discussion with those with different perspectives. That is the value of synodality and collegiality.

What is different about today is the degree to which some bishops are more or less willing to openly challenge the pope and the fact that the conference staff is unwilling or unable to affect the kind of dialogue and forge the kind of consensus that once characterized the conference's work.

From its first major document, the plan for reconstruction after World War I, until the 1980s with their powerful pastoral letters on nuclear arms and the economy, the bishops' conference engaged important national issues and applied a consistent and coherent moral perspective. Sometimes, their positions were consequential politically, other times not, but they let Catholics know how our faith related to the issues of the day. Monday I will look at the piddling agenda for this year's meeting, an agenda that marks the decline of the conference and its significance for American society.