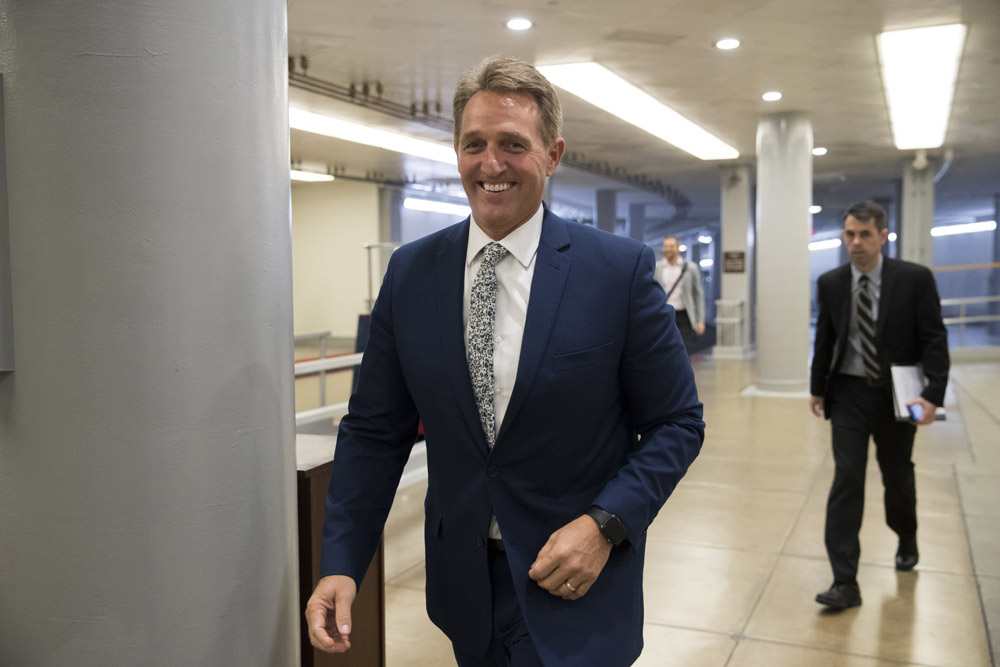 Sen. Jeff Flake, R-Ariz., a member of the Foreign Relations Committee, arrives for the start of a closed-door security briefing at the Capitol in Washington on Oct. 25, 2017. (RNS/AP/J. Scott Applewhite)

At Politico, the full text of Sen. Jeff Flake's speech calling out President Trump and announcing his own decision not to seek a fourth term. It was a remarkable speech, a profile in courage, and puts one in mind of another great Republican senator, Sen. Margaret Chase Smith, who stood up to Sen. Joe McCarthy when it was not yet politically astute to do so.

At The American Prospect, John Gehring on the rekindling of the relationship between organized labor and organized religion, specifically the Catholic Church. Here are the seeds of a renewal of the Democratic Party whose leaders should especially pay attention to the comments of Damon Silvers, policy director at the AFL-CIO, on the need to touch people's spiritual yearnings, not merely reduce them to their economic significance.

From the BBC, Tesla is installing solar panels at a children's hospital in Puerto Rico. If Puerto Rico rebuilds its grid without taking advantage of the ample solar and wind resources on the island, it will be a grave mistake.

Pope Francis warns us against ideology. Exhibit A: The Trump administration is muzzling the government's own experts in the Environmental Protection Agency, preventing them from giving presentations on climate change. This is insanity, and dangerous insanity. Those like Trump, his EPA administrator Scott Pruitt, and the Koch Brothers who fund climate change deniers, all will answer before the judgment seat of God for this evil work they do.

LifeSiteNews has begun the drumbeat against Cardinal Blase Cupich who has been nominated to lead the U.S. bishops' conference's Pro-Life Activities Committee.

The inimitable Fr. John Zuhlsdorf compares those of us who defend Pope Francis with Mao Zedong's Red Guards. I think that's a stretch. My copy of the Little Red Book says nothing about synodality, for example. But, this paragraph warmed my heart:

As you read blogs or watch Twitter, watch for this phenomenon, the pattern of, first, an accusation (even with something untrue or inaccurate) from one of the cadres of the chaos (e.g., James Martin SJ,  Antonio Spadaro SJ,  Thomas Rosica CSB,  Michael Sean Winters, Robert Mickens, Gerard O’Connell, Joshua McElwee, Andrea Grillo, Austen Ivereigh, Massimo Faggioli, etc., and entire publications  general such as Fishwrap, The Tablet (aka “The Bitter Pill” now pro-abortion), Jesuit-run Amerika, Commonweal, La Croix, etc.), followed by the echo-chamber of hate and division.

It is a great honor to be lumped with such fine writers and fine Catholics as the others on this list. Thank you for the compliment Fr. Zuhlsdorf.